A peice of fiction about the women who manned the Anti-Aircraft weapons during WW2. 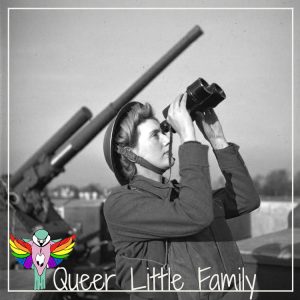 Image from The Female Solider

It was late into the night but Gwen was still awake, listening to the thuds of the rain on the tin roof of the dormitory. Staring straight up all she could see was the empty bunk above her. Molly was curled around her, snoring softly both warm and pretty.  It was a comfort in the cold air, they had shared a bunk since their first week together. It wasn’t quite big enough but that just meant they had to lie close together and Gwen needed that. Needed her.

She had spent more night like this, lying awake holding her girl and wondering what would come first: breakfast or bombers. She wondered if she would’ve been better off driving ammunition trucks like she had been before.

She wouldn’t get the chance to find out now. Soon either exhaustion would find her or the Germans would and it wouldn’t matter either way.

Those first days when they had first put their training in the practice and had really tested their nerves a lot of the girls had gone home. Joan had gone back to nursing, Anne back to making weapons. Mary had just disappeared one night with one of the Irish soldiers on the base. She had almost left herself but had felt duty bound once they had arrived on the Norfolk shores and she had met Molly so here she was. Catherine to her right, Lucy to her left and Molly curled around her. All of them asleep while she waited for sirens.

She almost fell out of the bunk at the sound of the alarm but there was no time for anyone to stop and laugh at her misfortune. She didn’t stop to think about it either. The last time she had fallen out of bed she had sat on the rough oak of her childhood bedroom laughing with her sister but she didn’t even let the memory surface. Instead, she raced to lace up her heavy boots and pull on the scratchy grey coat. Only when she adjusted the strap on her on her tin hat so it didn’t fall over her eyes did she see Molly doing the same.

They had gotten into this routine easily, too easily perhaps.

“Come on Gwen, let’s go!” Catherine’s voice could barely be heard over the pelting rain and sirens but it was enough to get both Molly and her moving. It was dangerous to linger, to think, you just had to react, do your job and she raced after Catherine, Molly on her heels.

They just had to do their job.

The door flew open, slamming right around into the wall, letting the rain and the wind whistle through the opening before a large figure appeared in the low light.

They ran after Moor, out into the rain. The sergeant had been serious but kind during those first days but not he was all business. He watched as they filed out of the dorm then, shouting orders and shoring them up.

Gwen got to her gun and felt a hand on hers, Molly squeezing it tightly before she ran on, hunkering from the rain with Catherine. It was a moment Gwen hadn’t allowed herself but Molly had offered her anyway. They were still together, even under the enemies eyes. Inside the dorm, they could have all the moments they wanted and Gwen had accepted that outside they were simply drones.

Molly had not felt the same way.

It made her feel better knowing that.

“Junkers heading south-south west,” Eileen’s voice was almost lost in the noise of the those very same bombers.

“In position!” Gwen didn’t catch who shouted that but if she didn’t run she would be letting both her team and her country down.

Ignoring the weight on her shoulders, the rain making her gear heavier, calling out instructions as she did so. As she was supposed to.

“Everyone, get ready,” came the Sgt’s shout. “Just do your job.”

So she did. Keeping upright in the mud, ignoring Catherine’s stumble and Molly’s already bloody face. Later, she could care and worry and kiss her better later. So she didn’t stop to ask how her girl had been injured, only hoped she was still able to do her job. Only hoped they all made it back again.

She only paused the climb into her seat and aim.

That was the last thing she heard before she pulled the trigger and gunfire echoed around her.