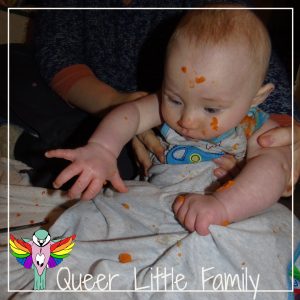 We’ve started weaning Snappy. Though weaning doesn’t seem like the right word. Weaning indicates that we are taking something away from him, weaning him off breast milk and onto food but that isn’t what we’re doing. If anything we’re planning to breastfeed for another six months at least – and feed him food. We’re just adding mush.

The reason we started was because he started lunging for food. Face first. I got a message one day from bethend who told me Snappy had gone head first into her jacket potato and beans. Later on he managed to get hold of some bagel. He’s crazy for tea. The kid wanted food and who were we to deny him. I bloody love food.

We started with peanut butter.

Just a bit on a spoon for him to try and he loved it.

We started making mush then, we had some sweet potato in our own dinner, and gave some to him. With a bit of breast milk at first to see if that would make it appetising. Turns out not so much – not that he didn’t like it, but when we gave him some without milk in it he much preferred it. To be fair, I don’t think I’d want milk in my sweet potato mash either. We started mixing it with peanut butter because it meant it stuck to the spoon better. And he liked it more. 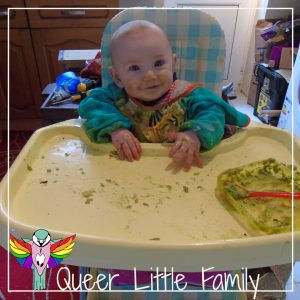 Mush is now part of his daily routine. He wakes up and talks to himself and his dolly until he is either loud enough or upset enough to wake my wife. She feeds him – one of his big feeds – and when he’s done she turns him over and leans him on me. Then he pulls my hair and my face until I wake up. I can sleep through a lot but not my son tugging on me – he’s got a hell of a grip.

If I’m working we both get up. Me to get ready for work, her to start his day. A day which now starts with a lid (he can grab a tupperware lid) of mush mixed with peanut butter. He’s had sweet potato, carrot, banana and avocado. He also likes toast, a lot. I gave him some toast as a distraction when we were having lunch one day. He loves gumming on toast. We’ve also let him gum on some dried mango, he liked that a lot so we give him some of that sometimes when he’s out and about. More so if it has avocado or peanut butter on it.

We’ve found though that if he has two ‘meals‘ a day he gets a little bit constipated. His stomach is still quite small I suppose and his digestive system is still getting used to food that isn’t milk. He’s get there though, bit by bit. 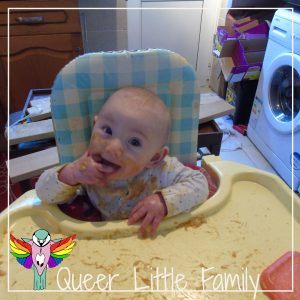 Next week I want to introduce him to some more things he can learn to chew on. And by chew I mean gum into a fine mush and possibly swallow or spit up all over his clothes and the cool smock I bought him from Morrisons. I’ve been going on about getting him a smock for a while and I just happened upon it. Was only three quid. He wears it most mornings now, and we wipe it down and let it dry and wash it every few days.

I look forward to him trying some broccoli and boiled carrot sticks rather then just mush. I can see him chewing and swallowing. He prefers to try and feed himself but he will let me feed him. I think he’s starting to figure out that if he lets me feed him he gets to actually eat more of the food. Smearing it everywhere is great and all but he really likes eating. 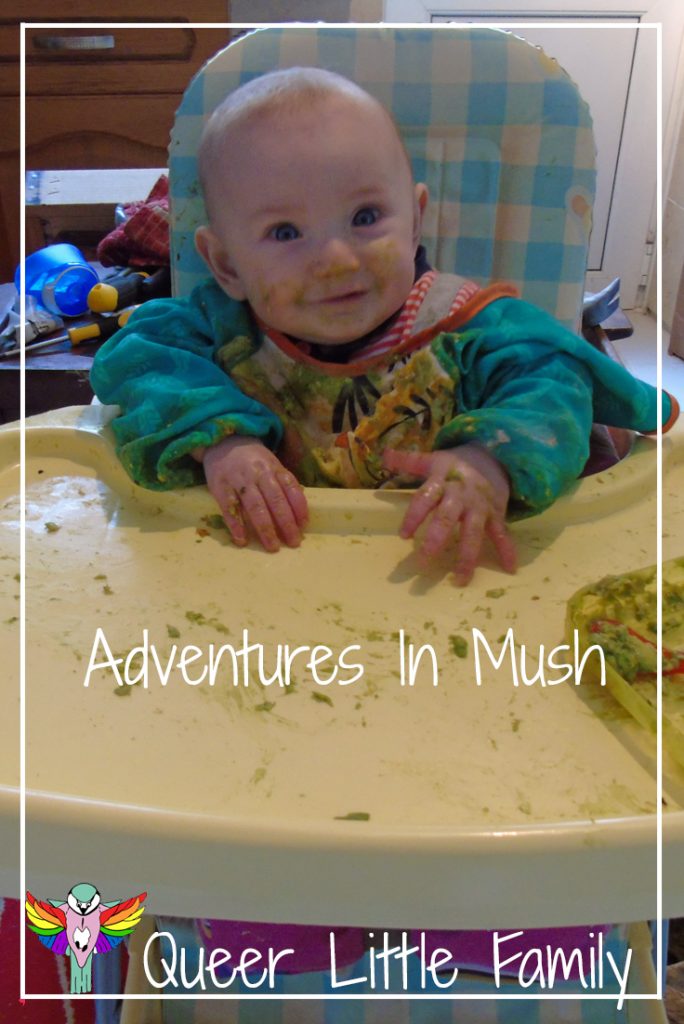 9 Replies to “Adventures In Mush”