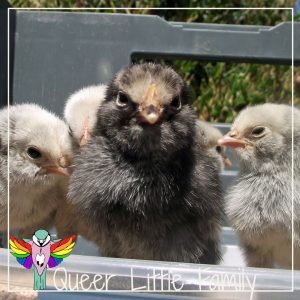 People kept asking us if and when we’re going to get rid of the animals.

We have four cats, six chickens, a rooster and a hamster. Oh and some tadpoles.

We’re not getting rid of any of them because we’re having a baby. We may find a new home for Feathas the rooster because it’s just not practical to keep a rooster but we’re adding to the family not replacing members of it. We were a family long before the pregnancy and that includes everyone – tadpoles included. Though we won’t keep them all because it’s not really practical to have two dozen frogs living in the house. We just don’t have the room.

I don’t really understand the mentality of it really. The idea that we should get rid of some of these family members because of another. I’ve asked people why they think we should and the answers vary to the fairly logical – cat litter is dangerous to pregnant women and babies – to the downright reprehensible – you won’t have time for them.

The cat litter is a non-issue. I change the litter, my with doesn’t go near it. Simple enough. Plus the cat litter trays are big enclosed tubs with lids. She hasn’t changed the boxes since we started trying to get pregnant last year.

I get told the cats aren’t safe around the baby, and find this a bit insulting – as if I’m going to leave the cats to raise the child or smother it. No, I know what the cats are like, I’ve woken up enough time with a face full of cat and a nose full of fur to know they could be dangerous around Snappy when they’re little. We already have ideas for dealing with that – mostly lids for the cots.

That fact that we won’t have time for them is the most annoying. It’s takes me five minutes to feed the cats and the hamster. Longer for the chickens. Ten minutes to empty, clean and re-fill the litter trays. I live in hope that Snappy will sleep long enough for me to do these things, babies sleep right? Plus have you tried to deny Reb Brown any attention? He’s six kilograms of fluff, when he wants to sit in your lap he sits in your damn lap and becomes an immovable blob. It would be quite impressive if it weren’t so annoying. Merry screams and headbutts you until you fuss her, Pogo is happy to stand very close to you and purr loudly (then sneeze on you) and Seymour will follow you around for fuss (with screaming).

They’re worth the effort (most of the time), they’re part of the family.

One woman bethend knows gave up a dog already.

I find that pretty deplorable. If you can’t look after a dog and a baby, you shouldn’t have gotten pregnant in the first place. Or gotten the dog.

The cats are as much part of our queer little family as Snappy is. And it’s important for kids to be around animals and learn about them. Also, it doesn’t make much of an impression if we just give up on them because they’re an inconvenience to us, what sort of a lesson is that to my child?

Just thinking about the fact that we might have to give up little Seymour was heartbreaking. I don’t think I could live with the reality of it. I still miss my old cat Mickey.

What about you? Have you given up an animal because you were having a kid? If so why? 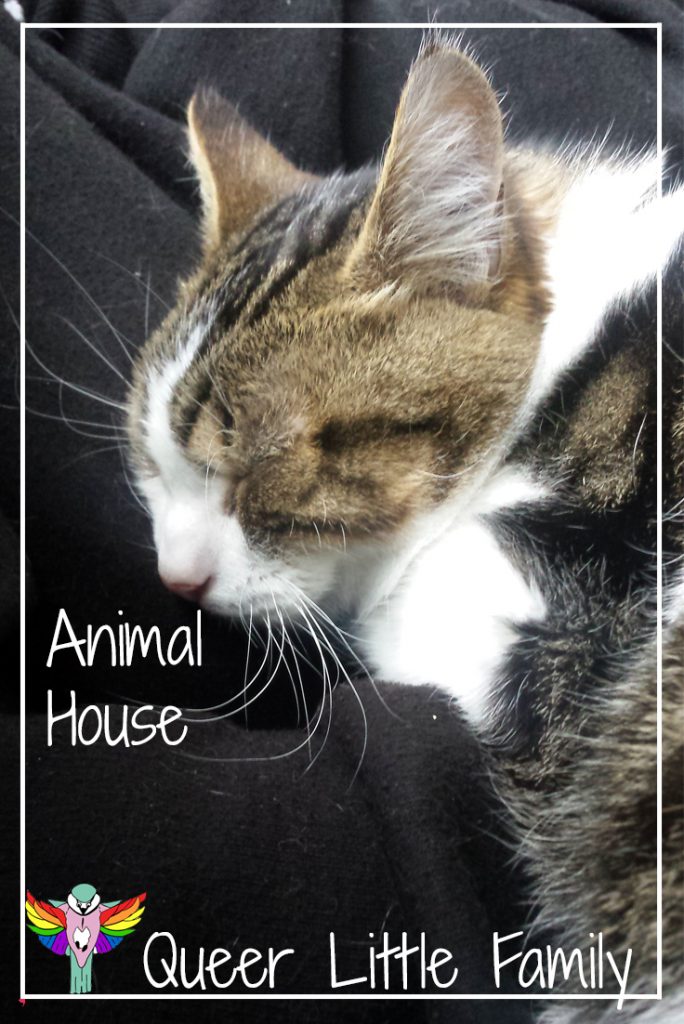