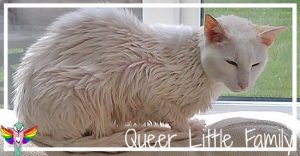 When Bread listed the subjects her blog covers, I decided to write about cats. Since my own blog Dog Days and Delights relates to parenting and creative writing, and the other blog that I write for is Worthing Mums (the clue’s in the name), my cat doesn’t get much of a look in. I did post a picture of her after she’d been in the shower – for which she’s never forgiven me – but that’s as good as it’s got for her.

Like the cats Bread writes about, Esme is a village cat, but we live in a village in West Sussex, on the south coast of England. When I was growing up, we had Siamese cats, so I decided that when I bought my own home, the first thing I would do was get a Siamese. In hindsight, I should have found a more reputable breeder. There is no way she’s pure Siamese or Oriental. When she was a kitten, she had black blobs on top of her head, but she has become pure white as she’s grown older. 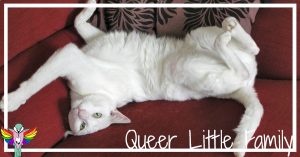 Upside down am I.

Esme is an old lady of sixteen. Apparently that’s equivalent to about eighty in human years. She has lived in five different homes – if you include the outdoor pen she was raised in. When I first got her, she was always being beaten up by neighbouring cats. She cost me a fortune in vets’ bills! She was also a great hunter and once brought me a dead rat that was almost as big as her.

After we moved to our second home together, I met my husband. Being part-Siamese, Esme is quite highly strung. This new person was a bit of a challenge. How could she protect her mum? She decided to wee on all his things. Despite this, he stayed! There was another occasion when we had a mouse problem with the computer. Every time it was switched on, we smelt burning. We were on the verge of buying a new computer when I found the cause of the problem. Esme had left a dead mouse next to the PC and it was heating up nicely every time we switched it on. 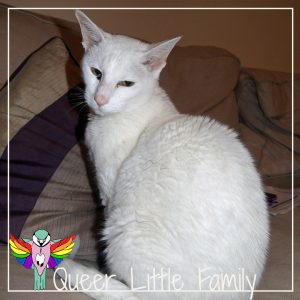 By the time we moved to the village, she was already getting on a bit, and was no longer a hunter. At sixteen, she sleeps more than she used to but is very healthy for her age. The average life expectancy for domestic cats is 15 to 17 years, but the world’s oldest cat lived to be 38. As I write this, Esme is sitting on my lap. I’m hoping she’ll be around to help with my writing for a few more years yet.