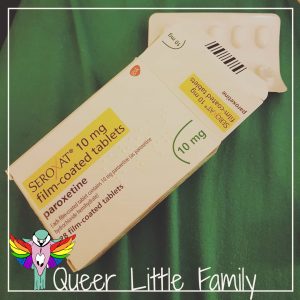 At the beginning of April, I started to come off my medication. My depression had hit a four year low, and my anxiety a four year high. To be honest it was all because of work. That was the root of my issues, and I realised then that my medication was no longer fit for purpose.

I’ve been on Seroxat (the generic name is paroxetine but I’ve always been given the brand for some reason) for about a decade. It was one of a few different medications I’ve tried for my anxiety and depression and at the time it made the difference. I didn’t really notice any side effects, but my anxiety was better and so was my depression. Not markedly so but enough to survive, to get by, without being suicidal or agoraphobic. My social phobia was really bad back then. It took a little while to get into a groove with them and adding Tegretol on as a mood stabilizer a few years later helped. I wasn’t diagnosed with BPD formally until a few years after that even but my GP seemed to think I needed them.

The Tegretol definitely helped with some of my outbursts. I came off that about a year ago because I just didn’t feel like I needed it anymore. The BPD diagnosis still stands, it’s never going away, but the worst of the symptoms have settled or subsided.

Medication Is A Good Thing

I was one of those people who didn’t want to comply with their medication. Because anti-depressants were bad. They changed you. I believed the stigma.

Needing medication for mental health problems is not a bad thing. There is nothing wrong with taking anti-depressants, mood stabilizers, hell, even tranquillisers if you need them. They are not “mind benders”, they do not turn you into zombies (and if they do, you need to either change the dose or change the medication). You may or may not be on them forever. Some are addictive, more aren’t. They save lives, they change lives, they can make the difference.

The first one you try might not work. But it might. What have you got to lose by trying? And what do you have to lose by supporting your friends or family who are taking medication? 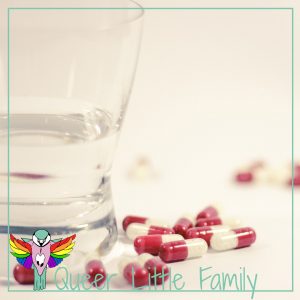 The stigma around medication helps no one. And no, medication isn’t going to make everything better, but it can help and sometimes that’s enough. Given the state of mental health care in the UK, it may be your only option while you sit on a long-ass waiting list for counselling, therapy or whatever else you need.

Coming Off My Meds

I’ve played with the idea of coming off the Seroxat for a little while. I wasn’t sure I really needed it anymore, let along such a high dose. I’ve had some GPs say I couldn’t have more than 60 and some say I could have 80mg. I hit 60mg pretty early on and stuck with it for most of my time on the medication. What had always put me off was the fact that any time I missed a dose or two (or a few) the withdrawals were a bitch. The headaches come first, then complete physical anxiety attacks, then suicidal ideation.

I wasn’t keen to experience any of that.

But it wasn’t really helping anymore, in fact, it was making my OCD worse. I’m not formally diagnosed with OCD that I know of (you lose track sometimes), but I had mentioned when I first started taking it, that it was making my OCD worse. I noticed on February how bad my eating issue had gotten (I’m a very fussy eater). Any dinner with meat in it was becoming very difficult to eat and impossible to enjoy.

So I needed a change but I had to get off the Seroxat first. 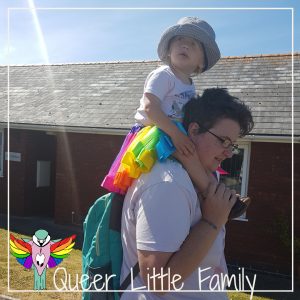 The worst of those withdrawals haven’t happened this time around. At least the bit where I end up in a pit of despair. The headaches every time I went down a dose were awful, not migraine bad but enough that I actually asked for a box of 100 of my painkillers instead of the thirty I get from time to time. They passed after a couple of days, but I had to take the prescribed dose of painkillers (1-2 every 4-6 hours when required).

The anxiety was bad too, it’s only the last two or three weeks that I’ve not woken up to a panic attack or in the middle of a panic attack. My GP had already prescribed me a beta-blocker propanolol which works on the physical symptoms of a panic attack. So I’ve been taking one of those most mornings since April.

Coming down to 20mg was pretty easy, things got harder after that. I was going down by 10mg every two weeks; slower than my doctor had suggested actually. When I hit 20mg the anxiety got worse, but that was compounded by work and money issues again. I stuck with 20mg for a while so I go to some job interviews and then tried went down to 10mg.

I tried going from ten to zero but that was awful. The anxiety was just unlivable. It really affected us all and it just wasn’t fair to my wife and kid. They shouldn’t have to suffer when I am. The propanolol helped but I can only take 40mg of that a da because it lowers your blood pressure and mine is on the low side of normal most of the time so any more would make me dizzy. I’ve got a lower dose tablet now cause some days even the 40mg made me dizzy.

So I went back on the ten for a little while, to get my head straight again before I started snapping the tablets in half and taking 5mg. That went okay actually, same as before. Headaches and panic attacks. I let my mind and body get used to that dose for a bit while dealing with life (work, interviews, toddler).

Now it’s been three days with zero Seroxat. I went from 5mg to 5 mg every other day to none because life is evening out and I feel really, really sick. I was dizzy on the days without Seroxat but not having had a propanolol to cause it. I kept going though cause I was so close and not it’s been three days and I can’t shift the headache but that will pass soon. The dizziness isn’t as bad a sit was, it doesn’t help that I finally caught the stomach bug that is going (my son had it last week).

I’ll stay off it though. People have been saying I shouldn’t be doing this now but I’m sure the worst is past. There’s never going to be a better time than now to get off it. There is no good time to change medication, come off it or start it. You just have to do it, would’ve appreciated a little more support in doing it though. It’s taken me three and a half months to do it.

I won’t be seeking more therapy, counselling or any other services from mental health. I’ve had therapy a couple of times and plenty of counselling. I’ve got as much as I’m ever going to get out of it. I had an OT for a while too. Recently they offered me a mindfulness course but I refused because I didn’t like the woman who offered it to me (she was dismissive and condescending) and I don’t think much of mindfulness.

I don’t know if I’ll try something else though. I don’t feel nearly as bad as I did in March and when I originally thought about coming off then I didn’t think I need them or anything. I’ve talked about it with the GP but right now the beta-blockers are good enough for the physical symptoms for now and we’ll see how things go.

If you have any questions about any of this or about my experience with other medications or my diagnosis please don’t hesitate to get in touch. Leave a comment or use the contact form. I will talk about any of this and help in any way I can. 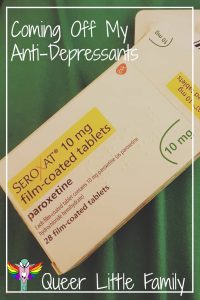 7 Replies to “Mental Health Mum: Coming Off My Anti-Depressants”