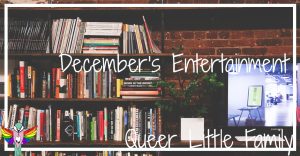 It’s 2018 – so it’s time for December’s entertainment. Which isn’t just Christmas films I promise.  This month has been pretty hectic as usual with work and a toddler who is just getting into his tantrums.

We’ve been watching Stargate still though we’ve gotten up to halfway through season eight and got a little distracted. So we’ve re-watched all over the new MST3K, and then started watching Lewis.; which I bloody love. We’ve always watched everything on our Christmas playlist and started watching Season O of QI.

I’m behind on my reading but I got the Horizon Zero Dawn art book for Christmas which is both gorgeous and interesting. Bethend has read a few books including a reread of Cugal’s Saga by Jack Vance, Tiger In The Smoke by Margery Allingham and The Big Over Easy by Jasper Fforde. Snappy has new books for Christmas including one signed by Sali Mali, A Mr Man book and Ten Little Dinosaurs.

No poetry, well an unfinished poem, but we’ve had posts about My Top Five Cat Related Injuries, and our Day Out In Coventry. I’ve also written a couple of posts on Medium; Why I Won’t Work With Brands and Don’t Dismiss All Problems As ‘Parenting’. These are available to Medium members for a fiver a month or to my patrons for two quid a month.

We’ve been to see Sion Corn (Santa) at the village hall Christmas fair. I sold some pictures and we ran a guess the amount of snowflake competition. We also went to a tots Christmas party also at the village hall. That was chaos but fun. That same day we went to my works Christmas dinner – and my son spent his first night away with his auntie Sian. I’ve yet to write about the experience but it was easier than I thought it would be.

Having finished Horizon Zero Dawn I haven’t played much PS4 this month. I have been playing a lot of Pokemon GO. I had stopped for a while but my friend added me to her Whatsapp group for Pokemon Go and it got me back into it. I’m about halfway to being a level 29 and almost finished walking my Scyther Simon before I have enough candies to evolve him.I’ve also been playing a lot of Carcassonne since it came out this month as a steam game. We have the board game but that’s not always easy to play with a toddler around. So I got a copy of this and of course one for my wife.

And it’s been Christmas. Snappy got so many presents. We got him a wooden train set and we’re going to Dublin to see his Godmother this week for a few days. He got a lot of toys from family, wooden toys, a plate and bowl set of his own, wellies, books and bath toys. A little bike. My wife got a scroll saw from her day and I got her some slippers. I got a hard drive and the art book as well as the DLC for Horizon Zero Dawn. We saw my mum and stepdad Christmas eve, and my sister and the kids later on. Then we had dinner with our friends before church in which Snappy talked and laughed through the entire service. But no one really minded – none of the church regulars at least. They know us and our son. 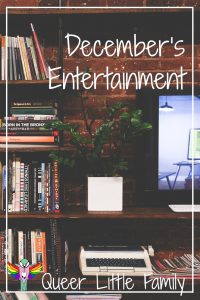