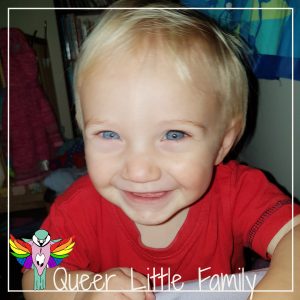 Not everything is just part of being a parent.

A few months ago my son was ill.

Not unusual, kids get sick. They pick up germs from other kids, from us, from putting anything and everything in his mouth. He’s been sick before and he’ll be sick again.

This time around was different. He had Hand, Foot and Mouth and was very ill on Saturday, and Sunday. By the time Sunday evening came around he seemed better. But he would not sleep. He wouldn’t lie in his cot, he wouldn’t sleep in bed with one of us, with both of us. He just would. Not. Sleep.

He always sleeps. He’s asleep right now. From the age of six months, he started sleeping through the night nearly every night. From nine months it was every night. From six pm right through ’til the morning. He’s a really good sleeper unless he’s sick.

I took that picture at two am and posted it on facebook asking for help.

I did not get help.

Aside from the people who thought it was funny, most people just commented on it with words similar to “welcome to parenting.”

I get it, this is my first kid, I’m a first-time mum, getting up at night is par for the course and there have been times where it is just part of being a parent.

But not always and that night, being up at two am with a toddler that will not sleep was distressing. Not because it meant I could not sleep but because it was just so out of character for him that I was worried about him. He was hyper, awake but exhausted, you can see it on his face, the red rings around his eyes. He was tired but wouldn’t sleep.

He wouldn’t even lie down.

And that’s not funny.

And that’s not even the problem.

Nights like this may be part and parcel of parenting. Sleepless nights, snotty noses, dirty nappies. Fussy eaters, tantrums, hitting or missing milestones. These are things all parents deal with.

These are all normal.

These are still things parents need support for. Just because it’s ‘parenting’ doesn’t mean it’s easy. Or parents are coping. It doesn’t mean we should just leave parents to it because you’ve already gone through the same thing. Regardless of whether you got support for your own parenting dismissing the worst parts of parenting is not helpful. Even if people are not explicitly asking (or crying out) for help parents still need your support when their kids are sick, or having tantrums or not sleeping. 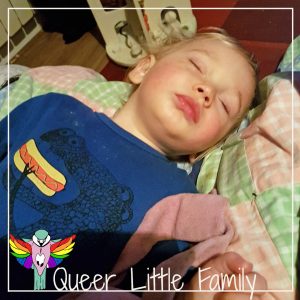 Why do we dismiss problems people are having as just parenting? If someone wasn’t getting any sleep for weeks upon weeks we would suggest all manner of ways to help them sleep from Sleep hygiene to medication. But once the cause is a child it becomes ‘parenting’ and there is nothing else to be done about it.

I don’t know the answer to why these aspects of parenting are so easily dismissed, despite them causing for more serious problems in our lives; Lack of sleep causes a whole host of physical and emotional problems alone. And none of this even takes into account the rate of PND — Post Natal Depression that can go undiagnosed for years and last even longer.

So what do we do?

We should support everyone. Not just the new parents but the seasoned ones too. When someone’s kid doesn’t sleep at night we find ways to support them. Chip in because we’ve been there too, or we’ll be there one day. Or just because we’re human too.

This is how we deal with parenting problems. By looking at each individual one picking them apart to look at the cause, the solution, the support. Every child is different, every parent is different. It is cruel and useless to class all their problems and experiences as parenting.