Snappy was asleep through most of the visit though, because he had the dreaded Hand, Foot and Mouth disease. The fifteen month check up is all about observing him. All Carol really observed him do for the first half of the visit was sleep. He’d only had about an hours sleep the night before so we were all pretty wiped. I was still wearing my pyjamas.

Though it’s not the first time.

Snappy is pretty much meeting his milestones. He’s growing, he’s able to feed himself and hold a spoon. He can hold a crayon though he’s not big on drawing (at least not on card). and he likes to stack things, knock them over and stack them up again. He very much likes to put things in other things. Like blocks or bits of toast into my tea…

He’s actually very dextrous, always has been. When it comes to holding and using smaller items and finer motor-coordination he’s been way ahead for some time. Bigger movements like crawling and walking came a little slower to him. He’s been able to feed himself for some time and every day he does so he makes less mess.

He did until he started using a dinosaur instead of cutlery at least.

He’s started clapping and waving too. Though he usually waves about a minute after a person has left but he’s working on it. He also incorporates waving into his dancing.

While he wasn’t walking in August like his cousins, he is running now. Well, toddling at speed. He doesn’t bother with his walker anymore, doesn’t hold onto anything. He’s off and nothing can stop him except for his own balance and slipping in the water he’s spilt on the laminate flooring.

Or cats. Cats stop him.

He even has shoes now. We weren’t planning on getting any until next year because he didn’t seem to be learning to walk very quickly but he’s surprised us. What else surprised us was having some shoes in the attic. Shoes he knows are his and can put on himself.

Shoes he can put bananas in, forget about, then get upset when he put his shoe on and had mummy scoop out mushed up banana…

He babbles non-stop and has done since he was about eight months old. He also sings to himself a lot, shouts act things (cats, flies, his willy) and had ‘words’ that we understand. However, he used to say more words.At this age, they’re supposed to be saying 2-6 words. When he was twelve months he was copying more words than he says now, and saying, mum. Now he’s not copying but saying a word now and then.

At least, he was on the Monday Carol came to see him. Mostly he said ‘puba’ which is his dolly Peebles and ‘Ble‘ which is Welsh for where. He’s also working towards saying ‘Podge’ too – which is our name for me. However since Carol left he’s started saying the cat’s names again, he can say ‘dwr’ (Welsh for water) and said ‘gentle’ to my wife. Instead of hitting her. Which was a double win.

He’s also saying ‘Be‘, which is short of ‘beth‘ which is Welsh for what.

He’s generally a happy little croc wrapped up in a grumpy toddler.

He’s not as clingy as he used to be, but he still struggles a lot with it. He has started a few things that Carol says is for attention. He bangs his head against things – the wall, the headboard, his highchair – and he’s started hitting us. Both in anger and when he thinks it’s funny. Personally, I don’t think it’s for attention because when we aren’t looking at him he does other things.

The hitting when he’s angry is obvious. Though sometimes I do think he hits us and bangs his head against things because he thinks it’s funny. And he does like a good laugh…apparently.

Basically, he’s already more socially capable than both his mummies.

He sleeps really well. Okay so before he got hand, foot and mouth he slept really well. Went down between half six and seven, slept through the night, wakes up at sevenish. Naps most days if he doesn’t he sits in his cot and talks to himself.

This past week he’s not been so good but we’re trying to get him back into his routine. Right now he wakes up in the night and is a bugger to get back to sleep.

He also suffers from post-nap terrors.

If he doesn’t wake up on his own accord, or even sometimes when he does, he becomes hysterical.

Not just really upset but it’s okay a cuddle will calm him down but screaming, shouting, throwing-up hysterical. He will throw himself around like he’s having a tantrum but with no real purpose. He is inconsolable and there is nothing that can comfort him. Bethend has found the only thing that will calm him down is to put him in his pushchair and take him out for a walk.

Carol wonders how awake he is when he has these episodes and I myself wonder that too. Perhaps the fresh air wakes him up fully. I’ve suffered from night terrors myself a couple of times and terrible nightmares, I can get pretty scared and upset but as an adult and with some comfort I can parcel out the reality from the nightmare.

Must be much harder to do when you’re only fifteen months old and you don’t understand 90% of the world anyway.

This happens twice a week or so. I hadn’t realised how regular it was; but then I’m rarely home for naptime. But they’re not getting better and we have a way to deal with them so Carol isn’t too concerned yet.

It’s scary in the moment though. Especially when he makes himself sick.

My only concern actually (aside from the post-nap terrors) are his teeth. He only has two and they grew a month apart and the second one still hasn’t come all the way through. At fifteen months most kids I meet have a lot more teeth and have had them for a while.

Not Snappy though, my little croc only has the two. Not that he doesn’t make full use of them! Luckily he’s learnt to kiss without trying to take your whole face off or sucking on your chin.

Unfortunately, he’s decided that biting my toes is a brilliant activity. I think he spends too much time with the cats.

However a trip to the dentist is all he needs, even if it’s juts to hear a dentist say that he’s fine. We’ve started teaching him to brush his teeth, mostly he watches bethend brush hers while chewing on a minty toothbrush. He’s only got two teeth though so this is sufficient.

Snappy is small for his age, but consistently so. He’s perfectly on the ninth percentile at every check up for weight and height. As long as he continues to grow as he does, it doesn’t matter that he’s a little croc. His feet are definitely growing!

The thing I’ve found with kids – with having one and being around them – is you never know what’s coming. One day he licked the bus. Another day he fell asleep in my arms like he was four months old again. He can walk around the village but won’t let me change his nappy. He learnt the world dwr and now charges around the house chanting it while holding onto a cup of ‘llaeth’ (milk)

So whatever happens, it happens.

The plan is to start some early potty training and more work with his drawing. To get him back on a decent sleep schedule and to carry on being a happy little croc. That’s all I want. At fifteen months or at fifteen years. 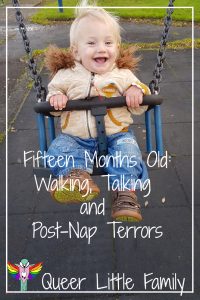 Support our blog – visit our store or be a patron.