Okay, so in the UK we have Harvest celebrations earlier in the year; in fact, we had our church thanksgiving brunch this beginning of this month. I had a migraine though so I couldn’t go. However, my wife is American and we celebrate Thanksgiving in style.

This year is Snappy’s second thanksgiving so I’ve decided to get him a board book to celebrate it. There are a few good ones to choose from so I’m sharing them with you. 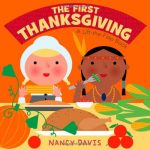 First up is The First Thanksgiving: A Lift-The-Flap Book. I like the lift the flap books in the theory but I know that in reality the flaps get ripped off pretty quickly by tiny hands. This one is bright and colourful and I like the idea of the story – something my son won’t learn in school here. 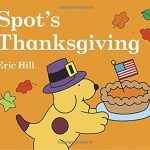 is cute because it’s Spot – who doesn’t love Spot. Snappy doesn’t have any Spot books yet, which is definitely something I have to rectify. Perhaps if not this one, one of the board books in Welsh. Mae Spot yn Cymraeg yw Smot – Spot in Welsh is Smot. 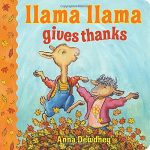 is a book about llamas! Apparently, there is a whole series of them – who knew. This is about a family of llamas celebrating Thanksgiving and I’m tempted to get it just cause of the llamas. The artwork is nice and well…llamas are awesome. 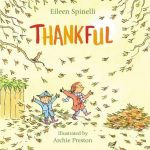 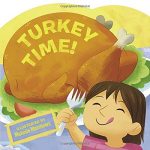 Last is Turkey Time! A delicious board book. We’re big on food here at QLF, though Snappy is mostly all about breakfast over dinner so this might be wasted on him. But it’s colourful and might encourage him to eat his dinner. Or maybe that’s just wishful thinking.

So, those are the Thanksgiving Board Books – there are more of course – but there are the best ones in my opinion and I’m definitely geting Thankful. What about you? If you have any suggestions let me know, or tell me which you would choose. 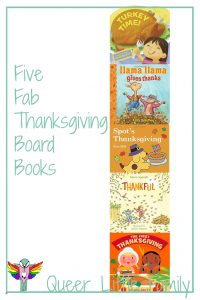 This post contains affiliate links. You can also support us by becoming a patron.