This week my wife finally received her Indefinite Leave To Remain.

Finally, after five years and almost eight weeks since we sent the form in, we are finally safe and settled and forever.

In case you didn’t know bethend is American and came over here on a student visa originally and then when were married in 2012 we started the very long journey to citizenship; something my wife very much wants. We’re not there yet, but this is the next best thing. My wife gets to stay in the country for as long as she likes and never has to become a citizen if she doesn’t want to.

More importantly, my family gets to stay together. 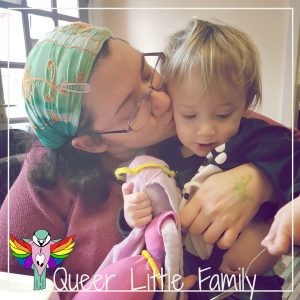 I would never have separated my wife from my son. I would never have taken away her baby away from her, even if he is my baby too. As much as it would break my heart I just don’t think I could ever do that to her. I would rather be alone and heartbroken than her anytime. So if she had to go back to America – even temporarily – I would let her take Snappy with her.

I don’t know what I would do without either of them of course but that isn’t something I have to worry about anymore. And trust me, I worried about it a lot. I would have a brief reprieve for a month when my wife’s visa was granted and then I would start worrying about losing her, losing them, again.

I’ve been worrying about it for five years now.

Five Years And Over Five Grand 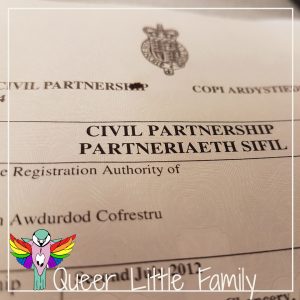 You have to be married for five years before your spouse can even apply for leave to remain. And those five years have to be on a spousal visa. Any years before that on student visas don’t count, which sucked because bethend has actually been in the country for eight years but some of that was on a student visa. When those ran out, we applied for our first spousal visa. Which was a fifty-page form, cost about two grand and caused so much anxiety. We had only been married a couple of months and the idea of losing bethend caused us both a lot of slee

That visa was granted and lasted two and a half years. Then we had to do the same thing over again, same form, same fee, with an added £500 NHS fee. Which we had to pay whether bethend wanted to use the NHS or not. That was granted and then at the end of last year, we started to get everything together for the Leave To Remain form and the Life In The UK Tes

Which by the way is the same bloody form but with a different code on it? Same amount of money. No NHS charge this time. This one was the big one, this form meant that we would never have to worry about being split up again and the last six weeks have been awful.

We didn’t think we’d get an answer so soon; I was sure we’d be well into April before we heard. And I was sure, I was sure it would be fine because my wife is a white Christian woman from an English speaking nation, a mum of a UK citizen and a good person (seriously she is good all the way down to her core which is just rainbows and sunshine). I don’t say that because I’m racist by the way, I say this because I know the government is racist and definitely screens for Muslims, non-English speakers, non-whites more ruthlessly than they would. This is privilege at work, 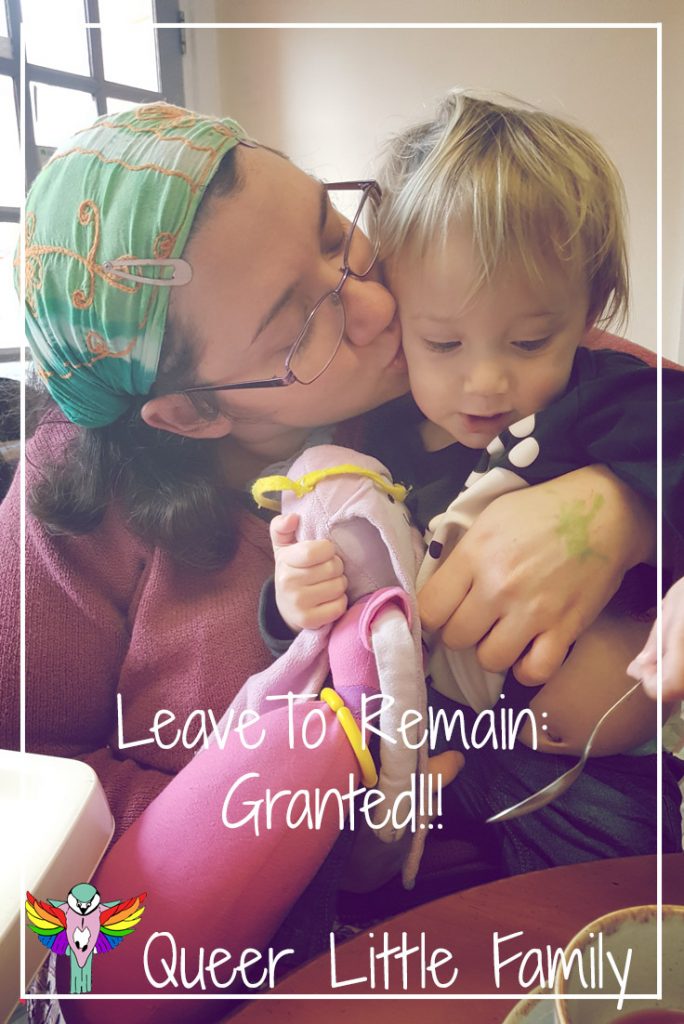 I will admit that even though I was sure it would be fine, I was still worried. Was worried she might have to leave the country for a bit while they made their decision. Worried they would have to go back to New Jersey. I was worried I would have to move to the US just to be with them and start the process all over again with an even more racist and homophobic government. And no free healthcare.

But no, I don’t need to worry about that anymore. No Ireland, no US, no worries (well, not none). Just the three of us together as a family. The relief is overwhelming. I hugged everyone at work, nearly knocked Wyn over in doing so. I spent the rest of the day going; “Hey, babe, guess what?” and bethend answering, “I know.”

Snappy has no idea what’s going on, and one day we’re going to have to tell him about this. We’ve managed to keep most of the stress from him; I think I snapped once when I was filling the form in but other than that he’s only seen our elation at getting that letter.

And now we can try for a second child without worrying about four of us being split up. Or how we would divide five cats between two people…

Leave a Reply to The Mummy Bubble Cancel reply