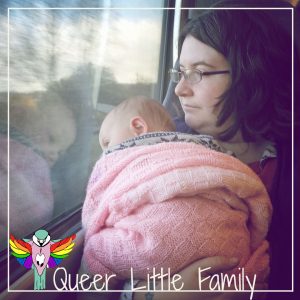 Okay, actually, I think, depending on who you ask – and what scale they use – I am obese. Not morbidly so, I have a bit of height on me so it evens out but there’s enough weight on me to got past overweight in most scales and into obese.

I’m neither shy about it (not that I can be in real life) nor ashamed of it. I’m actually quite healthy, physically speaking. I used to get ill a lot but that was solved by changing my diet – not going on a diet, but just eating less crap and more vegetables. And I haven’t lost a load of weight,  but my immune system better. Other than that, I’m healthy. No diabetes, no blood pressure issues, no joint problems – all things I may develop when I’m older due to family history as much as my sister may. My sister who’s well inside her ideal weight.

My weight is so far down on my list of things I think about that I have household appliances that cause me more grief. Carpets. My lawn. The weather.

So I do wish people would stop treating me like a fat person. And I don’t mean calling me nasty names and throwing biscuits at me in the street (actually happened). Or making me the butt of all food-related jokes (also happens a lot).

I mean being nice to me.

I mean compliments about losing weight or being fitter.

It seems to be perfectly reasonable to compliment me on my weight. My family, my friends, people I sort of know cause I serve them all the time at work. People I consider strangers but are pretty sure they know me and haven’t you lost weight since the last time I saw you…

Maybe, maybe not, I don’t know, I’m not checking. My clothes all still fit so it can’t be as much as you think it is but it’s not really important because my immune system is better and my stamina is greatly improved and I don’t need to nap in the afternoons and I deal with my depression better, and my anxiety is better. those are important.

My ability to lose and regain weight is actually not in my control. So congratulating me on it, commentating on it, or just noticing it, is a bit pointless. Cause I sure haven’t noticed (clothes still fit and the epic podge of win remains) and I have all this other shit that has changed that’s really made an impact on my life.

My stamina is so much better. Two years ago I was getting up around midday and napping around four am. And sleeping all night. Now I can work roughly around 30 hours a week in a physical job (I do a lot of running around in that shop).

I haven’t self-harmed for a year. I haven’t done so for any real length of time for even longer.

I’m coming off my medication. 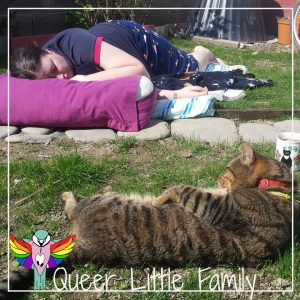 I have a job. My first proper job since 2008. Think about that for a moment. 2008. I started this job last September. That’s six years between jobs.

I got married – okay, this one is a little harder to explain. I have been anti-social pretty much for as long as I can remember. There have only ever been a few people I have wanted to spend time with, and even then it’s been a struggle to do that. On top of that, while it might not seem like it considering I write this blog and what I write on this blog, I’m actually quite private about certain things in my life. The web affords me some anonymity that I don’t get or feel in real life and I can be very private about my some very specific things. Which meant I didn’t like having people in my house for the longest time. In fact, when I moved back to Wales, the only people I allowed in my were my mum and Jay, my sister and nephew, and my niece. No one else. For the first time ever I had my own space with my own rules and I was able to keep people out of it and I had never felt better about it.

It wasn’t until I met Kate Ellen that I let anyone else in. And now I’m back to letting lots of people in my house but unlike when I lived in Leicester, now it doesn’t make feel panicked, or a sense of dread, of sick.

I’ve had poetry published in magazines. I’ve written short stories and thousands of words on this blog that’s been going in this incarnation since 2007.

I love my niece and nephew as if they were my own children and I do good things.

It’s hard to put that on a badge though. And so I have the visual. And the visual is a variation in my weight which may or may not be up or down, given any time of the month, year, or just how much money we have for food and desserts.

There’s not actually a lot I can do to change this though. I can’t change the way society views fat people. Hell if I lost a shit ton of weight, it would be worse. And if I were thin, there would be other problems (as my sister can attest too). I can, and do, deal with it. In that, I ignore the comments and compliments, and most of the time I don’t care about this stuff. Like I don’t care about my weight.

Sometimes though, it gets too me, bugs me enough to lie awake and grumble to my wife about it (who only cares about my weight in the same way I do. Less than I do actually), and sometimes it bugs me enough to write almost a thousand words on the subject.

I’m in the Halloween edition of Glitterwolf – next time you see me and think my weight has changed, tell me well done for that instead – cause poetry is much more important to me than any perceived change in my weight.