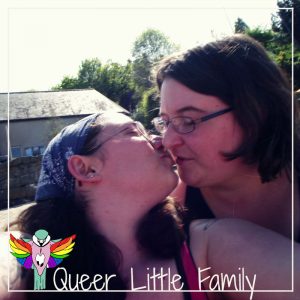 On July 2nd my wife and I will be celebrating our sixth anniversary. Seeing as I’ve only been blogging on QLF for two years, I guess I’ve never spoken about our meeting, our engagement or our wedding. I don’t talk about our relationship much, it’s not really different from anyone else’s relationship. We drink a lot of tea and have our serious talks mostly at night in bed. Although we were raised very differently we have a lot in common. We both wanted kids and both never thought we’d ever get married let alone have Snappy.

So strap in for a longish recap of those first nine months (that’s right, nine months).

The Meeting And Mickey

We met in the Varsity in Aberystwyth. To be honest, it’s amazing we ever met. I have social phobias, we both have anxiety and bethend doesn’t drink. But my friend had organised a gay night at the Varsity and I wanted to support him (and two other friends who were going), so I went. Bethend also went to support a friend of hers.

It was a good night, we talked a lot, I was slightly drunk and covered in rainbows by the time I walked her to her friends flat which happened to be a few rows over from mine.

For clarity’s sake, our friends are all still single.

Anyway, I texted her the next day, we started spending time together. After about two weeks we found this cat.

We were on our way from her flat to mine before a bonfire night; we had cardboard to burn (which I was wearing as wings) and a bag of her clothes so she could stay over at mine, and her bike. And we saw this cat on our way and noticed it was pretty thin and having trouble standing up. His back legs couldn’t support him, he was filthy, inside and out and severely malnourished. So we dumped the cardboard, stuffed this rotten cat in a drawstring bag and took him tot he vets. We waited for an hour for an emergency vet that never showed up and in the end, took the cat back to mine.

He stayed. We called him Mickey and because bethend wasn’t allowed cats I kept him. I wasn’t allowed cats either but I didn’t care. We cleaned him up, got him checked by the vet, fed him up and he became the King of Cats. I’d never had a cat so bethend gave me a lot of advice on how to look after it (and spent a lot of her time at my flat looking after him too).

Bethend says she knew she loved me that Saturday afternoon, sitting on the steps in the cold waiting for the vet, even though I didn’t like cats.

He lived for another year but eventually died of organ failure not long after his ninth birthday. I still miss him.

The Engagement And That Restuarant That Had Opened The Same Day

By Valentines Day bethend had a key to my flat and we had told each other we loved her. We also had a conversation about moving too fast but then by April bethend had moved into my flat. We also had a frog by then, as well as Mickey and two hamsters.

In April I was toying with the idea that I wanted to marry bethend but was still really worried a lot about going too fast. My last long-term relationship had progressed quickly and that ended up badly (another post for another day). Bethend was already planning to on asking me, however, even going so far as to ask the most important man in my life his opinion on the matter.

He said it was gross but didn’t mind.  it was mushy stuff and he didn’t really want to talk about.

So, on a nice sunny day in April, we went for a walk around Aberystwyth, and bethend convinced me to walk up Consti. We got halfway and I wanted a break; cause goddam that’s a big hill and I am fat, not fit. She popped the question there and then, halfway up the hill.

Got down on one knee and everything.

I didn’t think she was serious, asked her really? Said yes.

We celebrated by having dinner in a restaurant that had just opened up. It used to be the Orangy, but that had closed down a couple of months before. While we were walking down the prom afterwards a woman gave us a menu and we decided to try it out. We were their first customers. Ever.

We were also their only customers while we were there.

Despite this, it took ages to get served, they forgot our drinks and got our meals wrong.

This new restaurant did not last long.

Getting Married In July And Planning A Wedding In Two Months.

I advise anyone who is getting married to plan it get married in less than three months. Seriously, it’s no more or less stressful but there is less time for things to go wrong, less time to worry about stuff and everything is done and dusted. This was not long after civil partnerships were introduced in this country, and before we could even call ourselves married legally (something we still haven’t done yet).

We got married in July because bethend’s parents were already coming to visit her in July. Adding on her maternal grandparents and her brother onto the flight was easy enough and it wasn’t a big wedding. We got married at the Conrah and were the first civil partnership to be married there and by our registrar.

We made the invitations ourselves, bought some blank cards and designed and made them one afternoon sitting in our friends flat. Managed to get the bridesmaid dresses off of eBay (mostly worked with some last minute alterations), my mum drove me and Kate Ellen to a town in the middle of nowhere to get wedding dresses.

We Didn’t Get A Bouncy Castle: The Actual Wedding

I was so nervous I thought I was going pass out. 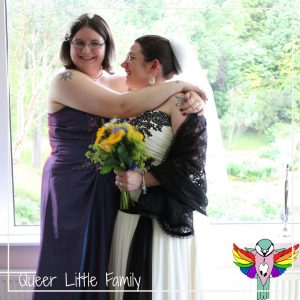 For someone with anxiety and social phobia, walking up the aisle and sitting in front of twenty people was not my idea of fun. I managed it mostly by holding bethend’s hand and not looking at all the people looking at me.

Our nephew was my best man, my wife insisted that this meant he needed a sword. He had the rings and got them mixed up, plus we realised we hadn’t taken the tags off them as we’d only managed to pick them up from Argos the day before as they’d screwed our order up. My sister and two of our friends were bridesmaids.

Our niece was a flower girl and carpet bombed the room with the petals. During the ceremony, she kept mooing at the sheep in the field and my stepparent had to keep telling her they weren’t cows. Then later while we were signing the certificates she and her friend Honey started pulling apart the flower displays in the window and generally caused chaos.

My friend Sean did our wedding photos as a present. Poppy, our niece was upset because she had to leave the dance floor when we had our first dance. My nephew danced himself sick. We had jelly and ice cream for dessert.

My cousins went to get “petrol” and came back and started drinking cans of lager our the back of my cousin’s car in the hotel car park. They got very drunk and took my brother in law back to my sisters with them where they were staying. the men slept in a man pile in my sisters living room. Someone shaved off Rich’s eyebrows, they left my brother in law a couple of miles out of town with no clue where his hotel was other than it was on the seafront.

A lot happened. I don’t remember everything. We cried at various times for various reasons. We changed out of dresses after a while cause it was more comfortable. My nephew made a speech, just saying he was really happy. Then he burst into tears. We ordered a bouncy castle for the wedding. In the end, it rained and it wasn’t safe to put it up. Eventually, we will have that bouncy castle. Not for this anniversary but one in the future. 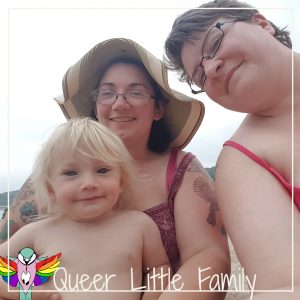 We married not long after civil partnerships were introduced and before we were able to have a legal marriage. We think about converting if from time to time but it doesn’t make a whole lot of difference to us. Not legally and not emotionally. This has been a marriage from the start and nothing really changes that.

And not a lot between us has changed since then either. Oh, our lives are different, in equal parts harder and easier. We have Indefinite Leave To Remain for my wife and a toddler. We have toddler troubles and mental health problems but the core of our relationship is the same.

I love my wife, and she loves me and that alone shows me that no one is incapable of being loved, no one is unworthy of love.

So here’s to another six years, another sixty years. Maybe with more kids and fewer cats (but probably not fewer cats).