Snappy’s first Christmas was wonderful. As I’ve already spoken about how Christmas is a weird time for me, but this year it was great. 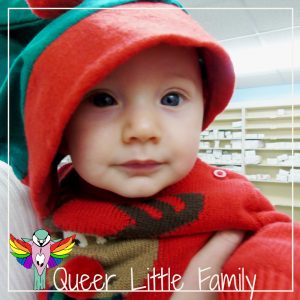 On Christmas eve I had to work, but only for three hours. And considering how hard I’d worked during that week (so stupidly had), I kinda slowed down a bit. Did some work, ate some biscuits, did some work, drank some tea. My boss was the pharmacist on duty that day so she didn’t mind so much. She knows how hard I work the rest of the time.

My sister picked me up and we sang loudly to the Offspring on the way to the village pub cause that’s what we do. We had lunch with my mum, the kids, and my best friend Melanie who arrived the evening before from York (which is like six hours away at least). It was lovely, Snappy was well behaved, my niece got hold of my mum’s camera again and took a lot of photos which I’ve yet to see. 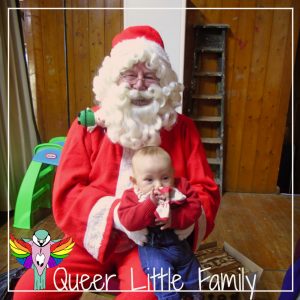 Christmas day we got up and opened a few presents. The change in routine and a new person in the house, as much as he loves his auntie Melanie, meant Snappy wasn’t sleeping well. So we did present unwrapping with him in three bits. Mostly he wanted to chew on the wrapping paper. He got a few books, some toys, some clothes. Lots of Christmas related stuff. Everyone was really generous. My aunt got him an ornament that flashes/gives people seizures.

We took the dog for a Christmas walk and opened some more presents with Snappy. We had dinner while he napped. Bethend and Mel made dinner together, I put the baby to sleep and watched TV. Dinner was great and I washed up. I don’t cook but I can wash with the best of them.

Boxing Day And Beyond 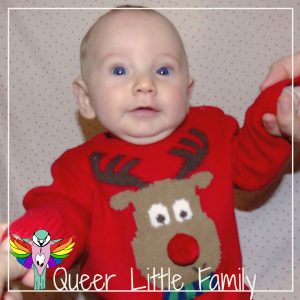 On Boxing Day we strapped Snappy to my back in the sling and took a walk up to Castell Bach, a hill fort behind my house. He wasn’t too hard to carry on my back, though by time we got home my ankle was hurting a bit. The day after bethend and Mel took a walk on the coast path but with my ankle and Snappy’s fever, we stayed home and did housework and played some games. Had a nap.

It was the best Christmas I’ve had in years. Since I moved back to Wales and spent that first Christmas with my mum. Or the year I spent with my sister and the kids and my first year with bethend a couple of years later. I’m looking forward to next year already in a way, to continue with the traditions we’ve started this year as a family, to get Mel back again, to see Snappy really get into it and no just chew wrapping paper. To start new traditions.

This was just a little post in between the holidays, I hope you all had good Christmases and are looking forward to the New Year. We’ve got lots coming up and soon, weaning, moving into our own room and sleeping into a cot. Getting a passport. Turning six months.