April has been full of gardening whenever the sun shined long enough, trying to stay dry and more teeth grown. It’s been another odd month at QLF.

We gave up on Bones in season ten. It’s was getting boring and a bit more bonkers than we liked. So now we’re watching The Great British Bake Off Again because well, Mel and Sue and bread and cakes. We’re up to date with RuPaul’s Drag Race, I watch Annihilation which was a great film and genuinely scary. Snappy is watching Mr Men cartoons from the seventies and eighties and train videos on YouTube.

I’m reading the Dead Sea Deception. It’s okay, I like conspiracies and history so we’ll see how it goes. Snappy and I are still working our way through the Mr. Men books. We’re actually on the Little Miss books now. Bethend has read Food Of The Gods, Soldier of Arete, Ghost of Monsieur Scarron and probably a couple of others she can’t remember.

I’ve written twelve poems this month as part of NaPoWriMo. Not as much as I would like but I don’t mind. I posted them on my Medium blog and the last one was Cherry Blossoms. I’ve also written a couple of guest posts that I’m trying to find homes for. 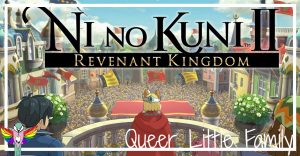 I blasted my way through Ni No Kuni II. I loved it. I played over sixty hours of, finished it and am now just pottering about just trying to get 100%. I also played Rollercoaster Tycoon (the original) this month cause I had a craving and I also started playing PVZ: Garden Warfare 2. Bethend is playing Minecraft and Kingdom.

For Bethend’s birthday, we went to the NY Met’s broadcast of Cendrillion. We’ve seen it before and we have the 2009 show in DVD. This was so much better. They’ve played around with the choreography a little and it was so much funnier this time. Plus Alice Coote who plays Prince Charming was much better and Joyce Di Dinato can do no wrong. 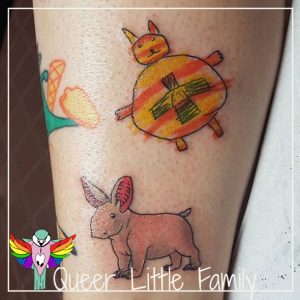 Bethend and I both got tattoos this month. She added to her Big Fat Cat tattoo and I added to my animal leg. We get our tattoos done by Alex at Monster Ink who is excellent and booked up months in advance. We also managed to get Bethend’s arbour up over the door, Snappy got her a comic book for her birthday. I’ve been going to my LGBTQ writing workshop and the last session was this week. But we’re creating our own writing group which is awesome.

Hopefully, May will bring warmer weather cause it’s a busy month.