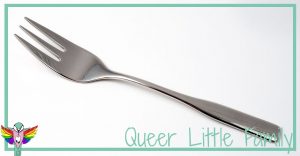 Something I can’t really explain is my aversion to using weird looking forks. It’s definitely an OCD thing. I have a lot of weird looking forks too so we’re at the point now where my wife will actually ask me if the fork is acceptable. At one point she wanted me to paint a dot on each acceptable fork.

I’m pretty sure she still wants me to do that.

I have a lot of tridents.

I don’t even know where they came from but they are not forks. It’s like giving Neptune a damn fork and saying it’s a trident. It’s not. One is not the other. So I am not eating my dinner with a damn trident that’s for sure.

Some of the other forks are just funny looking. Long prongs, or weird shaped handles – I’m not middle class – none of my cutlery matches (my plates match some bowls because I bought a set a charity shop). Most of it two people’s collections of forks cobbled together from bits and pieces bought over the years from a second hand store in town called Craft and charity shops.

I do have usable forks. Thank fully, else I’d be eating with my hands all the time or just putting my face directly in my food like the cats. They don’t have a pattern, they have nice straight handles and four normal straight prongs and I am very aware that using the words normal and straight is kinda ironic for a weird bisexual but still. I like normal straight forks. 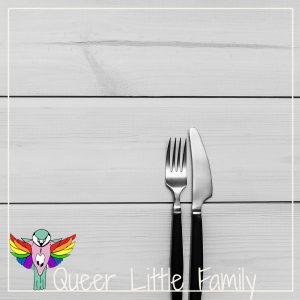 Knives are pretty easy. They’re just long straight pieces of metal with a little curve. There isn’t a lot of variation and they’re all very boring and easy to use – mentally speaking. Spoons too, though I have some oddly massive spoons – too big for cereal, too small to serve with. I have no idea where they came from either.

I don’t even know when this all started. Some of these things have like switches in my head and one day a switch flicked on in my head and then bam – all forks must be normal and not weird.

Maybe one day it will switch off again.

Until then, I’d best get some paint so I can mark my forks…