I am not female.

Gender fluid is a gender identity which refers to a gender which varies over time. A gender fluid person may at any time identify as male, female, neutrois, or any other non-binary identity, or some combination of identities. 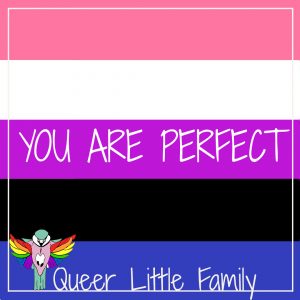 It’s not a new thing – more than anything it’s about finding the right word, the right label to use is a new thing I guess. I couple of months ago I decided that was what I was going to use to explain a lifetime of gender issues. It didn’t solve any problems overnight but there is some satisfaction and some peace in having a label. I like labels, there is clarity in labels. It’s an off cast of the BPD I think, of not knowing who you are for so long means that having some direction, some words, brings me some comfort.

I will probably always present as female – not feminine, but certainly obviously not male either. It’s probably the hair – it’s always been a pain in the ass and the hairdressers makes me too anxious to actually get it cut really short (honest). Oh and the boobs. I mean, I’m a b cup, and depending what I’m wearing they show. Though I find my uniform flattens me out a bit – but it’s a gendered uniform, which I dislike cause I can’t imagine my company letting me wear the male version.

As it is I spend most of my time in the back where no one can see me.

Gender is a funny thing, some people are so sure in it that it never occurs to them that there’s another option. Some people are never sure they are one or the other or another. I’m 33 and I’ve never really felt one or the other. And it’s always been that way, it would be easy to blame my childhood or my mental health but no six-year-old cuts their own hair in the middle of the night cause of borderline personality disorder. When I was a kid I wanted to be a boy so badly some days. I told people I wanted to be a boy so I could play professional football, but it always felt deeper than that.

For while I was calling the change into the male gender ‘boy mode’ mostly signified to the outside world by a lack of makeup and only wearing t-shirts and polo shirts with my jeans. I definitely have a girl mode, a version of me in makeup and vest tops. That’s a very superficial side to it, there’s much more, my way of thinking changes slightly, the way I react.

The way I feel.

I’m still me, always me, just sometimes my gender is not the same as the day before.

This doesn’t change or affect my sexuality either.

This doesn’t really affect anything. It shouldn’t at least. I still have bills to pay and a baby on the way and work to do.

19 Replies to “I Am Genderfluid”