May has been weird, the usual ups and downs. We tend to lead a very two steps forward one step back kinda life. Not on purpose, but things happen, we panic, we deal, more things happen. The weather has been amazing though, and I turned thirty-six and did something pretty amazing. Find out what below.

I’ve not read much this week, mostly it’s been writing. With Snappy we’ve moved on from the Mr Men and Little Miss books. We’ve read a few different things, The Witches Dog and the School Of Spells, The Girl Who Thought She Was A Dog, Some Paddington and started Roald Dahl’s The Magic Finger. Bethend has been reading C.S Lewis’ sci-fi trilogy, In The Heart Of The Sea by Nathanial Phillbrick and The Silent Invaders by Robert Silverberg. I have read Presumed Guilty by Tess Gerritson.

I discovered that Plants Vs. Zombies Garden Warfare 2 gives me segaitis. So other than Pokemon Go, I’ve not played much. Though I am working my way through the God-awful Harry Potter mobile game A Hogwarts Mystery. Seriously it’s shit for playability. I’m half interested in the story though so I seem to be sticking with it. Bethend has been paying Kingdom and The Forest, plus some Minecraft.

We’ve watched which is both hilarious and had way more blackface in it that I remembered. Shame, definitely a product of its time, unfortunately. We also watch Holy Grail this month too. We’re currently working our way through  RuPaul’s Drag Race Season Ten and Father Ted – cause we love Father Ted. Snappy is mostly watching Bagpuss and The Music Man on repeat.

For my birthday we had lunch in town on our own free of Goobers. Snappy has stayed with his aunt, my aunt and spent the afternoon with his nanna for the first time too. He confused her a lot cause he speaks more Welsh than she does. And she cleaned moved some pots around, cleaned up my fruit and put his nappy on backwards. All in all, not bad seeing as it’s been a while since she looked after a toddler.

I’ve written a few poems this month and started a couple of stories. I’ve written a couple of guest blog posts to be posted in June. We had the first meeting of our new LGBTQ writing group – Write It Out – that we set up after the initial six-week workshop that was put together by writer Helen Sandler and culminated in a reading. In which I read a story out in front of eighty people at Aberration On The Red Carpet. It was pretty amazing and I was nervous, but I did it. 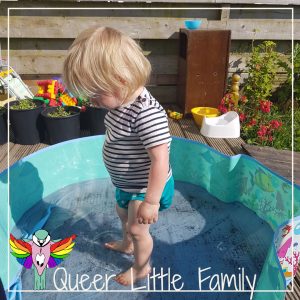 Lots of little bits about May: I’ve made some new friends through the writing group, Nanna got Snappy a paddling pool. We’re still looking for a sperm donor, I’ve had two job interviews and have another one pending. It was my birthday. Snappy has more teeth coming and is starting to want to sleep in his bed over his cot. And we have chicks! Five chicks. Four we have to hand rear and one is still with mummy chicken. More on that later!

One Reply to “May’s Entertainment”