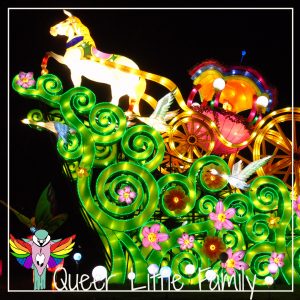 I decided that instead of buying Snappy a lot of stuff he doesn’t need I would take him on a trip for each Christmas year.

So on Sunday, we went for our first family trip ever.  We stayed overnight in Birmingham at a Premier Inn (I rarely stay anywhere else) a long train ride from our home but still the closest and easiest city to get to. It’s about three and a half hours, longer with a change and Snappy liked watching the world go by for most of it; only really getting fussy at the end of the journey.

On Sunday evening, after a late lunch/early dinner we headed off to the Magical Lantern Festival at Birmingham Botanical Gardens. I chose it because I knew Snappy would react well to the colours and lights. I knew we would enjoy it too but I didn’t realise just how much we would like it. We got about twenty minutes in and Snappy was chatting away happily and I just started to cry. I’m still struggling to adapt to this new level of happiness but that’s another post I think.

It was all just so beautiful. Some of the designs were really quite detailed, and absolutely huge. The animals were gorgeous, and the entire place was just perfect. It took us about an hour and a quarter to get round it. They set it out in a route you followed, and it was very busy, but you could see why. there were food stalls at the entrance and dotted about but we’d just eaten so we didn’t have anything. We just walked around staring at everything, taking pictures and watching Snappy being mesmerised by it all. 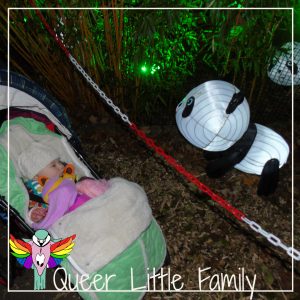 My favourite were the birds I think. Both the caged ones and the ones at the beginning. I think the gardens must be great to visit in the summer. That had lanterns of some of the birds that are actually housed at the gardens including a huge cockatoo.

Snappy definitely enjoyed it. It was freezing cold and he hadn’t eaten for a while but didn’t really fuss until much later in the evening when he was too tired and too wired to sleep. I popped in him in his pushchair and he fell asleep in a couple of minutes. Once he was in his basket he slept all night. I’m glad we took it, I think sleeping in a cot for the first time in a strange room after such a busy day would’ve been too much.

The next day our train didn’t leave until half four that afternoon so we had some time to do something else and my mum and step dad had given us some ‘spends’ so I decided to take Snaps to the Sea Life Centre. It was pretty good value and we could come and go as we pleased. I cried because I was happy again and there were penguins. I love penguins and I think Snappy does too, he kept trying to touch them as they swam up to the glass. One of them kept trying to peck at my wife’s skirt as it sat against the glass. 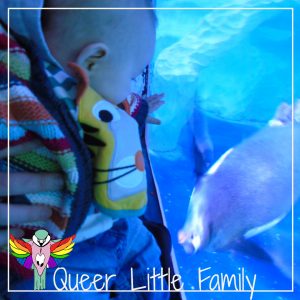 We walked around a bit, looking around at the fish. I love aquariums. There were eels, we love eels, they always look like they’re laughing and cracking jokes. Eel jokes granted but jokes all the same. We needed to feed Snappy half way around and we left to go to a cafe and feed him. When we went back he fell asleep – his usual nap time – and we finished off the sea life centre, going through their tunnel and discovering our new favourite. The Bowmouth Guitarfish. It is huge and wonderful. they also have a turtle there called Molokai that was at least forty years old.

We finished the centre and found somewhere for lunch. Snappy woke up and we decided to go through again because I really wanted him to see the fish in the tunnel. We had the time and he was as mesmerised by the fish as he had been in front of the tanks at the pet shop. He made some great faces and was really happy. It was worth every penny, every second.

I’ll write longer reviews about both things at a later date.

After the Sealife Centre we walked to the train station, through the Christmas markets. We bought an ornament for our tree (that’s actually on his pushchair right now), and checked out the changes to the city. It’s been a long time since I went anywhere in Brum beyond New Street Station. 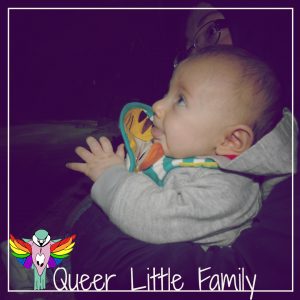 The journey home was a little harder. Snappy was okay, but got a little worked up. I put him to sleep in his pushchair, the sort of feel asleep against the wall of the chair, my legs wrapped around the pushchair to hold it in place (even though the brakes were on). We got the bus home, got in, had dinner and went to bed.

It’s Friday, I still feel like I’m trying to catch up a little (hence the late post). Snappy is find though, I know he won’t remember any of the trip when he’s older but I have to many photos and we’ll remember it. It’s also the start of a new tradition for our family.

I definitely recommend you check out the lantern festival. I can’t wait for our next trip either! 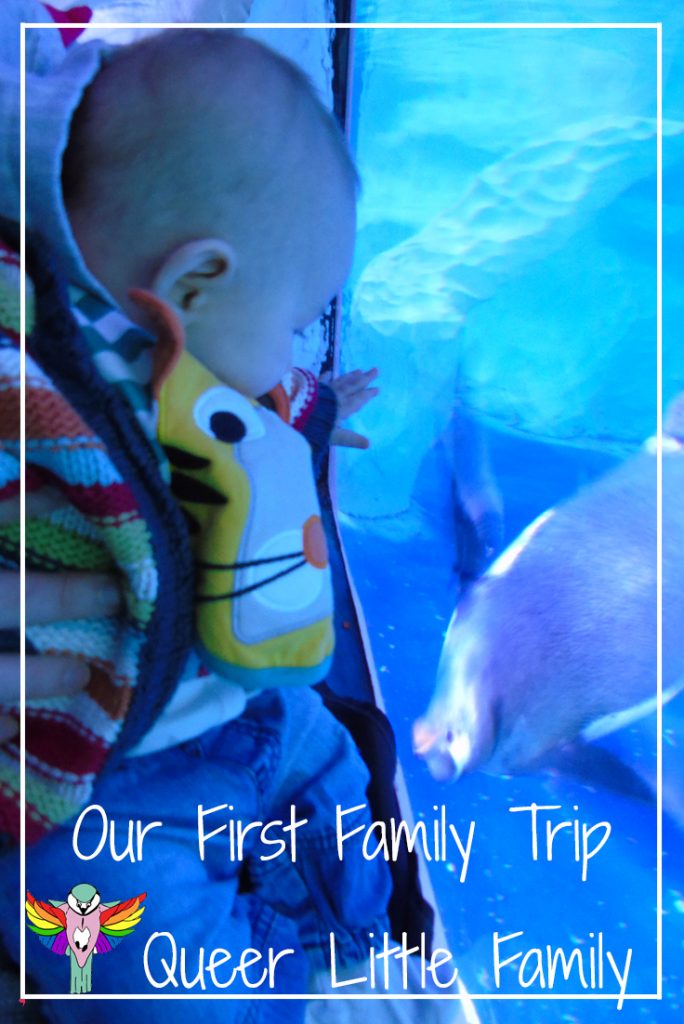 4 Replies to “Our First Family Trip”