Snappy is now just under a month old.

Last week was pretty bad so I didn’t blog on either of my blogs but that wasn’t really down to having this tiny newborn. I started back at work, a friend killed themselves, my ankle was really bad after my CAT scan…Thursday was a really bad day all round. So I took a week off from the online world I have created for myself to concentrate on this real-life world I’ve created.

It needed doing as these things do.

So a little update.

My son is pretty awesome. He has a small fan club consisting of my work colleagues, family and neighbours. He also has the indifference of some cats. Which I think is the best he can hope for. The best any of us can hope for. Pogo is terrified of the nappies, and little Stink is really jealous but he’s already really jealous. Merry doesn’t care, Reb just nudges him aside to get fuss. So they’re much the same as always.

We’ve been taking shifts sitting up with Snappy. He has good nights when he’s sleep for six hours, of feed, sleep and feed again. He has bad nights where he won’t sleep or settle unless being held. We’re sort of working it so that I can get enough sleep to go to work and my wife can get enough sleep to function in the day as well as a nap. I need plenty of sleep, in my profession lapses in concentration and mistakes can have some serious consequences. Luckily I don’t do final checks, but still, I need to be careful and concentrate.

We’re managing. For these few weeks and months, I think that’s will be the way it goes. we manage and he will continue to grow and develop and that’s perfectly fine.

He’s starting to get more control of his head, learning to lift it up. I like watching him in his bouncy chair or basket kicking his legs out and flailing and generally learning to figure out his own body and the world around him. He makes some great faces too and some wonderful impressions of various dinosaurs. Especially when he’s feeding. 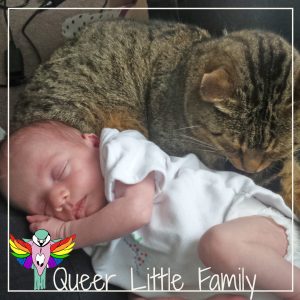 He’s feeding well and last time he was weighed he was 6lb 8oz. So he put on an ounce a day. If he continues like that he should be 7lb 8oz when the health visitor comes next. The health visitor Carol is lovely and has been doing this for twenty years, there are very few babies in the area she doesn’t know. She was the health visitor for both my sister’s kids and my neighbours. She seems really easy to talk to and get along with, so hopefully, it’ll easy to get advice when we need it.

He looks like my wife, like everyone in her family. There is some very strong genetics in that family. He had her nose and her brother’s ears. His eyes are blue and may remain so like his grandfather.

Anyway, that’s him and us, nearly four weeks in.

I’ve always considered my wife and me to be family, a family. It’s nice to have an addition to that family, to have grown it a little.