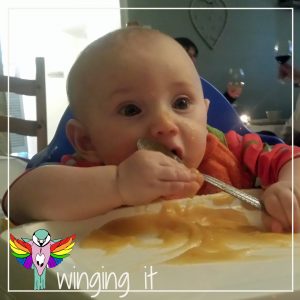 Since we started weaning Snappy we’ve been letting him try…well…everything.

Cheese, yogurt, tea, every fruit and vegetable in the house. Crackers. Rusks. He will eat pretty much anything we give him. He will pretty much eat anything he can get his hands on. Which is fine, but he doesn’t want to be fed. He wants to do it himself though. He’s a stubborn little croc. That’s okay, we’re working with it.

For Valentines day we went out to dinner at a cafe some people we know have recently taken over – they were happy for us to bring Snappy too; they have kids, one is only about eight months old than our bab. We weren’t quite ready to leave him with babysitters yet so we all had dinner together.

Normally he’s asleep when we have dinner, and if he sees us eating he gets really wound up if we don’t let him have some. Which would be fine if we only ate baby appropriate food but humans cannot live on mush alone. The texture alone…ugh. Anyway. So we bought him some fruit cocktail pots that were reduced, and let him eat one. By eat what I actually mean is spill it is all over the tray of the high chair, get some on the floor, get it in his hair, aaaaaaaaaaaaaaaaall over his face.

Get some on me.

He did eat some of it though. I fed him some, he does manage to get stuff in his mouth when he chews on the spoon. We all enjoyed our dinner and we had a lot of fun. Plus we tested our theory that Snappy may be a leftie. We went home and went to bed and everything was fine.

Around midnight he started crying. Bethend tried feeding him, I tried changing him. We tried rocking and singing. He just started screaming. We tried teething gel and paracetamol. He was inconsolable. He didn’t have a temperature, didn’t have any marks or a rash (the last time he was this upset he had bum rash).

We didn’t know what to do.

So we got the pushchair and pushed him back and forth in that. It’s a got one of those muffs in it and he finds it very comforting, though he didn’t settle right away. He did settle though, and as soon as it started it was over.

The next day he was fine. 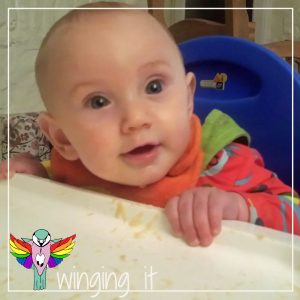 The only new thing he’d had was the fruit cocktail which was 56% apple. And the last time he had apple slices he reacted baldy to that too. He gets pretty inconsolable whenever he gets wind or a bad stomach. It has to be the apple. He was fine once it passed through his system.

So apples are on the no-go list for a little while.

It was a little scary. I think if he’d had a temperature I would’ve freaked out I think. As it was I just wanted him to stop crying long enough to think straight. Hysterical six months old in the middle of the night are not easy fare. Plus usually once he stops he’s done, he’s not one to drag it anything out. He cries or he doesn’t. No in between.

The no-go list is short. Apple and red pepper (we all reacted badly to this seasons lot of red peppers) but so far so good. Bethend has been developing a few food allergies herself lately – random ones like the ‘smoke’ flavouring in shop BBQ sauces, and the biscuit sticks from a Nutella and Go snack pot. We’re not sure what started them off but we work with it. It’s not like we eat any shop sauces anyway and well, I’ll skip the snack pots and go straight for the Nutella from now on.

Hopefully Snappy might grow out of the apple intolerance. Or he might not. He’s still so little and there’s still a lot of food for him to try.