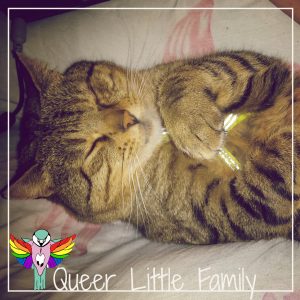 I finally felt the baby kick.

We’re six months in, so my wife has been feeling Snappy moving around for a little while now: when she eats, when she’s trying to get comfortable, when the cats are purring…but not when I’m feeling it. They stopped moving entirely whenever I put my hand on her belly, like the awkward little crocodile that he is.

Then I finally felt him kick. Not hard, just a light ripple of sensation through my wife. I didn’t quite believe it at first cause I’d been trying so long to feel him and definitely too early, but it was the baby and I’ve felt it since a few times now.

It was not the momentous occasion I expected it to be in some ways. Not that it wasn’t amazing but it wasn’t a huge thing that had me crying or shouting in excitement. Television has ruined me in some ways. What it is though is a constant affirmation of my baby’s existence, my baby’s life. It’s a deep satisfaction at the very core of my being that makes every day I feel him just a little bit better. A little easier.

I can hear him too, not his actual movements but I can hear the amniotic fluid around him move and pop. This is cool too but doesn’t have such an effect on me emotionally. I think that’s because I’m more of a tactile person than I am an auditory one.

It all feels very real when I feel him kick. Even more, so that my wife’s expanding body or the scans, feeling him kick is more real than anything. Not that he hasn’t been real, though for a long time I was in a state of disbelief that we’d actually managed this. We’d already had a few setbacks before we even go a regular donor, so for it to work on the second time with this guy was pretty awesome.

Life is going to be very different very soon and very quickly.

I can’t wait. Save

🛁 Post bath hair 😍 Bath with her mum and b

🌈 Back to the park. And back to church. Today

I'm tired and feel like I've been mentally put thr

💜 I don't even know how to describe how lucky I

👕 AD:Gifted You know how I like to make a poin

🍽️ This is a hotdog crumpetwich. Hotdogs be