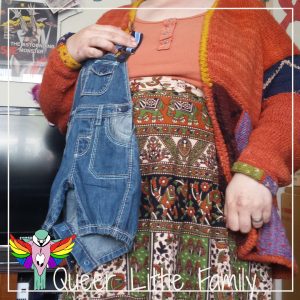 We’re six months in now, on week twenty-six and very soon it’ll be August and we’ll have a baby.

It feels like bethend has been pregnant forever but not really that long all in one go. We were trying to figure out what would be causing some health problems that started at the beginning of the year. It didn’t even occur to me it could be the pregnancy because I’d forgotten exactly how long she’s been pregnant. I doubt bethend has; my niece asked her how many years until the baby was born and she wasn’t thrilled with the prospect of being pregnant for years…

Pregnancy suits her though. My sister noted that too. She looks wonderful pregnant. I mean, I know she’s exhausted and everything hurts sometimes and there are a million other little horrible things, but she looks amazing. Her belly is quite high, or Snappy has pushed everything up so he can move in. She’s managing quite well too, no real horror stories bar from her left breast.

The GP is pretty sure it’s a blocked duct, which is causing a lot of pain. A lot. She’s managing as best she can and doesn’t let the pain slow her down any more than the pregnancy has. She’s not put on any weight – other than the baby itself and the extra bits. She said to the GP, three months and it will all be worth it. His reply was three months and six weeks. Because that’s when the baby first smiles and until then it’s all misery. I love my GP.

We’re not ready. I mean we have three months, and even then, I doubt we’ll be ready. But then, who the hell is – though the nesting instinct has definitely kicked in. I think bethend was born with the nesting instinct though. The baby’s room is almost done, though my border is sort of in limbo and we still don’t have a cot.

These things will come though.

The baby really likes eating, sleeping and showers. Definitely my baby. Bethend has seen him move, and I’ve felt him kick a few times (more about that later). I can hear him moving too, I can hear the amniotic fluid when he moved through it. It’s the most amazing thing. We have another scan this week so we’ll get to see him again, and also a glucose tolerance test so we’ll get to sit around in the hospital a bit.

Just this little update this week to say things are coming along nicely.

12 Replies to “Two Trimesters Down, One Trimester To Go”