I was going go write about how this week we had our midwife come over and do our birth plan and how it was all a bit hilarious because we have cats and very useful because she is lovely. I still will tell you about that and how I spent most of today in the hospital with my wife strapped to a monitor. That I’ve never been so scared in my life without even knowing about it first. 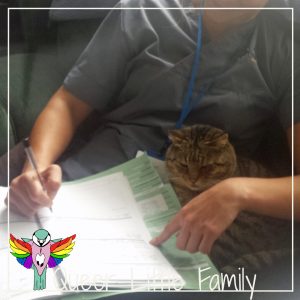 On Tuesday the midwife who is actually in charge of our care came over. Her name is Amy and we’d never actually met before even though we’ve spoken on the phone before. She was supposed to do our intake appointment. I’m glad we did get a chance to finally meet her.

We made her a cup of tea and she settled on the sofa with our notes and almost immediately our cat Reb Brown sat down next to her. He was sitting in his spot, but I’m usually the sitting next to him, not a midwife. He doesn’t care who he gets his affection and attention from. He’s 5.5KG of cat, you fuss him or his headbutts will convince you (and possibly wind you depending on where he headbutts you). Amy took it in her stride, though. We went over a whole bunch of stuff including what bethend wanted for labour.

We’d already decided that she didn’t want an epidural, nor Pethidine. I’m not a huge fan of anything that cuts off feeling to your body or any drug that requires signing for. But if she had wanted it I would’ve supported her regardless. If it does turn out she needs either then that’s okay too.

We decided to have a water birth if possible. It’ll help with the pain and I think bethend would really like it overall.

That was Tuesday however. I’d been off sick from work (period pain and throwing up), went back Wednesday hoping to get back on track and when my wife got home after me she started complaining about her hips hurting. We went to bed but she couldn’t get comfortable because her hips hurt that much and she could barely get out of bed without help. She tried a bath but that didn’t help at all so we went for a walk around the village.

At this point, it was one in the morning. Not much traffic in a village at one am. Or light. There are street lamps, though not as many as in a city but plenty on the main road. We took our lantern though and did most of our usual route through the village. We had to turn around at the chapel/Pokemon Go gym. No street lights at all down Church street. I caught a Growlithe finally though and we went back home. It didn’t really help bethend though, more of a distraction than anything.

We went back to bed around half two and I fell asleep – bethend didn’t really sleep though and when we got up she was still in a bad way. We called the midwife and after I mentioned she hadn’t felt Snappy move yet this morning (he normally wakes her up) and we went straight to the ward, thanks to my sister (who had to drag my nephew out of the shower). 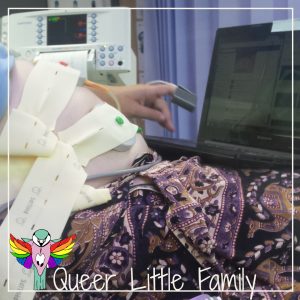 They put us in one of the birthing suites because it was empty and they needed a monitor. They hooked bethend up to the monitor that reads her contractions and his heartbeat. Once I saw that, saw his heartbeat on the monitor and heard it I realised how tense I was. How terrified I had been. Deep down I had been fearing the worse while powering through it and the anxiety hit after the good news. I thought I was going have a panic attack but the relief was a good antidote.

He was okay. He is okay. I could’ve cried. I was that relieved and that tired.

He started moving too. Rolling around and kicking and it was very comforting. At least for me. We spoke to the doctor about it all, and she thinks the baby is just getting into position and bethend’s body is getting ready for the birth. Whenever that may be. I suspect Snappy was sleeping because if bethend had no energy then neither did he surely?

So we’re back home again. I’ve had a nap, I’m not sure if bethend did though she did doze off on the way home. Her hips still hurt and Snappy is still moving around and I am still tired but we’re all okay. Back to work tomorrow (again) to try and catch up with everything for me but not bethend. After this, we (and by we I mean I convinced her) decided that it was time to go on maternity leave.

It’s really hard to chase kids around if you can barely stand up.

Perhaps the baby will come tomorrow. Or next week. Or when he wants to.

8 Replies to “Birth Plan, Birthing Suite But No Baby…Yet.”