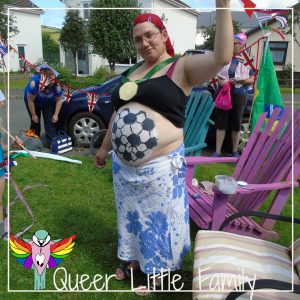 I was asked by a friend of ours who’s wife not long had her second child if I was feeling broody. I’ve spoken about it before, when we first started this whole thing and yes I was broody – though it has passed now that we’re actually having a child. Though every time I see a cute baby I feel it again and I remember that I am about to have a cute baby of my own.

A hairy baby but a cute one.

I didn’t really want to be a year ago when we started all this – I still don’t want to be. I’m not sure I will ever want to be pregnant. I never really have. A few years ago, well, more than a few years ago my ex-wanted to have kids and while I wasn’t against the idea, in general, I didn’t want to do it. It was about the permanence back then, the fact that we could barely look after ourselves (my mental health was awful), and I was still in college.

I would have to give up my medication.

I’ve actually already started the process of coming off my medication but it’s a long road and I’m not sure I’ll be able to come off the Seroxat entirely. The withdrawals are pretty rough and I don’t know if I really need them or not. The Tegretol was to keep me stable but I’m not unstable anymore, haven’t been for a very long time. I can’t be on these be medication if I want to carry a child, bethend came off her medication when we started to conceive.

If I do come off it and it turns out I have to go back on it, I don’t know what the risk is to a child and I would never forgive myself should anything happen.

So until I am sure that I could give up the medication, and stay off it, I couldn’t risk it – and that could take a few years.

I Don’t Have To Be Pregnant

It’s easy when you’re in a same-sex marriage – one of you gets pregnant, you both have a child. So I don’t actually need to be pregnant to have the child I want, to be a mum.

Sounds simple I suppose but since marrying bethend I’ve always been aware that she would have the first child, she would be pregnant first. She wants to be. I don’t. We still get to be mums.

My Hormones Are Rubbish 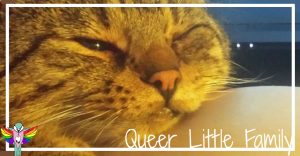 Bethend is a lucky individual who’s hormones are wonderful and she does not suffer quite as much as I do every month. My hormones are bonkers – most periods are horrible at best, I’m usually late, some months I’m unable to walk. On occasion, I miss a period entirely. I wear the patch and it gives me a bit more stability but still, it’s pretty crap and the longer I wear the patch the more my body gets used to the help. So, with bethend’s wonderful hormones have meant that most of the pregnancy has been mild, I suspect my body would not react as well. I think pregnancy would be really hard for me – plus I’m overweight and under active. I just don’t think I’m made for pregnancy.

I am fortunate – either way, my wife is pregnant with my first child and I am going to be a mum.