Not quite there yet…

Snappy has gone from only being interested in walking to crawling around the house and garden at a disturbing speed. I was pretty sure he was just going to skip the entire crawling bit and go straight into walking; I bought him a walker and everything, but he’s figured out crawling and going for it with gusto.

So the house needs preparing.

And so do the cats.

the electric wires have been moved to sit at the far end of the coffee table where he can’t reach them. Plastic plug covers have been purchased and installed. The bed end board from our old bed is currently serving as a crawl stopper between the living room and the kitchen.

The tools we’re using to build the wendy house no longer sit on the floor by the door waiting to be picked up for the next days building.

These are just the little things we’ve done over the past couple of weeks as he’s gotten quicker and cheekier. Over time we’re going to have to wing it to see what other trouble he can get into. We have a couple of baby gates to put up but I think bethend wants to build something a little more substantial to go into certain doorways. We definitely need something in the bathroom and in his room but we’ll see. The problem with the metal gate we have is that we keep tripping over the bottom bar as we’re both pretty clumsy.

The baby gates present a problem for the cats. Mostly because they are lazy and stupid. Reb will just sit next to the gate and wait for someone to come and open if for him so he can pass through. He can jump over because when properly motivated he can jump over the six-foot height back gate we have. Merry has a habit of trying to stand on the gate too, and the others will pass through if you open it for them even if they could jump it with ease. They’re already struggling with the temporary crawl barrier and it’s not even a foot high. 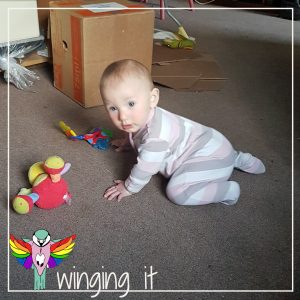 No stopping me now mummies…

Crawling also means that Snappy is going after them as predicted. Which is fine for Merry and Kitten; they’re both quick to get out of the way. The boys are a bit stupid, though. Reb especially so. He will come and sit next to the baby and then not move when he’s slobbered on or his hair is tugged. He has started biting and swatting Snappy but it’s not put him off. I’m not sure he even noticed he was being bitten. I did but Snappy not so much. He certainly hasn’t learned anything from the experience. Neither has Reb. But then I’m not entirely sure Reb is capable of learning much anymore. Also, I think he’s skull is full of cat biscuits where his brain should be.

Now the sun is coming out more (remember that? Sunshine?) we’ll spend much more time in the garden but I’m not sure how you babyproof nature. We’ve already given up trying to get him to stay on the blanket and not crawl on the grass and instead we’re just taking the grass and daisies off him and out of his mouth instead. Once the wendy house is finished it’ll be easier – he can sit in there all day he wants and chew on blocks but right now the garden is also part construction zone.

The back garden has chickens in it. They don’t peck or flap or anything. The only time they’ve pecked me is because they think the pattern of my trousers is food (chickens have poor eyesight). It’s more the chicken poo that’s the problem; though there is less of that since the bird flu outbreak. They’ve had to be confined to their run pretty much all winter and they hate it.

There’s nothing pointy or poisonous in the garden though so I’m not too worried.

Taking a picture of myself to show my sister @sian

Get yourself a good box and you can't go wrong. A

I've been missed by the cats too. Though I'd rath

I am home. I hadn't seen the surgeon all day, unt

Just cause Bow had an operation doesn't mean we ca

To be honest I don't even know how to describe thi

Just because Bow is in hospital doesn't mean that