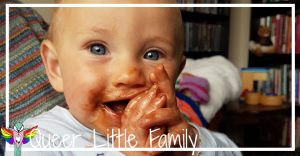 This weekend was our first Easter with our little podge. And it was a weekend of firsts for him. Chocolate, chicken and cousins. I was lucky to have the whole long weekend off, though I could’ve done with more lie-ins, but I did get a couple of longer sleep ins. That’s mostly what I aim for on a day off; an hour or two more sleep.

Sunday was also bethend’s birthday and we haven’t quite celebrated that. We’re going to have a day out for both of our birthdays (mine is in two weeks), but Snappy got her a card and present. He has great penmanship for a baby. I would’ve let her have a lie in too, but she got up at six because she couldn’t sleep and I couldn’t wake up.

We went to the easter service at the village church on Sunday morning and were on time for a change (we’re usually late). We go to the family service once a month (well, I go for the months I’m not exhausted) and we go for the holiday services, Christmas, Easter etc. I’m not religious, agnostic maybe, but that’s another post. We go and listen to the sermon and the kids play instruments while we sing hymns. Well, Snappy chews on an instrument. The Reverand is lovely but his sermons are a bit hit and miss, we kinda roll with it and I always end up with more questions for my wife.

Snappy wore his dinosaur shirt, braces and bow-tie outfit. And an easter bonnet but he wouldn’t keep that on. Unless it’s moulded to his noodle he won’t wear it. The reverend’s son had hidden some eggs around the church so after the service the kids were tearing around the place following Daniel’s clues. Well, most of the kids. My neighbour’s little boy Tommy had realised there were biscuits he could eat where all the older parishioners were sitting drinking tea. I had a few and a brew while Snappy crawled around the church.

Snappy had his first chocolate after church. My colleague Janet had bought him a massive mini eggs egg, that was bigger than his head. We gave him a bit of the egg which he ate/wore and loved. Me and bethend helped him eat the rest of the egg. I had already eaten the mini eggs. For his own good of course.

We had a chicken roast for Sunday dinner. Last year we ate John the chicken for Easter but this year we just had one from the supermarket. Not as tasty as one of your own but easier to prepare what with it already being dead and plucked beforehand. Snappy had some chicken too and really enjoyed it; though on Sunday I couldn’t watch him eat any weird bits (I’m a fussy eater) but on Monday it was a bit easier to let him eat weird chicken.

The weather was crap on Easter Sunday because you know, it was Britain and the Bank Holiday. So due to the rain, we postponed our egg hunt until Thursday. This meant my niece could come as she spends Sundays with her dad, and meant that my cousin could come with her little boy Ethan who is an adorable sweetheart.

I haven’t seen my cousin for a little while; she lives in Coventry and doesn’t drive so I see her sister more. I’d forgotten how much like my sister

she is. And Ethan has grown in the last six months, he’s so funny. He and Tommy are only eight months or so apart and when they met they stared at each for a bit before grabbing the bikes and playing together for an hour. Ethan was convinced Tom was called Dylan though and Tom kept calling Ethan boy. My sister brought her friend’s daughter Honey too, who is only six months older than Poppy (they’re best friends like their mums) so there was plenty of kids. Which was good because we had a lot of eggs with a lot of sweets in them. All of them Lily approved too as she’s coeliac.

We hid them around our front gardens, there were two gold eggs and medals and trophies for the finders of those, Poppy found one and Lily found the other. We also had an egg and spoon race; Honey won, Tommy cheated and bethend carried Snappy while he chewed on the plastic egg.

Then the kids played for an hour or so while we chatted in the front and Snappy trundled around after his cousins who were on bikes. We also ate a lot of sweets too. You shouldn’t leave sweets unguarded. We have no shame, we will take candy from babies. Snappy tried some marshmallow but I’m not sure what he thought of it. He ended up wearing most of it.

All in all, it was a good weekend, with an excellent Thursday afterwards. Bethend loves celebrating holidays and spending time with family. And well I love it when she’s happy and I like being with my bub. What more could I want? We were pretty tired after the long weekend, and Easter week in a tourist town is one of the busiest weeks or the year so I was thrown into the deep end when I got back to work on Tuesday. I don’t mind though. It pays for all those sweets!