So, the last week has been a bit hectic. I like to post twice a week at least – it keeps me writing and keeps this place active and you all something to read. I’ve managed to keep up the twice-weekly posts for a while now, thanks to writing ahead and guest posts and things like the Monthly Entertainment posts. So it’s odd for me to miss a post – with Monday’s being what I call a ‘light’ post and Thursday having no post at all – I thought I should write about what happened this week.

So the week started on Thursday night when my sister called.

So my sister called to say my dad was in the hospital but we didn’t know why. And the police had called her because they couldn’t find him before they’d found him unconscious in his house after he’d walked out of A&E. And that’s all we knew. My cousin is an A&E nurse and was there at the time but once he’d left she wasn’t sure what had happened and we couldn’t get any information from the hospital because they can’t give any out on the phone. All they could say was that he was stable and comfortable.

Plus my dad had lost his phone.

In the end, my sister decided on Saturday night that she was going to drive to Coventry to find out what was going on. I knew she shouldn’t have to go and deal with this alone so on Sunday morning we headed on the weirdest road trip ever. We always have fun together and I made some CDs so we laughed and talked and drove 142 miles (stopping off to buy dad some pyjamas and toiletries).

When we got there we got a few answers from the nurses as my dad couldn’t really remember much and wasn’t interested in talking about it either. On Monday we spoke to the doctor and got a fuller picture of what happened, what he was being treated for and what the long-term plan is.

Basically, on Wednesday night/Thursday morning my dad was blind drunk and suicidal and went to A&E for help. Cause he was drunk he walked off and went home and took an overdose. The police found him and took him back to the hospital where they started putting him through a detox. On top of that, he said he doesn’t think he has Parkinson’s, and that the shaking is all alcohol-related. On top of the state his house was in, he hadn’t been taking his medication for his Parkinsons or his epilepsy. I found two full boxes of two different medication.

We left on Monday afternoon, as I had already taken a day off work and my niece and nephew needed their mum back home. We got home around 9 pm having hit the rush hour traffic on the M6 and all the fog in the world on the mountain. Dad was in the hospital until Friday as they were unsure of his physical health – he wasn’t walking very steadily when we were there and was a fall risk.

He’s better now, but definitely not okay. He has carers coming out to encourage him to take his medication and so forth. Hopefully, social services will get more involved and he’ll be seeing a Parkinson’s nurse which will hopefully explain to him why and how he was diagnosed with Parkison’s.

So that was the weekend.

Snappy really missed me Sunday night and didn’t understand where I was and wouldn’t settle down to sleep. I was so late home that my wife had to put him to bed a second time. Mostly he was confused this time, but he wouldn’t listen to his story. When we went up to bed and he woke up and I just sat with him for a little bit to reassure him I was home again. We’ve only been apart overnight once before and even though he was home with my wife it was harder because of everything going on with my dad and I had my wife with me for comfort.

By the time we’d gotten back into his routine and he was going to bed at his normal time and sleeping a little better he got the sickness bug.

He woke up from his nap on Thursday (my day off) covered in sick and then couldn’t keep anything down for the rest of the afternoon. This included water. We both went through three sets of clothes and a lot of towels and wipes. He was in good spirits when he wasn’t throwing up and by time bedtime had passed he was mostly tired and had kept down some water finally.

He was fine all Friday; clingy and really wanting to know where I’d gone, but keeping everything down (he ate little though), only to throw up on me when I got home. I cuddled him for a bit and when I was sure he wasn’t going to throw up again put him to bed. Yesterday he was fine all day again and eating and went to bed at his normal time.

Then he woke up in the night having thrown up. Which then meant I had to strip his cot, strip him, sort that out. And then give his Peebles and quick but thorough clean with some baby wipes; He wouldn’t sleep without her and then he wouldn’t sleep with her because her hair was damp. So we just sat in the dark for twenty minutes until he fell asleep in my lap.

He’s okay today, so far. His stomach is still bad; luckily we used cloth nappies most of the time. The washing machine has been going non-stop all week though so I’m probably cancelling out all the good we’re doing to the environment with cloth nappies.

Hopefully, he won’t throw up again. I can do snot and crap and pee and food coming out of his mouth. And spit up. I can even do spit up but not sick. I don’t have the stomach for it and I can’t stand the smell.

Tonight is bath night. For everyone.

To top off the trifecta of illness Reb Brown is also sick this weekend. Yesterday he wouldn’t eat his breakfast and spent all day in bed. He’s getting old now, he was about 8 or 9 when we got him four years ago so he’s about 13 now. He’s lost some weight recently and shuddered and pauses when he jumps down from the kitchen counters. So he’s definitely getting arthritis, but he’s never been off his food before.

This is how things started when Mickey died. He was off his food Friday and by the time we got to the vets Monday he died there.

Reb spent yesterday asleep but came down to eat his dinner before coming back to bed and sleeping with us all night. Fortunately, he’s doing better today, he came down for his breakfast and has been working on it bit by bit over the door and is currently outside in the sun. Hopefully, he just ate something that disagreed with him, Kitten was a little off her food too. There is a toxic bug that gets in the house that they like to eat and then throw up around this time of year; it was probably just that and at his age, he was unable to get it out of his system as quickly as whoever threw up on my sofa and rug in the week. (Lot of sick this week).,

So, as well as that finishing two articles for a freelance job, work and trying to get more jobs, QLF was put on the back burner for a week. No blog, no promotion, no link ups and commenting.

Hopefully, back on track this week but who knows, life is unpredictable like that. Especially our lives. 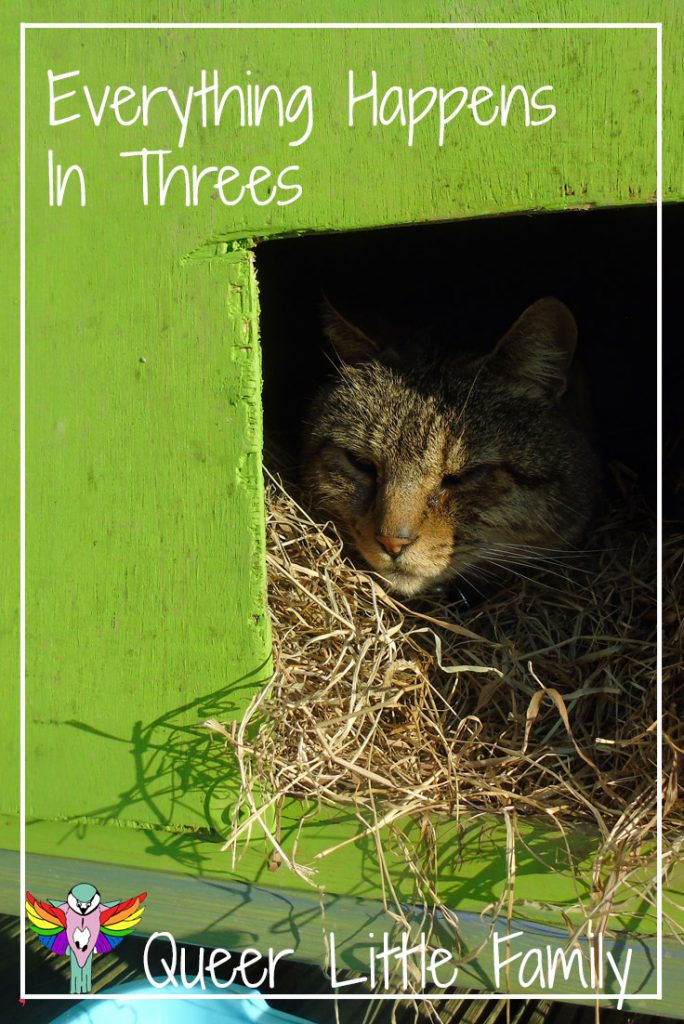