Here at Queer Little Family, we use both disposable and cloth nappies on Snappy. I would like to ditch the disposables entirely but it’s not been feasible with Snappy’s nappy rash and the fact that he moves so much in his sleep. So at night we use a disposable because we know he won’t wake up for a change and he’ll sleep right through (and so will we). We also use them when going out cause it’s easier than finding a place to change him if we’re grocery shopping or on a long journey (changing a baby or toddler on a train or plane is a nightmare). At home or for short journies and nap time it’s cloth nappies all the way.

So here are some good reasons to switch to cloth nappies or even combine them like us.

I got my nappies from Little Lambs, one of many companies that make cloth nappies. I bought a deal where got a certain amount of nappies for fifty quid. So overall I spent like eighty quid on coloured nappies and the inserts. I don’t have a huge supply This will save you so much money cause it costs about six hundred quid in disposables roughly for one child’s run until potty training. If you switch or combine you’re saving hundreds of pounds. More if you have more than one kid. And yes, the downside is the extra laundry but if you have a toddler and you’re not already doing an insane amount of laundry every week then there is something wrong and I need your secret.

Due to the wonders of science and technology and the insane amount of money nappy companies have to put into developing them, disposable nappies are really, really good. Snappy will sleep for twelve hours straight with a disposable and not even want to change then, but will need it because his nappy will be hanging around his ankles. They absorb the liquid so well, he’s rarely needed changing at night. Seriously, Lidl nappies are awesome and I’m pretty sure they’re absorbing any liquid within a five-foot radius of my son at any given time.

So, I can see why so many people are reluctant to switch over, but one great plus is that because cloth nappies are not super absorbent your kids know when they’re wet. This makes it easier to potty train because they know the signs of having been to the toilet, and they learn the cause and effect of a wet nappy quicker than toddlers in exclusively disposables. Snappy is only twenty months and we’ve been potty training for a few months now with some success. It’s a work in progress though, and one made much easier by cloth nappies.

Cloth nappies mean less disposable (and non-biodegradable) nappies are filling up landfills around the country. Of course, it’s not that simple, but around eight million nappies end up in landfill every day in the UK alone, and they take a couple of centuries to decompose!

The con of cloth nappies is that they need washing and drying. But there are ways to minimise the effect the extra laundry has the environment. Use the most environmentally washing machine you can afford. Anything over a C rating. Make sure you only wash full loads and using any eco settings your machine has. Running washes at thirty save a lot of energy overall and with a decent washing detergent doesn’t really affect the quality of the wash. We have a 40-degree eco wash that we use but the thirty works fine most of the time.

Plus, there are plenty of other ways to offset the extra laundry time that have nothing to do with nappies, like reducing your plastic use and so on.

I’ve never bought specific swim nappies for Snappy cause they’re usually twice the price for, for I don’t know what. We’ve always just used regular nappies under his swim shorts or his swimsuit. He doesn’t swim for long, so it didn’t really matter. Though when we were on holiday in the US we spent a lot of time in the pool especially in the morning when the jetlag and time difference had us all up early with nothing to do. The regular nappies swell up so much in an attempt to absorb the entire pool (and once, the Atlantic ocean).

We went swimming last week and my wife had the idea to use a cloth nappy instead of a regular one. Under his swim shorts, it fit well, and worked really, really well. It didn’t swell up but kept the pee in and while he wasn’t happy, his bum wasn’t three times its usual size when swimming.

If you only bought a couple and did a lot of swimming, they’re definitely cheaper than swim nappies and worth it.

They Look So Cute

We didn’t get any printed nappies, the ones with patterns and prints are more expensive and it doesn’t add anything to their ability to absorb pee. Seriously, a geometrical pattern is not making a nappy any more absorbent, so we just went with some plain colours. I think some companies sell white ones too and they’re probably cheaper if you’re looking to maximise your savings.

We have orange, purple, red, blue, green, teals and yellow. No pink cause there wasn’t any pinks ones, unfortunately. The colours are still really bright over a year and god knows how many washes later and he’s so cute in them. I mean he’s cute anyway, but pretty much during the summer, he’ll only wear a nappy (and not always that). Right now it’s a chilly spring so he’s dressed in the morning and then in the afternoon in just a top and cloth nappy.

No, I do not match. It’s hard for me, with the OCD but trying to match a toddler;’s clothes is a fast way to madness and 100% do not recommend. Unless you just buy them multiples of the same top and trousers. And never put them in socks. 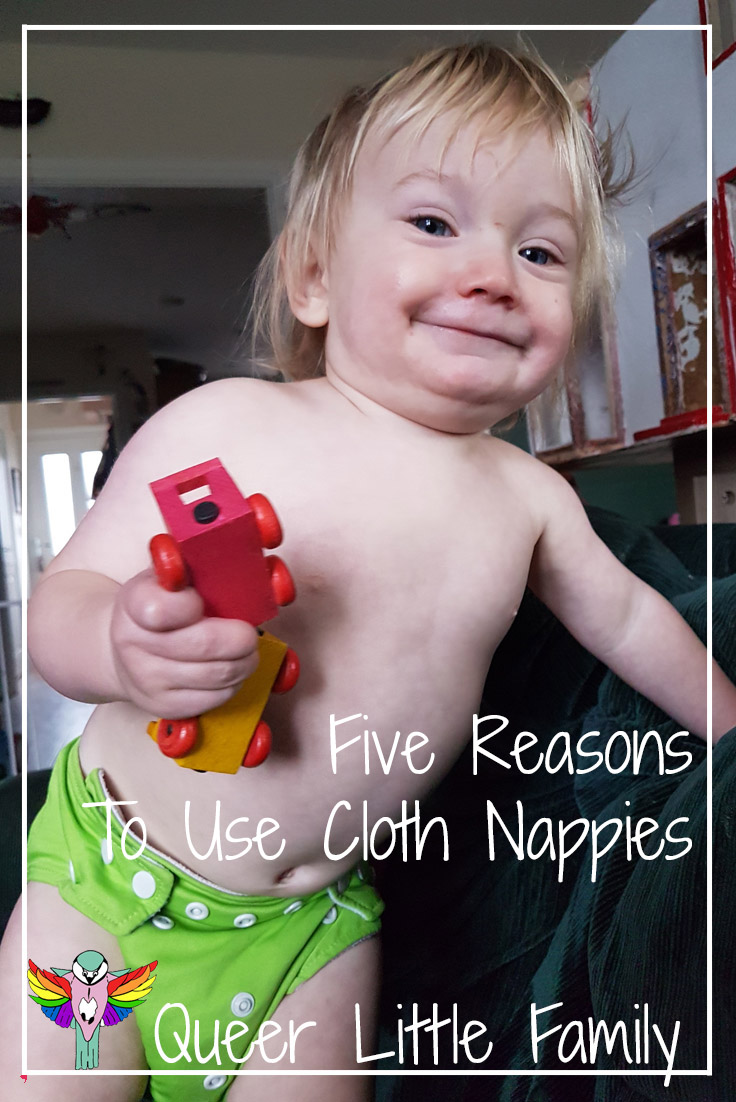 It’s up to you what you think it best for your kid, and works best for you and your family. Don’t let anyone tell you different and don’t let them judge them for you. If you haven’t got that 100 quid initial outlay then it’s okay, keep up the weekly spend. If you want to combine them like us then go for it. Or if your kid always gets rashes in disposables then I’m glad there is an alternative for you. We combine because it’s best for us. Cloth diapers can give him a rash on occasions, a bad one. Both my sister and I were the same as kids, allergic to the cloth nappies but fine in disposables.

Whatever you chose, make the right choice for your kid. That’s all that matters.

9 Replies to “Five Reasons To Use Cloth Nappies”