If you follow my instagram you’ll have noticed we were in America last week. For ten days. We took our son and our fourteen year old nephew Taylor to celebrate Snappy’s birthday and visit his American family. My in-laws hadn’t seen him since he was born and the rest of my wife’s family had only seen pictures. They also invited Taylor to come with us. So the four of us embarked on our holiday!

I’ll probably post more in the future about different things we did but here’s a recap:

I got asked this a lot on holiday – “How was he on the flight?” in reference to my son. He was fine. We were worried he’d be upset and in pain from his ears popping (I’d even packed some paracetomol for him) but he didn’t even notice. We got up at four am having stayed ovenight at a hotel in Birmingham. On the flight to Dublin he fell asleep as soon as we took off. On the second flight he didn’t like having been attatched to me or my wife on with the stupid lap belt but other than that he was fine. He even slept for a bit. My nephew watched Bad Boys. 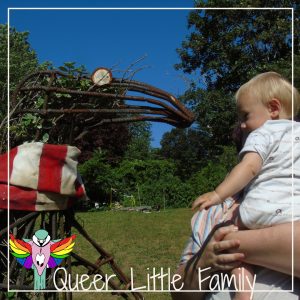 We flew into Boston, met my in-laws and drove up to the hotel in Cape Cod. The hotel was on a golf course and my in-laws were booked in for early moring round under the misguided impression that we would sleep in.

We were up at four and in the pool at seven. It was a little cold at first in the water but we all enjoyed our first morning there playing in the pool. Snappy really loves being in the pool and playing with Taylor. While in the Cape we went to P-Town (my favourite place in the US) and the gayest place on the east coast. It also has some of the best ice cream ever and a gorgeous beach.

We went to Sandwich for a day and had lunch and shopped a little. Spent some more time in the pool, Snappy learnt a new trick ‘drowning‘* his cousin Taylor. We visited the Edward Gorey House which was amazing and definitely worth the visit. And you need to have some Edward Gorey in your life. It’s an amazing illustrator. We went to the beach and flew the kits we bought at Dr. Gravity’s Kite Shop. Snappy ate a minimal amount of sand, Taylor burnt one leg and foot (not sure how).

After our beach jaunt we headed down to New Jersey. 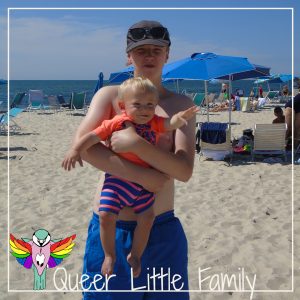 If you watch anything on tv set in America, especially stuff set in New York, there will be jokes about NJ but it’s a lovely place full of really nice people. And okay the show Jersey Shore probably didn’t help the reputation but I always like it there. The first few days we were there were spent preparing for the party. My nephew and father-in-law really got along and they went all over the place sorting out stuff, Taylor was really helpful the entire time we there, never complained, wasn’t overly annoying and generally a good kid that pretty charmed everyone he met. He was really well behaved for a kid that was grounded for the week before we left.

We took our son down to meat his ‘hen-nain’ – great grandmother – and his great aunt Ellen who live down ths street and do some preparing of our own. My wife’s grandmother was really pleased to meet the little guy – her grandfather died in January and Snappy looks a lot like him.

The party was great in a lot of ways but I didn’t enjoy it much. It was nice too see some of Bethends family who I get on with, and to meet Snappy’s cousins. He had a really good time considering there was around seventy people there. I was quite anxious but I made a new friend in one of bethend’s old friends, saw her uncle Herb again who I adore and hung around with the same crowd as I did during the last party they threw. I met some friendss little boy who was born in between visits and who I adore. He’s is the funniest little boy. I think I was appropriately social during the party and no one seem to notice I checked out in the end and hid in the living room. 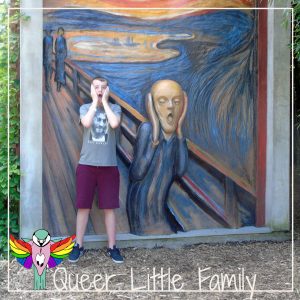 The sunday after the part we took Taylor and Snappy to Grounds For Sculpture. It’s an old fairground that one of the Johnsons (of johnson and Johnson) turned into a walked around art exhibit for sculptures and art of all kinds. They often move things arund and add new things. It’s a great place and one of our musts when we started talking about what we wanted to do on this trip.

We also went to stay with friends and their boys who live further north, did some shopping and went swimming. The we went to visit my wife’s other grandmother in the home she lives in that’s run by nuns (actual nuns) so she could meet her new great grandson. She loved him and spoke about him and Taylor for hours after we left.We also went to a restuarent called Bum Rogers for lunch and took a work on the Jersey Shore boardwalk in the rain.

The day we left we had our son blessed at my wife’s old church, had a last lunch with her family, packed up and headed to the airport. 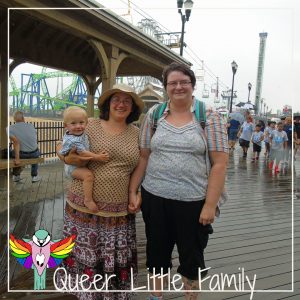 The flight back was not so great. It was an overnight flight so by time we got the plane it was already nearing Snappy’s bedtime. He wouldn’t settle and because of safety rules couldn’t stay in the sling my wife was wearing during take off. Or turbulance. He had to be atached to her in a lapbelt that wouldn’t stay tight and he just wriggled out of. Instead of the nice secure sling that kept him still and calm…

Anyway. I finally got him to sleep and we hit Dublin at half four in the morning. My friend had booked us into the executive lounge which was awesome. And quiet and we just chilled out there until it was time to board our flight. By time we got back to our home we’d all been awake for thirty hours and were barely functioning – except for my nephew who was insistant that he was going to see his friend as soon as his mum picked him up.

I can only assume he did what we did. Go to bed at half seven and sleep in til eleve.

We got back a week ago and I still don’t feel recovered.

We had a great holiday overall and it was a hell of an experience for my nephew who has only been to Paris for the weekend. I think perhaps it was too long or I would do some things differently when it comes to travelling with a baby but that’s for another day. For now I’m just glad to be able to sleep in my own bed!

no teenagers were harmed in the making of this blog post.

One Reply to “QLF In America: A Holiday Recap”