And Then You Were One

Today is my son’s first birthday. 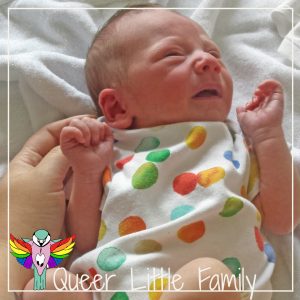 He’s now a little boy instead of a little baby and I could not be prouder of how far he’s come i. n the last few weeks, let alone the last twelve months. He was once a tiny mash potato and now he has features and personality. Likes and dislikes. He’s learning so fast and I can’t quite keep up with him.

Literally in some cases.

I never thought I would be here. I never thought I would have kids. It’s not that I didn’t want them, I just truly believe that i would never have children. I never even imagined it as a child even, never really had picked out my future child’s name, never really played ‘house’. I just accepted that I would not have children. I’m not sure there is a specific point to it all, that’s probably another post though.

I am a mum now so whatever I thought back then doesn’t really matter now.

Phineas makes me so happy. I can’t even describe it but I’m sure that other mums will understand. Some nights when I get home late from work and it’s past his bedtime already I will just sit in his room and hold him while he falls asleep on me. Just so I can feel complete for a few minutes. 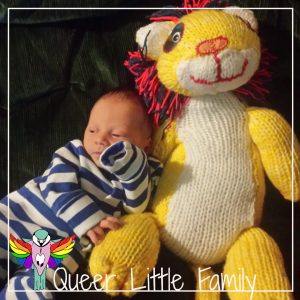 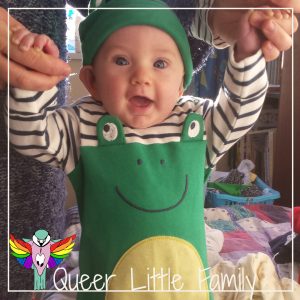 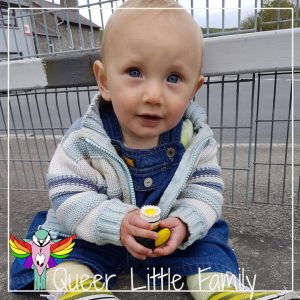 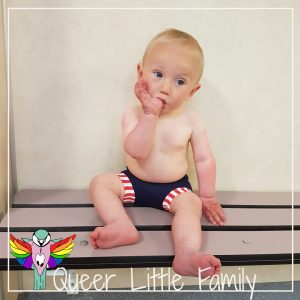 Just in the in the past few weeks he’s come along in bounds and strides. He’s standing up on his own but won’t do it unless he wants to. Which is my bubby all over really. He’s trying to feed himself with a spoon. or a fork depending on we are using. He’s started copying us a lot now, especially at dinner time.

One Friday he had a crazy day.

He managed to get all the way up the stairs, and then, after closing the stair gate on bethend he chased Kitten up the ladder that leads to the attic. He also learned how to play with his bouncy ball himself; bouncing it and chasing it around, and he started singing to himself. The singing is particularly adorable and is mostly just him going “Du Du Du DA!” but when you listen to him carefully you realise he’s singing ‘Row Row Row Your Boat.” Which is what I sing to him when he’s going to sleep or needs calming down.

He doesn’t have any teeth yet, despite the amber necklace that my friend bought him. I don’t really believe it’s going to work – he might as well be wearing a puka shell necklace – but he looks cute in it. 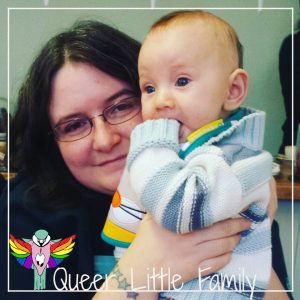 I’ve had some milestones myself. As an anxious mum with depression (among other things) it was never going to be an easy transition. It’s not for anyone but I felt like every failure was going to be the end of everything. My marriage, my motherhood, my life.I was walking on thin ice over shark infested waters.

I’ve managed to overcome a lot of the anxiety. I’m not going to lie, I’m still struggling with more anxiety, depression and negativity than I would like but that’s always going to be the case until there is none. Which seems unlikely.

However I’ve been going places ans doing things without hesitation. I’ve been to baby group a couple of times even though I do not fit it because I can spend time with my son. I suggested we go to the b each, and then at beach went into the sea. Willingly. Cause I wanted to take my bubby into the water. I go places and do things, I suggest it. Before, if I could I would wriggle my way out of even sitting in the garden. But Snappy has given me reason to go outside, to take him places and experience them. I willingly surround myself with people I don’t know for him.

I hate people but I love my son. So I do it. 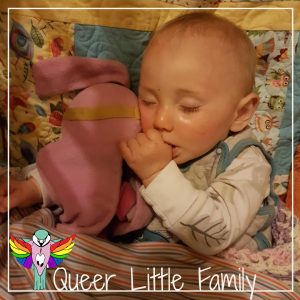 We’re having two parties for his birthday. We’re going to the US for ten days and while we’re out there we’re going to have a party for him and his twin cousins who are a few days younger than him with his American family. And it’s a big family. My family is as equally big but we don’t really get together like bethend’s family do. So big party for my son in one country, then back home for another party with his British family. Well some of it cause we don’t quite work like bethend’s family. So friends and family will come to ours for cupcakes.

We’re getting him a fishtank for his birthday. He loves fish so we’re getting him some of his own. We’re going to get people to chip in for it and some fish too. I’m not sure what else we’re going to get him. I’m tempted not to get him anything else from us, because it’s just stuff, he’s only one and he will get a lot of presents from everyone else.

For Christmas we took him on a trip, and got him little things to open but he got so much stuff from family and friends. He’s a popular little boy. Hopefully that will extend through his entire life.

So happy birthday to you my baby. You are so loved. Now and forever.