This is the holiday time of year. Some of the good ones that I like – such as Bonfire Night and Thanksgiving. Some I’m apathetic about such as Christmas (we’ll get back to that). I really enjoy both Halloween and Bonfire Night; though when I was a kid I never really did anything for Halloween. I think I went Trick or Treating once. I vaguely remember being a witch in bin bags and going up my nan’s street with my uncle and sister. It wasn’t until I met my wife that I really did anything for Halloween. Now we dress the garden up every year for the neighbourhood trick or treaters. One year we had milk bottle ghosts lit up in the front garden, this year a cardboard tube skeleton 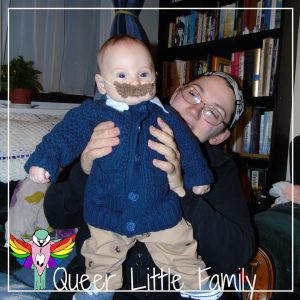 This year we dressed Snappy up too. His first Halloween involved two parties and a lot of trick or treaters from the village. That’s something I really like about living in this village – a lot of great people and a lot of kids. We were very busy. We dressed Snappy up as his papa for the party at the village caravan park  – he’s looking a lot like my father-in-law so we made him a fuzzy moustache and put little collars on a cardy. You can see for yourself, the resemblance is uncanny.

For the party at our friend’s house, I dressed him in his R2-D2 outfit. Best six quid I spent buying that thing. I love it. So cute.

He enjoyed himself – you know, for a baby. I didn’t enjoy the party in the village much. Too many people, not a lot of people I know. No one I knew well. We had a drink and some food and went home. The Sunday party was better – good friends, better food, lots of fun.

Bonfire Night is one of my favourite times of the year. it’s cold so we all go and stand in the dark to watch wood burn at a safe distance and fireworks while waving sparklers dangerously at each other. This year we went to the village show put on by the pub, met up with my sister and nephew and some friends after we ate and watched the fireworks. The kids had sparklers and I waved one around for Snappy to watch while we waited for the bonfire to be lit and the fireworks.

The bonfire was lit by three guys holding petrol cans and pints. And ten minutes after bethend finished explaining to my nephew that it was not a ‘bomb’ fire, they lit it and there was a massive boom. A boom that shook houses as I discovered from my colleague whose son lives across the road from the pub. Everyone about had a heart attack apart from Snappy. He was just mesmerised by the huge fire in front of him.

It’s not the first fireworks he’s experienced so I wasn’t too worried that he would be upset. Though these were louder and brighter it turned out, but he really enjoyed watching them. He was his usual happy self, watching the fireworks from his pushchair for a while until I took him out and held him so he could see a few of the ground ones better. It was fun, he won’t remember it, though, but that doesn’t matter in the here and now. I will remember.

I’m loving all these firsts. Next is Thanksgiving and then Christmas.

Check out my post of the Cuddle Fairy’s Happiness Series!

One Reply to “Halloween and Bonfire Night”