So, bread and bethend, who are these people? And why write a blog?

You’d think this would be an easy post, but as my anxiety bubbles up, I have to wonder if this is what’s causing it. Even though I have an entire blog about myself and my life, this includes my wife and I hold her very close to my heart.

I’m Bread, I’ll do most of the writing. This was my idea. Most people call me Bread but it’s not my actual name. I’m 33 and was born in England but consider myself Welsh. I’ve lived in Wales since I was ten – including a brief stint when I lived in Leicester. I’m bisexual, have been out since I was about 20/21, genderfluid too though this is a more recent labelling. I’m a geek and poet and work in a pharmacy. 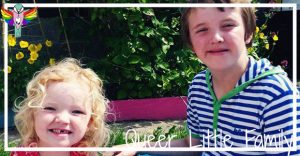 I have a sister – who has two kids a boy called Taylor who’s 12 and a girl called Poppy who’s 5. My mum and her partner live up the hill from me. My dad lives in Coventry. I have a large extended family who lives all over the place.

I suffer from mental health problems. I’m mostly recovered from a lot of them, but I still struggle with anxiety and depression.

Mostly I just want to live a good life and be a good mum.

My wife is bethend, not her real name. No one calls her that, it’s an internet thing. I don’t mind. I call her babchen. That’s not her name either. She’s 29, born in America but considers herself Welsh too. She came over here as a student seven years ago and decided to stay. She can apply to be a citizen in a couple of years. She’s gay, been out since she was a teenager. She’s also a geek, a history major and works in a nursery (one of us may know what they’re doing).

She has a brother. Her parents, aunts and grandparents all live in America, we talk to them on a semi-regular basis on skype. She has a large family too and is much closer to them than I am to mine.

Mostly she just wants to be a good mum. She already lives a good life. You will never meet a better person than my wife. Fact.

We have five cats, three chickens and three hamsters. We live in a little village on the edge of nowhere Wales. The sea is on one side, the hills are on the other.

We’re very similar in a lot of ways. We like old films and sci-fi and reading and video games. We’re also very different. She’s very organised, plans everything, is tidy. I’m the one who’s winging it really, I do everything in a haphazard manner, turn up late and generally just hope for the best.

I want to write a blog for a couple of reasons. One, I didn’t want to turn my blog Weird and Important into a parenting blog, I wanted to continue to write a bit of everything there. And I thought it would interesting to have a niche blog for a change.

Two, I really like to write. I’m always writing something. I have a lot of thoughts and ideas and words rattling around in my head. Bethend has a lot to contribute too, she’s the more artistic and crafty of us. Plus she cooks. Really well.

Three, I liked the idea of a no-faff parenting blog. Not one where I’m not telling you what to do, or what you should be doing, or that you’re doing it wrong but one where I’m telling you what the hell I’m doing, for reasons unknown or because that’s the only way I know how. An honest, approach to the reality of having a family. And the reality of being queer and having a family. Advice, screw it, this is what we’re doing because we’re weird, and skint and have cats.

So there you have, this is us. Me, my wife and eventually a baby.