Moving Into Our Own Room 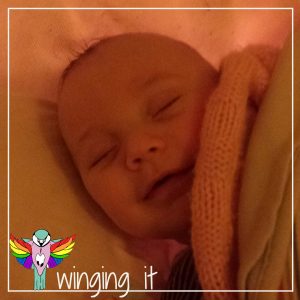 Smiling in his sleep in his basket.

We’ve finally moved Snappy into his own room. It’s been a bit of a struggle but then I doubt there are very many parents who find it easy to move their kids out of the basket and into the cot. He’s literally on the other side of the wall and we’re not even using the baby monitor right now; we keep the doors open but at first, it was awful.

He’s too big for the basket though. Not too heavy, he’s in a low percentile for weight – consistently so – but he’s long. He has long legs, most of his onesies don’t fit in the leg long before the rest of his body grows into them. So at six months he only really had a couple of inches left to go in the basket. We were having trouble keeping himself down for the night because if he was close to the end of the basket he would kick at it and wake himself up. We had to make sure his head was almost touching the top so he couldn’t feel the other end.

So definitely the time to move into our cot. 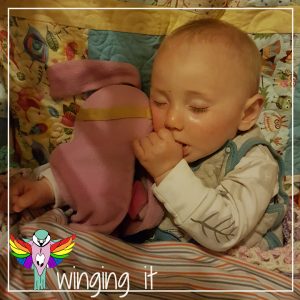 A thumb and his Peebles and he’s happy.

He settled quite well in his cot during the first week we put him in there. He didn’t sleep through the night or anything like that, but he settled down right away without any complaints. We were not as settled. The first night was awful. I couldn’t hear him and we just lay awake for ages just trying to listen out for him; either his crying or his breathing…something.

Luckily he snores, like his podge mummy, so that was comforting. After a while, I slept too. We both did. And we heard him as soon as he woke later in the night for a feed.

For that first week, it took a while to settle into a new routine and ignore the fact that the basket by the bed was now empty. We couldn’t hear him snoring every night and sometimes I was convinced he was dead. So a couple of times during the week I would get up and check he was still breathing. I did it when he was in the basket too and he was just quiet.

To be honest I still do on occasion.

To be really honest on occasion I have to check my wife is breathing too. It’s a fear I have, what can I say. I sleep better for having checked. 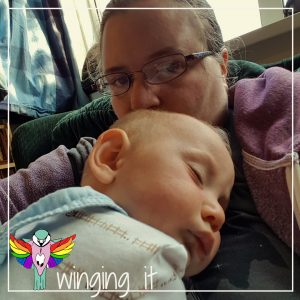 He fell asleep on me for the first time in months.

The first night we went out and left him with very capable babysitters, he was getting a cold. I had a hacking cough too. He got a little worse over the weekend and couldn’t lie down on his back without coughing and waking himself up. So worried mummies that we are wanted him close at hand, and it’s much easier to prop him on his side in the basket than it is in the cot.

So for a week, he slept back in the bedroom with us, all three of us coughing in the end, but on his side, he slept much better. It was nice having him snoring on the other side of the bed again.

However, this ruined all the progress we’d made the week before and he’s still not quite settled as well as he did for that first week. When his cough was better, when all our coughs were better we moved him back into his own room. But he wouldn’t stay down for long, waking up more often for feeds or attention (usually both) and struggling to settle down again.

In the end, we managed to find a way to lie him on his side, propped up against the side of the cot, with some blankets as cushioning.

Baby Bear’s Bed Was Just Right (In The End).

We also realised that the cot mattress was flat and hard, especially compared to his basket mattress. We’d put a towel under one end and both the mattress and the basket were a little more forgiving than his cot.

He would get so upset lying on his back we genuinely thought something was wrong with him and took him to the doctors. He suggested infant Gaviscon, so we got some (you can buy it over the counter). It didn’t really make much difference though, he didn’t mindtaking it but it’s a pain in the backside to prepare and I really don’t think it did anything.

Plus I didn’t really think it was indigestion or wind either.

It didn’t occur to me right away that this might be a problem with his mattress but it was an easy fix. A pillow under one end of the mattress and a duvet under the quilt he sleeps on top of (instead of a sheet). That seemed to work when combined with lying him on the side.

Sweet Dreams Are (Sort Of) Made Of These 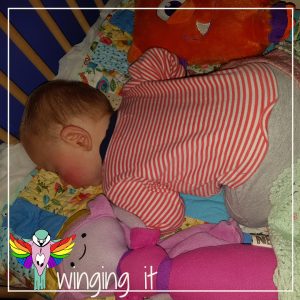 Bum in the air is the way to sleep apparently.

We’ve recently learnt that he prefers to sleep on his belly. He settles down right away if you put him on his front and bethend is the same; she will always sleep on her front if she can. This comes with greater risk, but we’ve minimised it by making sure there are no extra blankets around and the quilt he sleeps on is always pulled tight and flat each night.

It’s sort of working. He’s had a stomach bug this past week which has made him clingy and hard for him to sleep in any position or on his own. At one point he would only sleep slumped over bethend. So this week has been hard; I’m working overtime and writing as much as I can at home, plus a whole host of other stuff is going on (another post for another time). Bethend isn’t getting much sleep or any break from it all.

The past two nights he’s settled well on his stomach, only to wake up later in the night and not settle down again. It may be the lingering stomach bug or he may be having a growth spurt. Or he may just be a little bum. We’re not sure, but with the bank holiday upon us, I’ll be doing the night shifts. This way my wife can actually get a break and some sleep. I’ll just sleep in during the morning.

Hopefully, next week will be easier as his health improves. We’ll see. If not, then we’ll try something else.

Any suggestions you might have would be greatly appreciated though.