Our First Night Out 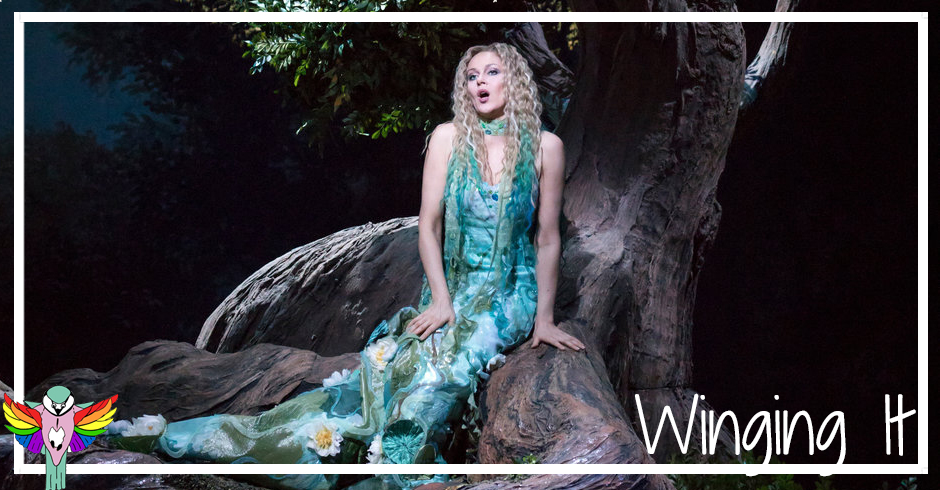 A scene from Rusalka

On Saturday The Met Opera Live in HD was broadcasting a new production of Ruslka which was being broadcast at the local Arts Centre. We love Ruslka, it’s a great opera and we really enjoyed the last production with Renee Flemming.

So we really wanted to go again and it’s been a while since we went to see a broadcast of an opera. Or anything really. There’s just one problem. Babies and opera do not mix. So for the first time we left Snappy behind and went out without him.

I really wasn’t sure about going, and neither was bethend. We talked about it, changed our minds a couple of times – especially when Snappy got a cold and started feeling ill. But then she bought the tickets anyway, and arranged for our neighbour (and Snappy’s future godparents) to take care of him for the evening. Even though we were both umming and ahhing over going we knew we wouldn’t waste the money.

He started feeling better though and we started looking forward to it. I hadn’t been feeling well recently, I had this cough that really started to hurt and tire me out. It’s been a while since I’ve had one this bad. I’ve actually been too tired to cough at points and needed my inhaler several times over the course of the few days. But I knew bethend really wanted to go, and I like Rusalka. I just like being inside and away from people too. More so when I’m ill.

We packed up a bag for Snappy, and a box of snacks, put him in his pyjamas and took him over. 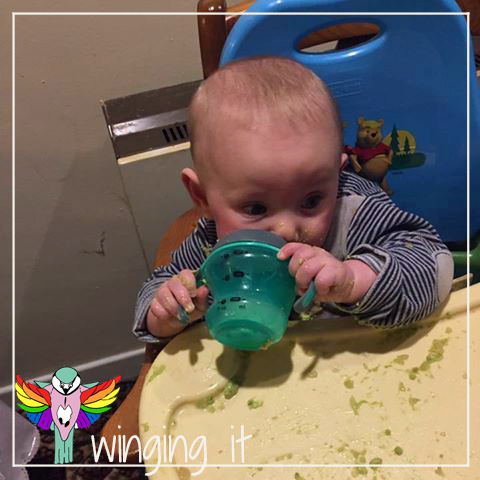 He’s still figuring out his cup.

I leave him with his mummy though.

It felt weird. Walking with my wife without him. Hell, it felt odd to be holding her hand again – since he was born we’ve hardly held hands because one of us is usually pushing the pushchair. I didn’t really get used to the sensation again until we were on the bus. Then it was raining and we had to get a cab up the hill (I was not walking any further than I had to with that cough) and I just sort of…put it to the back of my mind.

I know bethend felt guilty, because we were out having run and he was at home. The only times she’s left him with me is when she’s gone to doctors appointments.  I didn’t feel guilty. I worried that he would get upset and then be inconsolable because he needs his mummies.

He didn’t need his mummies.

Sarah understood what we were going through, told us she would call and send Al to get us if anything went wrong. That she would even send Snappy with Al if needed. And she would let us know how things were going too. When we dropped him, her daughter L (the five year old) picked him up and took him over to the playmat with her brother without even being asked. She loves Snappy and she’s a very caring kid.

We got our first update during the introduction part of the opera (they do backstage interviews and bits before and during the opera) and I felt a lot better having a few pictures sent my way and an update on when he went to sleep. Our neighbour picked us up too so we didn’t have to wait for the bus home and told us that everything was okay. We were pretty tired by then but full of opinions on the production we had just seen that Al knows nothing about. Bethend is always trying to get people into opera (don’t knock it til you’ve tried it). 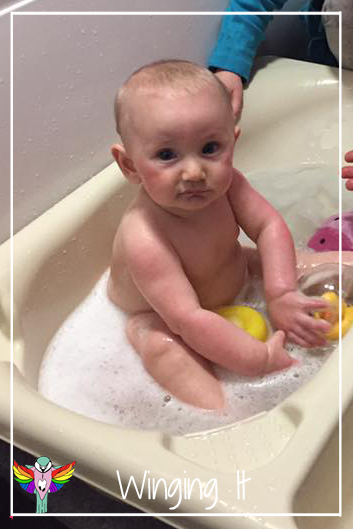 This face says ‘Saturday is not bath day aunty Sarah’.

When we got home Snappy was asleep in his pushchair (it has a muff in it and he always falls to sleep better in it) and I didn’t even stop to pick him up and hug him. He was fine, we were fine, but I always miss him when I’m at work and this was no different. We talked about whether he actually managed to eat or drink anything (he’s stubborn and wants to feed himself) before thanking them again (seriously they are the best neighbours – you have no idea).

At home, bethend fed him and had a cup of tea in bed and relaxed again, safe with our little croc back where he belongs; with us.

At least, until the next time.

The next day, the first thing L said when she saw my wife in the garden was how she had looked after Snappy all by herself. I think her mum and dad would dispute this. I adore her and I know she would’ve helped. Sarah says she helped give him a bath – though he didn’t enjoy it as much as L treated Snappy like her brother T who is bigger and little more robust than my six month old.

It was hard but easy. Does that make sense? Once I saw his face on my phone I felt better and I trust my neighbours. They’re our friends and they trust us with their kids all the time. But I hate leaving him

I hope it gets easier. Cause I have years of back-babysitting to cash in from my sister…