Herding cats is a dangerous business. I should know I do it on a daily basis. In case you didn’t know; I have five cats. Not on purpose. it just sort of happened. I explain why here. Cats will purposely injure you and while I’m pretty sure Reb isn’t trying to trip me up he does it every day. Every single day. So here are my top five cat-related injuries, ranked from the rarest to the most common.

Reb Bown is our randy old man cat. He’s nine or ten years old and pretty much related to every stray in the village. He moved in with us because the vet said he really shouldn’t be going out anymore. He’d lost one fight and would continue to lose fights until he was killed. so we don’t let him out of the house unless he’s on his lead. Which is fine.

Until he gets out.

This is how I broke my ankle in two places and damaged the tendons enough that I was in pain and needed physio up to a year later.

Reb got out one night, my wife and nephew went after him and I went and grabbed the cat biscuits and went after them. On the way out the door, I tripped over my own front step and went arse over tea kettle. As I lay sobbing in the driveway, cat biscuits scattered all over the tarmac, Reb came ambling up and started eating them. my nephew scooped him up and took him inside, and my wife scooped me up and took me inside.

I walked on it for three weeks without realising I’d broken anything until I went to the doctor cause the pain hadn’t improved nor had the swelling gone down.

Cat Bites On My Calf

So you may be aware that my wife gave birth in the bathtub. Not by choice, we were sent home and then things got a little out of hand.

Which is how I ended up getting bitten by my cat. Twice. And also breaking a litter box.

I had run a bath for bethend after we were sent home from the hospital and in between contractions and screaming, watched the Olympic wrestling on her laptop in the bathroom. We drained the bath when things got really bad and I was on the phone to the ambulance when my son was born.

So distracted by this, I tried to sit on the litter box – a plastic storage box we’d modified. This would’ve been fine I think if it weren’t for the fact that I weight sixteen stone. I crashed to the floor and cried out because something had hurt my leg, a lot. I’d assumed some of the plastic from the box had stabbed me in the leg. Then it happened again, that flash of pain and I turned around to find Merry hissing at me and two bite marks in my calf.

Scared by all the excitement, the screaming and the crashing litter box she had lashed out and bit me. Twice.

Nothing compared to what my wife went through but definitely a one-off (the next one is getting born in a bloody hospital).

Bruise On My Forehead

Every morning my wife puts the cats out. We started doing this in our old house because four cats screaming for breakfast every morning was barely tolerable. Four cats and a kitten and a toddler all screaming for breakfast and mornings are hell. So the cats go out and my wife concentrates on Snappy’s needs before attending to some overly dramatic cats who are not as hungry as they say they are.

This routine of morning cat removal is how I ended up with a small lump and large bruise on my head.

Some mornings I put the cats out for her. Some of the cats are more reluctant than others to go out. Reb really wants to go out, Kitten too. Merry not so much and Pogo always ‘hides’.

One morning a couple of weeks ago I had managed to get some of the cats out the back door but in putting Merry out, Pogo ran back in. I bent over quickly (really quickly) to try and catch him a second time.

I miss him and hit my head on the sofa instead.

I won’t be doing it again – seeing as Pogo is an awful hider and was immediately caught by my wife and taken outside again.

My cat Merry has given me a few good scratches. Mostly when I catch her to put her outside. it’s my own fault though.

My cat Stink has a few problems from having no mummy. He was found in the woods living with two other older kittens at three weeks. He’s somewhat infantilised and has Rhineneck.. He still has his kitten scruff even though he’s nearly four years old and this is how I grab him. It doesn’t hurt. Mostly it just annoys him I think.

Merry does not have her kitten scruff.

I forget this sometimes especially when I’m grabbing her quickly without thinking and instead of grabbing her harness I miss and grab her nonexistent scuff.

This hurts. I hurt her and I’ve done it once unfortunately and learnt my lesson. She’s bitten me and scratched my hand to the point of bleeding. I deserved it. I won’t do it again hopefully.

Nose Nips (And Ears and Face and Toes)

Every morning Pogo gets on the bed and starts bugging us for breakfast. Nearly every morning he bites one of us. Usually, he’ll bite Bethend on the nose. Even if she’s buried in the duvet he will dig in and bite her. Sometimes it’s just a nip, sometimes a proper bite.

If he doesn’t bite my wife he bites me. I’ve been woken up a few times by nips on the nose. If he can’t reach my nose (after some digging) he’ll bite my ear.

He can be the sweetest cat and the most annoying jerk.

Bonus Entry: My Wife Was Headbutted In The Throat 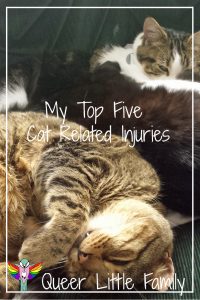 Reb Brown is a big cat. A big dumb soppy cat. I love him (don’t tell anyone) but he’s really, really stupid. Sometimes I’m not even 100% sure he doesn’t just have biscuits filling up his skull instead of a brain. But I digress.

He’s very affectionate, always has been. Even before he moved in with us, he is a very trusting cat who just wants fuss from whoever will give it to him. Even if’s it’s an overenthusiastic toddler. He will come and sit in your lap (even if it’s full), he will rub up against you. And he will headbutt you.

Which is fine if it’s your leg or a more solid part of your body. But he’s a six-kilo cat and he is strong.

And he’s an idiot.

And that’s how Bethend got headbutted in the throat. Which led to her chocking coughing and having a hoarse voice for a couple of days. Oh and a bruise.

*Disclaimer, I do not throw my cats.

Do you have any cat related injuries? Ever been injured by a pet? Tripped by a snake, splashed by a goldfish, goaded by a dog? Let me know in the comments maybe we can form some sort of support group.