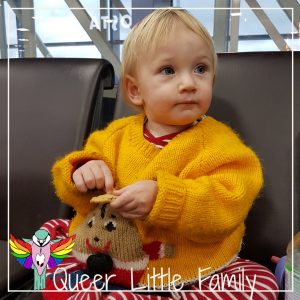 For Christmas this year I took my wife and son to Dublin for a few days. Last year I decided to take Snappy on a trip to see the Festival of Lanterns in Birmingham and the SeaLife Centre. He was only four months old and wouldn’t really know what the fuss was about. He liked lights and fish and I knew it would be something he would enjoy. I decided then that every year his Christmas present would be a trip rather than toys every year. He has a large extended family that buy him gifts.

So this year, as my best friend Mel couldn’t spend Christmas with us, we went over to Dublin to spend Three Kings with her.

We flew out on Thursday, and back again on Monday giving us three full days in Dublin. We managed to pack quite a bit into those three days. Snappy had so much fun, everything was exciting for him. He spent twenty minutes every morning standing on the bed by the window shouting at the cars in the hotel car park. We needn’t have done half the stuff we did I think but then he loved all of it. Even the museums.

It was cold though, very, very cold. And we were all wrapped up the entire time we were outside the hotel room. I think we had hot showers and baths nearly every night to warm up. But the entire trip was worth the cold, even if my wife and I were sick the entire time and it was so bitterly cold. My advice: don’t go in January. May or September, visit Dublin then.

So, what did we do in those three days? 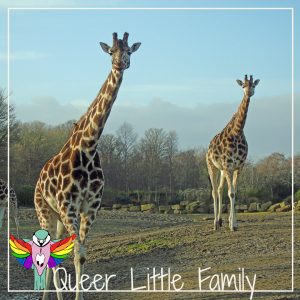 We went to Dublin Zoo on Friday. It was pretty easy to get to from our hotel in Liffey Valley, though a bit of a trek up the hill through the largest enclosed park in Europe. We stopped off to see the swans in the lake and got slightly overwhelmed by gulls and other birds. The zoo was awesome, though not enough reptiles for my liking. A lot of the animals are almost tame in some ways and definitely used to lots of humans wandering by their habitats. Becuase it was so cold many of the animals were inside, but still visible. Though mostly we could only see the elephants bums.

The Tigers were the best, and Snappy’s favourite. They came right up to the glass and showed off. The male’s tiger’s head was bigger than Snappy but he loved it. Wasn’t scared. It was just a really big Reb Brown as far as he was concerned. He liked the giraffes too, as they were reaching right over the fence around their enclosure (and people were – wrongly- feeding them leaves). He also liked the sea lions too. I liked the penguins because, well I love penguins. We took our own lunch and ate it around the park and had hot chocolates in the cafe. 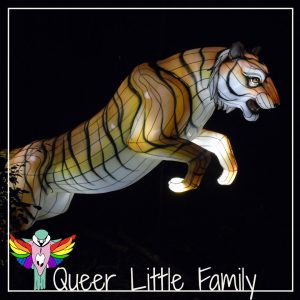 Wild Lights was also at the zoo. So after our daytime trip, we went back to the hotel to grab something to eat, warm up and change Snappy into his snowsuit to make sure he was warm enough to go out again. Then we headed all the way back to the zoo to see the lantern festival – Wild Lights. We’ve been to a lantern festival before – as part of last years Christmas present/trip but we weren’t sure how much Snappy would’ve remembered from that.  We couldn’t miss it though as we had been lucky enough to organise the trip for the last night.

We saw most of the lanterns during the day but it was nothing compared to seeing them lit up a night. They were stunning. Some were huge, some were pictures and there were a lot of animals. Everything from tigers to penguins. And Snappy learnt to say the word flamingo – though it came out more like’ mamingo‘. The `elephants were pretty impressive as well as the lantern in front of it that was made out of 1000 medical pots. 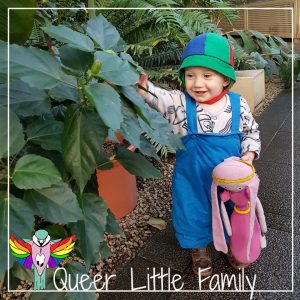 On Saturday after two treks around the zoo (and up the hill), we were pretty tired and needed a low key day. Plus Mel was the run director for her local Parkrun that morning too. So we needed a low-key day, so while she stood in the cold and watched people run (for fun?!) we headed into Dublin and found the Museum of Archeology. It was really interesting and free so that’s always good. They have a collection of items and skeletons that were found in bogs around Ireland. Snappy liked walking around, eating grapes and slapping his hands on the glass. Oh and spilling water everywhere. There’s no lift in the museum though, so my wife went upstairs to look at the medieval exhibitions (her speciality). While she did that, Snappy and I met Mel in the cafe for a brew and a snack.

We weren’t sure what to do next but when we realised that my mother-in-law would never forgive us if we didn’t go to the Botanic Gardens for the afternoon. And as Snappy was in the walking mood, it was a good option for him to run around and talk to himself and hit plants. He had a lot of fun and there were some gorgeous plants there. It was warm too and we spent a few hours there before heading back for dinner and more sleep. 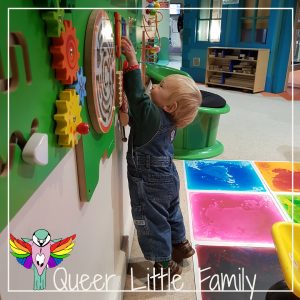 Imaginosity – as it’s also called – is a three-floor playground for kids. It’s awesome. You have to book ahead for your two hours slot but Snappy had so much fun. My friend Mel found out about it and bought the tickets. The first floor has a real Audi you can sit in and pretend to drive with a screen in front of you. There is a hospital with an x-ray machine (not real), a train set, a supermarket, a post office and diner. Snappy liked wandering around and ‘shopping’ with the little trolley. There are costumes you could put on but I couldn’t even convince my son to put a hard hat on.

Upstairs there were little houses, with foam brick walls you could pull apart. Sensory play, a floor full of gel that lit up when you stood on it. A crane that had seen better days (from kids swinging on it). There was also a little animation maker and a news studio and a couple of areas for under 12 months and under two.The third floor is actually outside and with it being winter it was closed but seeing as it was freezing I’m pretty sure this was the best choice. We had a quick snack in the cafe before heading back to the tram and back into Dublin. 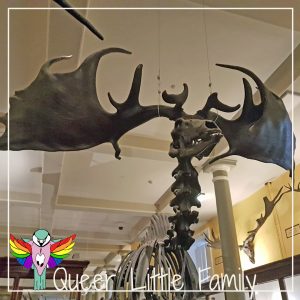 We wandered around St. Stephen’s Green Park for a little bit while Snappy napped and we waited for the museum to open at two (because it was a Sunday). We read about the parks history in the Easter Rising and my wife let some pigeons land on her and eat seed from her hand and Mel and I played Pokemon Go (I’ll get back to that). When it was time we walked down to the museum. Again there was free entrance and they had little books to fill in about the museum – a seasonal one and another general one- for kids to fill in. The Natural History Museum (also known as The Dead Zoo) is small but packs a lot in. Pretty much everything we saw at the zoo was in there as it’s a large collection of taxidermy and insect and butterfly collections from the 19th century.

Downstairs were all animals and insects and fish you would find in and around Ireland. There was everything from tiny insects you could barely see to a massive dear which is the first thing you see as you walk in. Upstairs (again, no lift, we left the pushchair downstairs with all the others) were animals from all over the world. Including s giraffe and an elephant. Some hamsters – including a skeleton of one that included its massive cheek pouches (which was awesome) and even some lion cubs that had died in Dublin zoo at just six days old. Before that, everything was cool and awesome and that sobered me a little but I think it’s a good learning experience for older kids and Snappy had a lot of fun (and a tantrum) while we were there.

Another thing we did while in Dublin (well me) was play a lot of Pokemon Go. Dublin has so many pokestops and gyms I couldn’t help myself. I don’t have as much opportunity to stock up like I did when in Dublin. I left Ireland with over 200 regular pokeballs and a whole host of new Pokemon as some new ones had been released. Mel plays too but I really took full advantage of the city before I came back to my tiny village of limited Pokemon going.

There’s so much to do in Dublin, and there are doughnut shops everywhere and street art tours and more stuff we didn’t get a chance to do. But hopefully, we’ll get to go again. When it’s warmer. Ignoring the hell that was the train trip home (the flights were easy) we had a great trip. I know Snappy might not remember this when he’s older but I will and as the years go by there will be more trips for him to experience and remember. 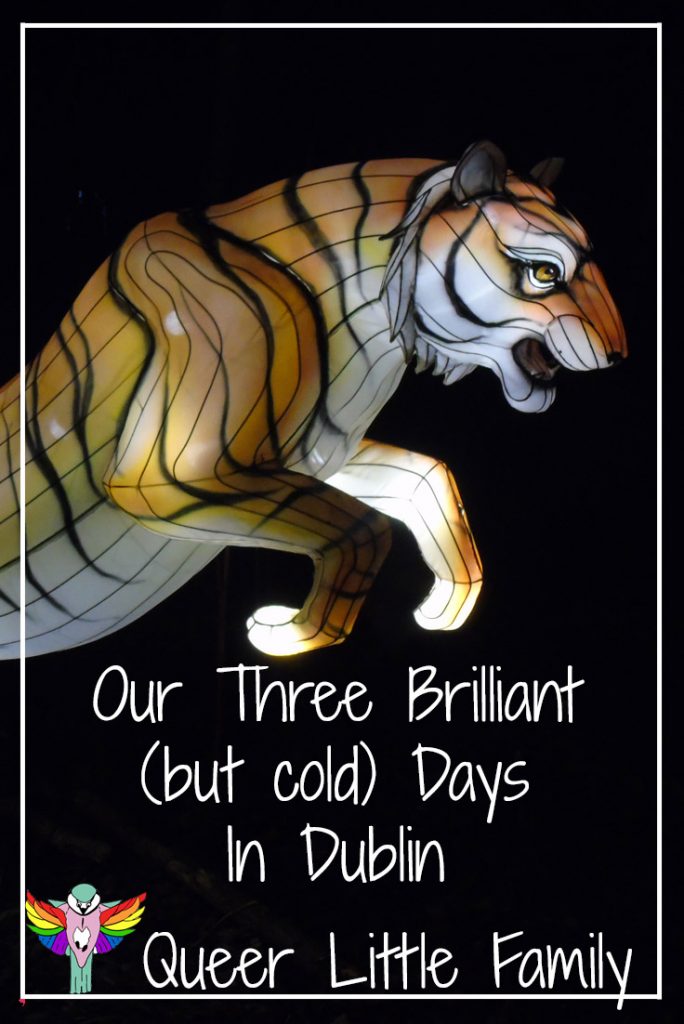 6 Replies to “Our Three Brilliant (but cold) Days In Dublin”