My anxiety is through the roof.

I generally live with low-level anxiety, every day I’m anxious. It’s become my natural state. I can’t even imagine feeling calm. If I’ve ever felt calm. This is my normal.

Except now my normal has ratched up a notch. I’m in a constant state of panic. It’s like I’m always experiencing a small panic attack. All the fucking time. The symptoms that would have me reaching for the Propranolol on occasion are slowly becoming the new normal. I can’t take that much medication as it tanks my blood pressure.

My choices are either panic attack or dizziness and fainting.

The idea of having to isolate caused me panic, to work from home with limited time out and about. I spent the first part of last week – just before lockdown – in the office. It was empty most of the time and that caused me more panic.

I’ve spent the last few days at home like everyone else, only going out once a day to walk my kid (trust me, he needs a walk a day), I’ve come to realise this is actually really nice.

Especially considering the last time I didn’t go out for six months.

That included my GP, appointments and psychiatrists appointments. The chemist for my medication.

Circumstance got me out of the house in the end. I pretty much tanked out of my college course (second one I’ve quit because of my mental health, not including two of my A-Levels) so I didn’t have any student loan coming in.

We couldn’t pay the bills without it so I needed to get a job. I signed up at a job agency for students and started working crappy warehouse jobs. I also finally got a therapist, so every Friday I would make the trip across the city to see her.

It wasn’t easy – I didn’t just go outside one day and problem solved. What actually happened was I started to suffer from psychosis and spent the next six months convinced magpies were out to get me among other things.

My anxiety didn’t really get any better years, and I’d settled at a nice standard of a constant level of anxiety. A more or less survivable, functioning level.

It started with the empty shelves

We haven’t done any hoarding, we didn’t go and buy everything we could. Partly because we felt that there was no need, people will calm down, they’ll be enough for everyone, we won’t be stopped from shopping entirely, we’ll be able to get stuff.

Plus, who can afford to go over their grocery budget, and transport all that stuff home when they’re on Universal Credit and have no car? Plus it wasn’t even in the county officially yet and I’d only just gone back to work full time when the restrictions started.

When I went to Lidl to get a couple of bits, our usual Wednesday fruit mostly and as soon as I walked in I could that the shop had been stripped. There was no bread, no tins, no pasta, rice, flour, sugar, toilet roll.

The sight of it made me cry on the spot, I managed to rein it in quickly before picking out what I could and getting the hell out of there. I cried when I got home.

When my kid couldn’t see me.

The idea of not being able to feed him is a very natural fear but there’s another layer to it I think. The sight of empty shelves causes a deep panic I’ve not been able to shake off for a couple of weeks now.

I can’t quite explain it and perhaps but it’s possibly a response to an unstable childhood.

I’m hoping this will settle, cause that’s all I really can do. I can’t take any more medication, I can’t just nip to see my GP (which, with their current appointment system as messed up as it is, I couldn’t do that beforehand either) access mental health services. All I can do is have my panic attacks, take my meds, and carry on.

Which isn’t much different from normal either. 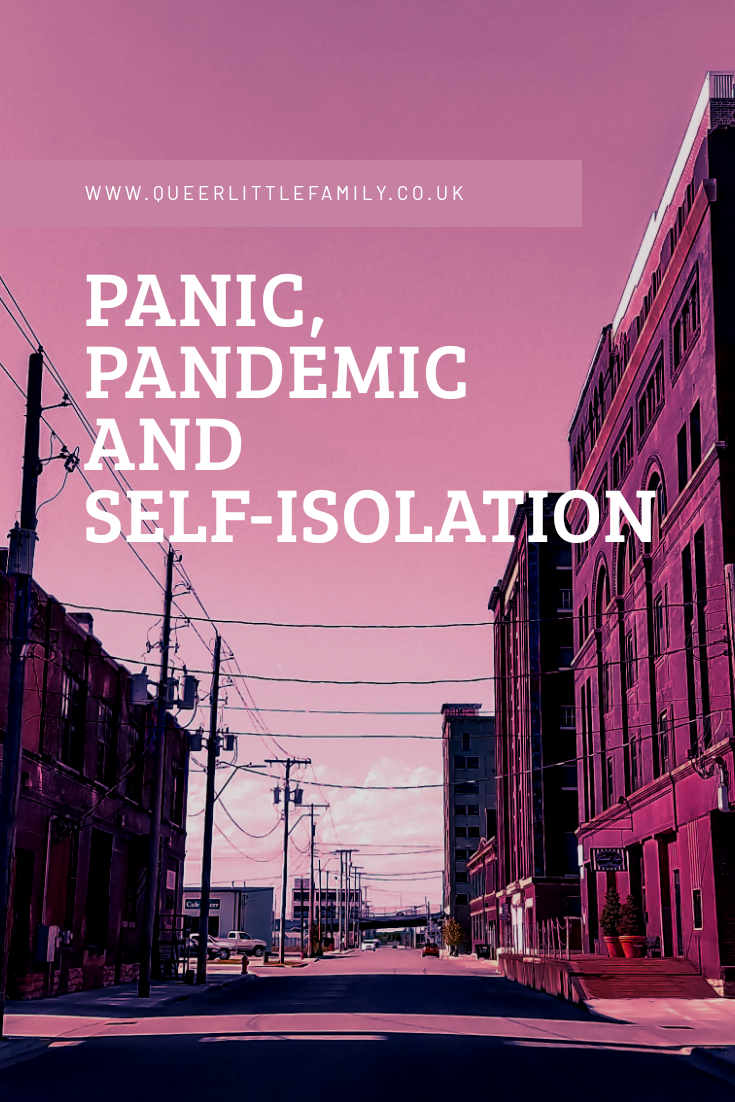