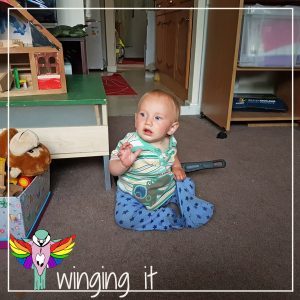 Proof of his bum in a frying pan.

My son got stuck in a frying pan today. Twice.

The the first time he got it out and managed to step into it. Then he got stuck and couldn’t get out of the pan. So I lifted him up the entire inch needed and back onto the floor. When he got his bum stuck in that was my fault. I picked him up and sat him in it. Then he was stuck but managed to pitch himself forward enough to get out.

He has two boxes of toys in the living room and a dollhouse. Mostly he just takes things out of the box, carry them around and leave them on the living room floor. Sometimes he puts things in the boxes. Like his cup.

Somehow he has managed to amass a collection for items that are definitely not toys. And of course, these are his favourite.

So last year I fractured two bones in my right ankle and injured some of the tendons in my foot. I then discovered that I had a long term problem with my arch in that foot. So I had to see a consultant at the fracture clinic and another in the Orthotics department. Both doctors gave me a shoe insert to wear to ease the pressure on my tendons.

The one the second doctor gave me hurt the fallen arch so I stopped wearing it.

Then my son found it and now he plays with it. 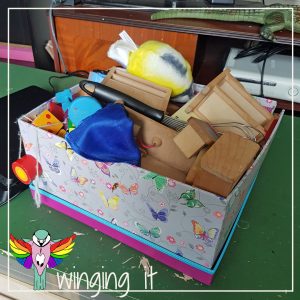 Toy box with the whisk.

To be fair, my wife gave him the whisk to play with. With both had whisks to play with in the bath when we were kids. Apparently, that’s either normal or we both had odd childhoods. I suspect the latter. We also had a big mug from when we went to see Disney On Ice when we were kids at the NEC (my mum had a mate at the ticket office). I used it to make milkshakes.

Snappy just carries his whisk around.

I woke up and found it in the bed one morning. Apparently, while I was asleep one morning he kept crawling through the house, back and forth between the living room to bring me things. Which is really sweet but meant I ended up with his whisk in the bed.

There is a lot of bits of word knocking around the house and garden. Bethend always has some sort of project on the go. Right now she’s building a chicken coop for the new house because the current one is too big to move. We also made a wendy house. All out of pallet wood. so now the lumps of wood holding the pallets together are now giant building blocks in the front garden. Well technically in my neighbours front garden.

Not only are these a great toy that makes a great noise when smashed against the floor, the baby barrier, podge mummy’s face…they often have great treats in them. Sometimes they have water for splashing and sometimes delicious cat biscuits. 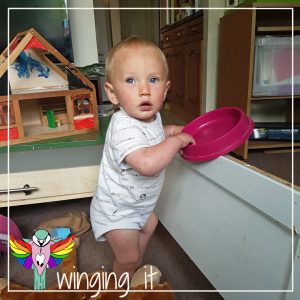 For the record, I have no idea where the remote control is.

Cats are definitely not toys. And while they do not reside on the toy box they are around a lot. At least one of them is. They don’t seem to have learnt that Snappy doesn’t quite understand the difference between ‘nice fuss‘ and ‘pull all the furs’. Snappy doesn’t seem to have learnt that cats don’t like ‘pull all the furs’ despite Mr Brown treating him like an unruly kitten: biting him on the head three times then swatting him.

The baby didn’t even notice he’d been bitten or swatted.

I don’t actually know where the rabbit skins came from. They are real rabbit skins from real rabbits; not our. We live in a rural area and people here go lamping all the time for rabbits and you can buy them at butchers. I’m not a big fan of the taste or the texture. However, we do have these rabbit skins for the cats to play with.

The kitten, in particular, loves them and has to pull them out of the toy box. Snappy just likes to carry them around. 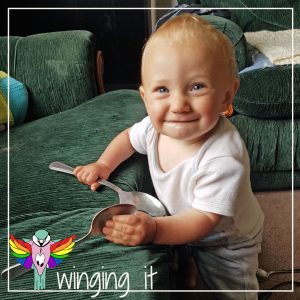 I has all your spoons.

In his cot and in his room and for some reason – for a while at least – in his toy box he had a size one nappy from when he was a tiny crocodile. He’s currently on size four nappies, but we have a few of these knocking about still. Apparently for him to play with. He likes to put them on his head. Or just carry them around. We use them sometimes to distract when he’s having his actual nappy changed so he doesn’t scream the place down.

This is a new one. I came home from work one day this week and found half my spoons in the living room. The other half were in the bathroom strangely. Bethend just lets him have them now, which is going to be a problem when we have soup for dinner. Snappy likes how noisy they are, and shiny I suppose too. He always has liked spoons. My grandad used to play the spoons my mum says, and I’ve been trying but it’s not a skill I’ve inherited.

I’m not sure how I feel about that. All I do know is that there are spoons everywhere.

So that’s it, the ‘toys’ my son plays with. He does have actual toys and there is probably stuff I haven’t mentioned too – like my phone but these are the weirder ones!