It’s July already – so here’s what we did in las month!

We started watching Brooklyn 99 again. Just cause it’s awesome. We haven’t finished Castle but it’s on hiatus in this house. I watched Terminator Genisys which is both confusing and a bit crap.I enjoyed it though. Snappy has been watching Shaun The Sheep and relaxing fish videos on youtube.

I read Underdogs by Geonn Cannon. I enjoyed it, it didn’t take long to read which is always good for me. I’m also back reading Dragon Age fanfiction – going through my bookmarks right now. The only thing I didn’t like was the name of main character. It bugged me and it’s actually putting me off reading the rest of the books. Bethend read a lot. Shades Of Grey by Jasper Fforde, Moby Dick, Wind In The Willows and Inspector Ghote Trusts The Heart by H.R.F Keating. We’ve been reading Enid Blyton to Snappy every night – stories from The Very Peculiar Cow and Other Stories.

Got me a PS4! So I’ve been playing Dragon Age: Inquisition because I love that game so much and I never got to play some of the DLCs cause they were next-gen only and not available on the 360. This time around I’m romancing Cassandra. It’s hard not to be romancing Josephine but I’ve done that twice now. Bethend is still playing Lost Kingdom. Snappy’s favourite game right now is to run off with my phone and kiss it. I think he’s kissing the hamster picture on the lock screen. He also likes banging things against other things.

It’s all about Lady Gaga this month. No particular reason but she’s pretty much the only person I’ve listened to this month. 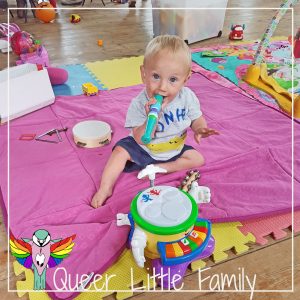 Went to see my neighbours school show. Bethend made a costume for Lily – she wanted to be a worm. Her cousins also go to the school and a lot of kids my wife knows from working at the holiday club.They had a summer concert and the bass was loud! It was funny and there are some really talented kids at this school. They did Shakespeare, won awards at the Urdd Eistedfood. I went to Playgroup last month too, I don’t go often cause of work. I love watching my bubby with the other kids and playing with the toys.

Not much to be honest – it’s been a busy month at work but I did write a little fanfiction.

We moved house! I will post about it. It’s been a work in progress for over a month. I took four days off work and we managed to get nearly everything done with the help of our friend, our neighbours, my stepdad and a bloke called Nick we found on Facebook. So grateful to all these people. I’m also making some changes to the blog – combining my other blog with this one, and making it the focus. Two blogs is too much and there is a lot of overlap anyway. So there’ll be a weird transition period as I reorganise everything.