So you may have heard; we moved house. We rent and our old landlord was selling up (good luck with that, cause nothing is selling in this village right now), and we found a house in the next street about a week after freaking the hell out about having to move (cause money, baby, so many animals, etc). Luckily though we have great friends and had six weeks notice and we didn’t have to leave the village. The Gods of moving smiled on us.

So, my wife packed the house up while I worked overtime all month and then took four days off to move the furniture with the help of a man and a van, my neighbour Al and my step-dad.

This was the most difficult move ever in terms of practically (rather than emotionally). And I’ve moved over 140 miles across the country. Thrice.

So here are my tips for moving house:

1. Folding Is For Losers

Seriously, why bother. If you’re travelling four miles or forty, shove those clothes into those boxes and whatever suitcases you’ve got handy until you need to sit on them or tape them up to close them. By the time you get wherever you’re going some of that stuff is going to be sitting in boxes for ages. Trust me. All my clothes are in a heap in the suitcase they were brought them over in. My cat Merry has been sleeping on them. And it’s not like my clothes were folded in the drawers.

My wife’s are though. I didn’t fold her clothes either

I prefer not fold but I will iron when needed to but mostly my drawers are ‘encouraged’ to shut with a foot.

The dust will get you. It’s coming for you. From behind the wardrobe, under the bed, on your cats…wait what? No really, every time I looked around I saw Stink covered in dust or cobwebs. He’s a black cat so it was really obvious.

I happen to have allergies to dust anyway. And pollen. And a few other things that reduce me to sneezing and itching and swallowing antihistamines like sweets (which I do not recommend). Packing up a house you’ve been living in for nearly five years and have an attic full of stuff (and more spiders) dust is inevitable.

Behind the bookshelves were a disturbing amount of cobwebs. They were pretty much the set up in the living room from the moment we moved into the old house. I thought something had happened, like it was a big stain but no, just needed a good dusting.

3. Totally Leave Everything To The Last Minute.

As an adult, I’ve moved eight times. Some places I’ve only stayed at for six months, others for years. However, my packing mantra comes from when I was a teenager and spent my school holidays in Coventry with my dad. I would pack the night before. Sometimes the morning of the trip. Even if it was for the six week summer holidays. There was a lot of reluctance there but after a while, it just became the norm. When I left to go to university I packed the day before.

So yeah, leave everything to last minute. It’s the way forward.

4. Get Everything Moved And Sort The Mess Out Later.

Seriously, as long as it’s in the right house then that’s all that matters. Just get it there and then sort it out. I mean, it’s impossible to organise an entire house and move it. And tiring and pointless to try. So I deal with one problem at a time. Pack. Move. Unpack.

Tea is actually my advice for most things. For life in general.

Serious what’s the worst that’s gonna happen. Some stuff gets left behind? It’s just stuff. Okay, so I’ve only moved a street away this time, but once I left my ex-boyfriend knowing I would not be able to go back and get anything I forgot. But I did and I did leave stuff behind but it’s just stuff. Stuff can be replaced.

When we moved into the village five years ago a lamp was broken. Bethend was upset about it, but there are more lamps out. Even ones with bees on them. Moving is stressful enough without over-worrying about everything.

Something things are important. The animals. The baby. Pants.

The rest is replaceable.

7. You Don’t Have To Move Your Spiders. Your New House Will Come With Spiders Already Installed.

Why are you packing your spiders weirdo? your house will have spiders. Trust me. My new house came with a variety of spiders. And that variety was alive and dead. Cats won’t eat spiders they haven’t killed.

I didn’t want to find out if babies would…

8. Remember Your Cutlery As Well As Your Food. Fingers Do Not Make Good Butter Knives.

We packed up the kitchen last. And bethend packed up all the food and brought it all over to the new house via a wheelbarrow (we moved a lot of stuff in that wheelbarrow). And then while she was making some for breakfast for herself (I rarely eat breakfast and Snappy eats with his fingers) she realised that we didn’t have any knives. Which makes spreading delicious jam somewhat difficult.

So, no, fingers do not make good butter knives.

9. Don’t Pack All Your Clothes. You Will Need Pants.

This one really speaks for itself.

We set down a rug and arranged a lot of furniture around it, put some toy boxes in and then added a baby. He was less than impressed but then he’s been a clingy bubby again lately (probably all the change). It was vital though because the house was pretty much a disaster zone for the first couple of days before we could downgrade it to a bloody mess. Right now I would say we’re on disorganised. But then I’ve gone back to work and Snappy is still clingy. 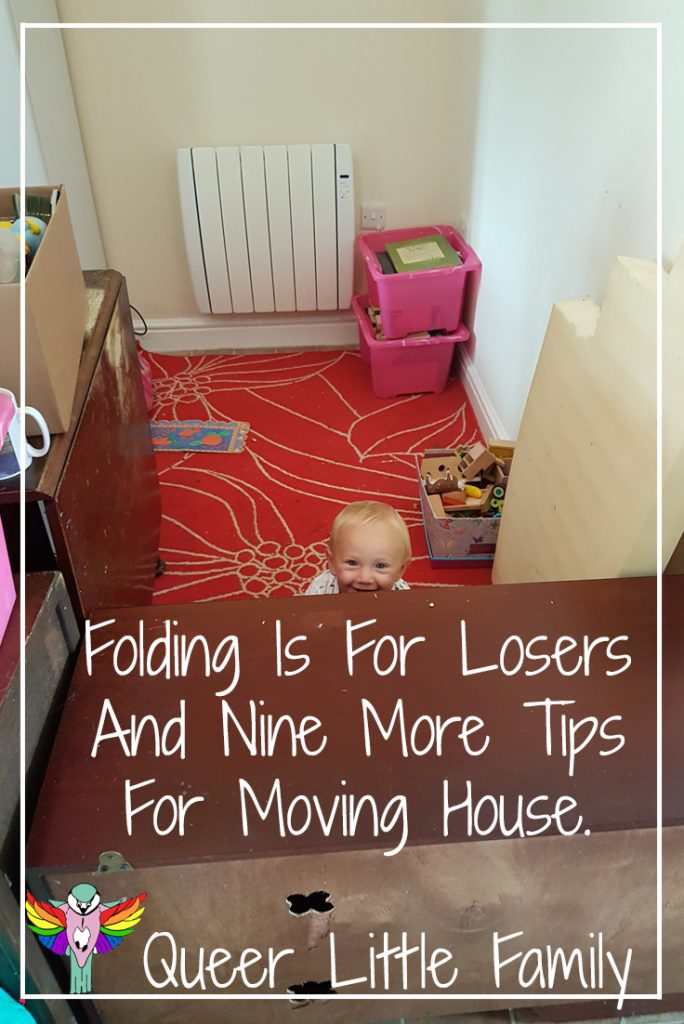 3 Replies to “Folding Is For Losers And Nine More Tips For Moving House.”