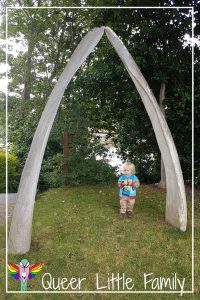 So a couple of weeks ago I had a week off work. Mostly just to recharge from work  – I tend to take my holidays after my colleague goes on holiday cause the week he is off is usually hell. Sometimes he takes the week off after I have my week off for the same reasons.

We didn’t go anywhere on holiday, and typically it was the week in the middle of this heatwave where it rained (but yay, rain) and I was ill on and off all week but did go out to Cardigan for the day. I haven’t spent much time in Cardigan since I was a kid (and not much even then). It’s a long bus journey from where we are, and I totally threw up on the bus (I did say I was ill), but SnapPy had a nap, and bethend read a book and we got there mostly in one piece.

I need to learn to drive.

We got there and had some lunch. We had lunch in this cafe that then had a slightly posher restaurant on top called. It was nice in the cafe, but the music in the restaurant was sooooo loud. One family was up there sitting in silence probably cause they couldn’t hear each other. I only went up to change Snappy thankfully. 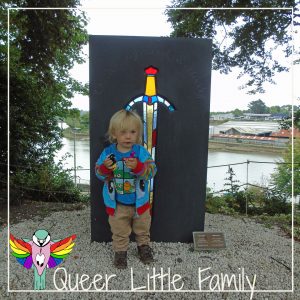 We mostly went down to go see Cardigan Castle, which is a manor house with some of the original castle still on site, a WW2 post and has a huge garden. It fell into serious disrepair over the seventies and eighties to the point where the owner was living in a caravan on site because the house was unlivable after all those years. The community took it over and raised money and grants to repair it and turn it into a visitors site.

This is all very recent and I hadn’t been down to see it since they finished it.

They host a lot of events there now, but we went down just to look around. Snappy was really good and let me take pictures of him in front of things and even looked at me. They have exhibitions about the area, the history of the castle and the manor house, and about how the community effectively saved it from development. They also have a working kitchen garden which I think bethend enjoyed the most. And Snappy because he liked running around the place.

It was only a fiver each, so I would say definitely worth a look around and supporting the castle. 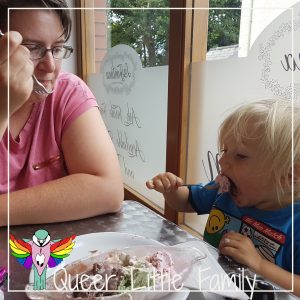 When we were done at the castle, we wander down the high street and looked in more shops. And by shops, I mean charity shops. Cause we love charity shops. Bethend had already checked out Banardos when Snappy needed a walk while waiting for lunch (he was tired and hungry and getting worked up). We’d also already been in this cool shop that sold dollhouse stuff and other bits and bobs. So many tiny things. Bethend is big on dollhouses and bought a few things from there but it was all a bit expensive. Snappy wanted a Mini toy car that cost like a fiver but luckily we had an emergency car with us.

When we got to the end of the street we found an ice cream parlour and shared a banana split between us. Snappy’s getting quite excited about ice cream and he loves bananas. We all got to pick a flavour too. We managed to convince him to use a spoon but he also just grabbed at it with his hand.

When we were done we caught the bus home again. I managed not to throw up (it was close for a while), Snappy did not sleep but that was fine because by time we got home there was time for a small dinner before bed.

So a short day all in all. There is more do to in Cardigan, but being a little limited by the bus we only had a few hours there. Hopefully, when Snappy’s grandparents come to stay we can go down there in a car and do more.

5 Replies to “A Day Out In Cardigan”