The heatwave is over. Maybe. Either way, the rain is definitely here which I’m glad for. The fields are brown and the ducks were paddling instead of swimming. It’s much-needed rain. We’ve had a stupidly busy month which is never a bad thing but I doubt August will be much calmer, to be honest.

Anway, here’s what we did in July.

Bethend has read or is reading –  House Of Treason by Robert Hutchinson, Surgeon of Crowthorne by Simon Winchester, Rebecca by Dame Daphne du Maurier,  Longitude by Dava Sobel. With Snappy we’ve been reading Mr Men books still, Fox In Socks (every bloody night), Paddington At Large by Micheal Bond, The Tower In Ho-Ho Woods by Enid Blyton and Harry and The Dinosaurs. There’s probably more; we go through a lot of books. I’ve been reading fanfiction and The Circle by Dave Eggers.

We’re done with Season Six of MST3K. We’re on Season Seven now, watching them in order (well, the particular seasons in order). We finished season ten of RuPaul and are keeping up to date with The Last Leg. We haven’t watched much else, to be honest. Snappy has a new Shaun The Sheep DVD that we watched, his usual favourite The Music Man and has started watching Thunderbirds.

I played a bit of Rollercoaster Tycoon and some Age of Empires 2 HD. We played AoE together but we can rarely beat the other because we’re both defensive players. I restarted Dragon Age Inquisition cause I wasn’t enjoying playing the warrior class. I’m planning to play DA: Origins and DA2 once I get my Xbox 360 set up again.

I’ve started writing some fanfiction again, I’m not ashamed of it and as I’ve said before, it makes me feel better. It’s comforting. I’ve of course kept on top of the blog – feel free to nominate QLF for the BiBs by the way. We were recently showcased by Vuelio.com and are one of their top ten LGBTQ bloggers (top four in fact). 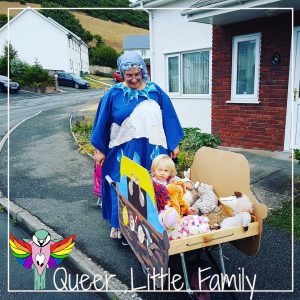 We went to cardigan for a day out (which I still have to write about), and have been hitting the beach pretty regularly. We also went to Birmingham yesterday to see Bianca Del Rio’s show. We also had the village carnival though it almost nearly didn’t happen as the rain and wind were pretty bad when they were setting up. Snappy went as Noah with his ark and came third in the 0-3 competition. He was told by a few old ladies that he was robbed.

And we celebrated our six year anniversary, I came off my meds and I got a new job (more on that later). 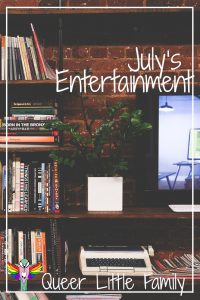 One Reply to “July’s Entertainment”