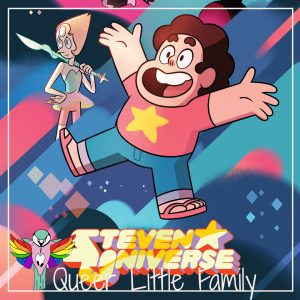 Until just recently, no one amongst the viewer-ship had mentioned the LGBT aspects of Steven Universe. Maybe, this is because on the show itself no one has pointed out certain things that are very LGBT – i.e the character Garnet is in herself a same-sex relationship – not in a relationship but the literal, physical result of one. In the show two gems (aliens that take the form of female humanoids) can “fuse” themselves together, giving up their individual identity to create a new, unique person. When it is revealed that Garnet is a relationship, nothing is made of the fact that she is a same-sex relationship. The sexuality or gender of her characters isn’t what makes her who she is, the relationship is – regardless of the sexuality and gender of the characters that make her up. Steven, the title character, doesn’t care, no one makes a note of it, no one is surprised or has slightly inappropriate questions to ask. It is just something that exists and we wouldn’t even know if it weren’t for the fact that Ruby and Sapphire, the gems that makeup Garnet, were forcibly separated at the end of the first season. After 50 episodes.

Reunited after escaping captivity with Steven’s help, they kiss, they fuse, they’re Garnet again. And Steven’s surprise is more about the fact he has known Garnet all his life without knowing she’s made up of separate gems. His young age (roughly ten years old) and the gems’ “alien-ness” give the writers a certain freedom – he’s too innocent to realize questions could be asked and he’s known them all his life – this is his normal and it’s not heteronormal. This is the same for the Gems too – it’s too normal to be commented on. Once you’re aware of this aspect of Garnet’s character there are a couple (make that a lot) of clues early on the 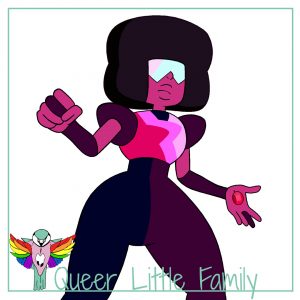 season, if you’re paying attention or re-watching it for the purpose of writing a blog post. Knowing this really enhances Garnet’s character and you start to look at her relationship with Steven in a new way – he too is a fusion of sorts between a gem and a human.

It adds layers and layers to the show and the relationships between the characters, showing that LGBT characters are just as complex as straight characters, often in ways that have nothing to do with their sexuality.

People say the producer, Ian Jones-Quarterly, didn’t need to confirm anything about the nature of their relationship. I personally don’t have an opinion on that either way because my focus is on the show itself and whether it’s talked about on the show.

Being Queer Is Normal 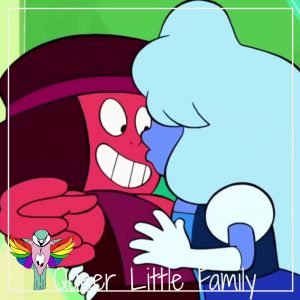 I really like the fact that no one makes a big deal of this. That it’s normal because when it comes down to it – that’s what I want. I want same-sex relationships like mine to be normal and not to become that couple everyone talks about. I want to be the couple that doesn’t mow their lawn and keeps those noisy chickens over those lesbians with all those cats (who don’t mow their lawn). I think that’s the important thing here, the normality of their gender – their same sex – in the middle of a world that is definitely not normal. That’s what I want as a person in a same-sex relationship (regardless of my own sexuality).

There are a few other things that are not as obvious as Sapphire and Ruby’s relationship. Which by the time I had caught up with everything, was pretty small. Just a quick kiss and an explanation – a reminder later on that Garnet can’t have a relationship with the postman because she is a relationship. It’s all very brief and even that is fine but there are some things that aren’t even pointed out like this.

One is Pearl’s affection for and obsession with Rose Quartz, Steven’s late mother. Whatever she may feel, you can’t deny it’s something deep for Pearl, and the problem was never that Rose may have been straight but that Rose wasn’t interested. After all, they’re thousands of years old and nothing romantic happened between them in all that time. I’d just like to point out though, they are both gems and aliens, after all, their perceptions of gender and sexuality could be very different to ours and, well, that’s maybe getting too deep into the way creator Rachel Sugar has put this world together. Pearl’s interest in Rose is no different to Rose’s relationship with the human Greg, which would ultimately result in young Steven. What’s odd about it all is that they’re a gem and a man – alien and human. The relationships that are effectively straight are the odd relationships when you really think about it. Rose always treated her relationship with Greg as somewhat as a novelty, and Amethyst’s interest in Greg is complicated not because of gender but because of his relationship with Rose and Amethyst’s relationship with Rose.

Not that Pearl’s love for Rose Quartz seems healthy either, but it’s not the gender or sexuality that makes it odd. That’s my point. Amethyst too has an unhealthy interest in Greg. For everything that’s going on in the show Garnet’s relationship is the most stable – it’s why she’s able to fuse and remain a fusion for so long. 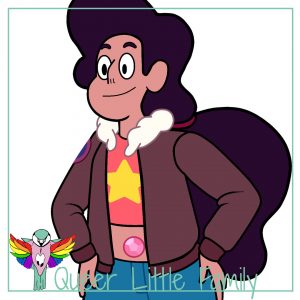 Another episode that deals with gender and sexuality without actually addressing it (or pointing it out) is when Steven and his human friend Connie fuse for the first time. Their fusion, Stevonnie, is female. No one makes a big deal over this, or even points it out. Steven doesn’t get all bothered or emasculated by the fact that he fuses into a girl, or that he flirts and dances with another boy. Steven loves the fact that he can fuse with his best friend. There is no gender binary or sexuality binary in the episode. Both genders are attracted to Stevonnie, and Stevonnie is interested in both genders in turn.

Later, when they fuse accidentally while listening to music with his father, Greg’s concern is that they fused, a human and a half-gem, not that they fused into a girl. The gems have the same reaction, not knowing that Steven could manage to fuse all, let alone with a human.

It’s the fact that the gender and sexuality of the characters aren’t a big thing, that it barely registers for the characters if at all that makes Steven Universe so special. It’s very inclusive without pointing it out. Garnet is different to Amethyst who’s different to Pearl who’s different to Steven because of their personalities, because of who they are and their gender and sexuality is a part of that and not the sole reason for that. I’m sure it’s not perfect, I mean, I might be looking at this through rose-tinted glasses since I saw Sapphire and Ruby but it’s hard not to when so much media that is purposely aimed at the LGBT audience are romantic dramas and some of us really can’t stand that. I want sci-fi, I want cartoons, I want cop dramas with LGBT characters and slowly, bit by bit, it’s becoming more common.

In Steven Universe though it’s the first time it’s truly been part of the everyday. Not a big character arc where someone discovers they’re gay, but just another facet of that character’s life. That’s really all I want in life – because that’s me. That’s us. Hopefully watching this show will help kids realise that too.