That Bloody Duck And Other Things I Trip Over 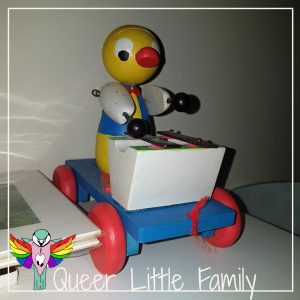 I’ve always been a pretty clumsy person. I was the clumsy one growing up, tripping up, falling over walking into things. That was my thing. I’m still clumsy and I married another clumsy person. Bethend is actually clumsier than I am and you’d think we’d be ready and make our house as safe as possible for ourselves.

We don’t have so much stuff we need to be on an episode of a reality tv show about people with mental illness that have them hoarding stuff. We just have cats. And a toddler. And a lot of books.

So maybe a different reality show about people with mental health problems that trip over a lot? Who knows, all I know is toddler-wrangling should be an Olympic sport, and my house is some sort of obstacle course. So here her some of the obstacles I face every day.

There are actually two ducks in the house that I trip over regularly. Both are pull-along ducks, one with wings that move and another that plays the drums. They’re always in different places and if it wasn’t for the fact that I’ve seen Snappy move them around the room I’d swear they were moving around by themselves. Especially when I know I’ve moved them to one side and then trip over them when I get up in the night.

Not every night, but often enough that it’s a running joke in the house. It’s usually me too, rarely my wife. I’m not sure why or how but if I need to pee in the night I need to be aware of where I’m stepping cause there could be a duck lurking, just waiting to trip me up!

Toast doesn’t sound dangerous, or even a trip hazard and on its own, it’s not. It’s harmless and delicious. At least not when it’s sitting on a plate waiting to be eaten. However, at least 50% of the toast Snappy gets ends up on the floor before being eaten by cats or Snappy*. While normally I wouldn’t trip over something as small as a quarter of a slice of toasted bread I do trip while trying to avoid said pieces of toasted bread.

At the moment he’s hiding his toast and I’m trying to pick it up as it is dropped but it’s not always possible to get every piece. Even with five starving* cats.

This is one that has been plaguing me since I was a kid and is the scourge of parents everywhere. If you’ve got lego in the house you’ve stepped on some lego. It hurts, a lot, depending on the size of the brick of course. Being a Lego geek both as a child and an adult, I’ve stepped on more than a few. And kneeled on a few too – that really hurts too by the way. As with the toast I do most of my tripping trying to avoid stepping on lego bricks or I trip over trying to get around piles of bricks and half-built projects I’m in the middle of. 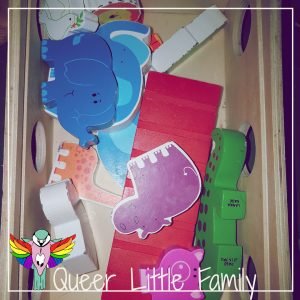 A small selection of the wooden animals.

My son has an extensive farm – we call it Old McHomer’s farm because it’s presided over by a toy of Homer Simpson in his MuMu. It’s a mix of various plastic animals we’ve found in charity shops and been given as presents. Including several dinosaurs and some large snakes.

It’s not a very productive farm.

It is a dangerous one. He also has a wooden Ark, complete with Noah, Mrs Noah and more wooden animals than you can fit onto a real boat let alone his small wooden ark.

The animals get everywhere. Snappy loves them, walks around with them, torments the cats with them. Has us tell him what they are and make the noises.

Then drops them in different place around the living room. I end up tripping over the dinner-saurus rex or cow-spoon or stubbing my toe on a dodo, kicking a wooden giraffe.

One entire side of my wall is lined with four completely full bookshelves. Snappy can reach the bottom two shelves and does so regularly. At first, it was just random, he pulled books off the shelves as soon as he was big enough to do so. It’s hard to discipline a baby and harder to stop a toddler on a mission.

Especially when that mission is to find a book, any book, with a penguin on it. He goes through every book he can reach until he finds one that’s been published by Penguin Books and then shows us or walks around with it for a bit.

Then he drops then wherever he happens to be standing like everything else and moves onto the next toddler activity.

And later I come along and trip over said books.

Are you sensing a theme here? I am.

This isn’t the fault of my son – this is my own fault for having so many bloody cats. As it is, I have five, three lumps, a neurotic furball and a Hollywood cat. I trip over all of them at different times, Kitten (my Hollywood cat) and Merry (the ball of neurosis) often dart in front of me. The other three are often ‘lumping’ in awkward places. Like on a stair. Or right behind you. Reb in particular – who weighs about six kilos – will either step in front of you, or lie down in front of you or magically just appear.

I’m not sure how he manages it, because, well, he’s so slow. Mentally and physically. But suddenly he will be there and you will be flat on your bum on the kitchen floor. 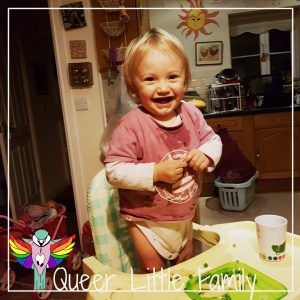 He’s so cute he gets away with so much.

I manage to trip over Snappy at least once or twice a day. More on weekends and on days off. He’s very similar to the cats in that he will just walk in front of you or behind you or appear suddenly in the way.

Then we’re both on our ‘pen-ôls’ (welsh for bum) and one of us is crying. And that one isn’t always the toddler… He trips up a lot too, but he’s supposed to, he’s eighteen-months-old. I’m thirty-five and clumsy.

I also trip over my own feet, more toys that include a push and sit-on car, his bike and cuddly toys. I also trip over quilts I’ve left on the floor, pools of water (created by Snappy), and nothing at all.

I figured when I was a kid I would grow out of it. Don’t suppose there’s much chance of that now…

*disclaimer – my floor is clean and germs are good for kids. My cats are not actually starving. 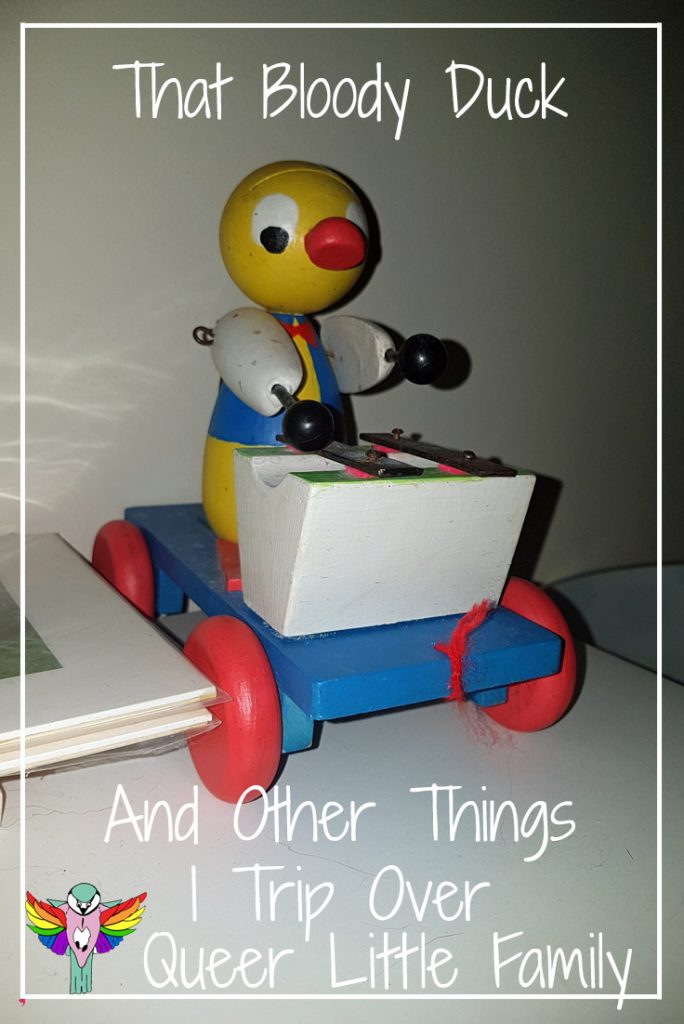