Snappy has, like everyone, a few different ways to communicate. Like all babies has developed a few different cries over the past five months that he seems to be sticking with. He also has a few great laughs and other noises that he’s developing but today we’re going to talking about the crying.

He actually doesn’t cry much. He’s a pretty happy little guy, even when he’s nose it snotty and he’s coughing he just smiles through it. Loud noises, the cats in his face, being manhandled by his cousins; he takes it all in his stride. He cries mostly when he’s tired, too tired.

Which is where we get the grumble from mostly. It isn’t really crying per se, more the beginning of it unless he gets to sleep. If he’s overtired then he will grumble until he falls to sleep. Sometimes he will also grumble in his sleep. He can really go for it,  grumbling to himself for a good long while. I tend to leave him to it because it means he’s more annoyed than anything else. If he were really upset he’d let us know.

The fake-out is either nothing or the building up to something. It’s not always clear. Sometimes he sounds like he’s really going to go for but most of the time he gives three of these cries and then settles back down. Sometimes it’s to tell us his Peebles is out of reach or something isn’t right with his blankets.

This one I only hear a few times, now and then. It’s the one single cry in the middle of the night he makes to wake my wife for a feed. He tends to wake once or twice in the night for a feed at the moment and I don’t always hear it. I think it’s mostly because it’s a single noise and well, I can and have slept through having a fairground outside. Bethend has always been a light sleeper and wakes up instantly whenever Snappy needs her.

Never Going To Get Fed Eva!

He tends to get a little impatient when it comes to his feeding time. If my bethend doesn’t respond quick enough to him, or has a few layers on, he can get a little worked up when she’s undoing the buttons on. He combines a grumble and a wail with some flailing too if it takes a really long time (and for a baby, everything is a long time).

The cry he makes when he’s not moving is pretty distinct. When he’s in his pushchair he wants to be moving. Even on the bus. Doubly so when we’re on the bus – as we leave Aberystwyth we tend to stop and start as we hit the all the bus stops on the way out and he gets really upset until we get onto the coast road and really get going. He’s usually asleep before he hit the next village.

The Baby On The Edge

This is classic baby crying cause baby is really un-bloody-happy so you better do something about it now mummies. This garners an immediate reaction from both of us, picking him up to comfort him for a little while. It comes along with teething, vaccinations and bumps on the head. It also comes along with waking up without his Peebles doll. 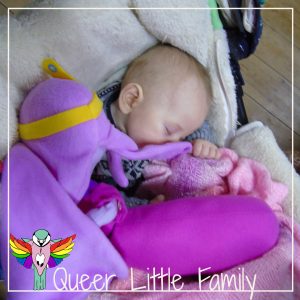 I thought Baby on the edge was the worse thing ever but the heartbreaking baby cry is, well, heartbreaking and only happened once. This week actually. He had gotten some nappy rash at the beginning of the week; his bum was very, very red and it came on quite suddenly between nappy changes (or it seemed to, I changed one of his nappies in the mostly dark of the room). When I cleaned him with a baby wipe, it really must’ve hurt because he screamed and screamed and screamed until I was able to pick him up after I put a clean nappy on him. It was awful and in the end, we gave him a little paracetamol. He’s fine now like it never happened, but I am never going to forget that sound.

Like I said, he’s a pretty happy guy. His teething comes and goes and recently it’s been pretty good. He sleeps well and only gets upset when he’s overtired or when I’m home late from work (usually only on a Tuesday). Apparently, I have until 6.04pm to get home before he gets upset. I’m sure it will all change again as he grows and learns more communication. Perhaps we’ll revisit this again in another few months! 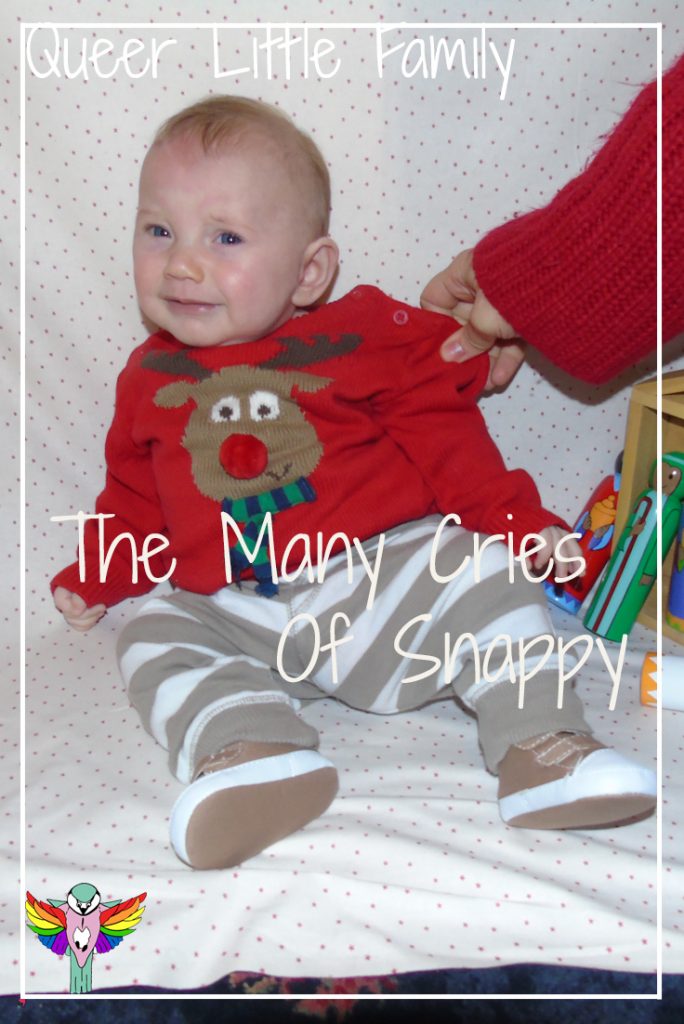 9 Replies to “The Many Cries Of Snappy”