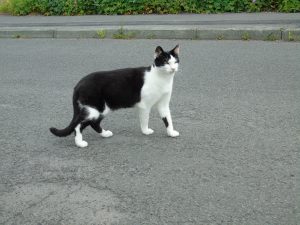 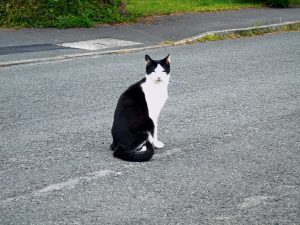 We call this guy ‘The Ratter’ for obvious reasons – we’ve seen him quite a few times pottering around the village with a rat in his mouth. Looking really pleased with himself. His real name is Scooby but I quite like calling him the Ratter. I first spotted him on our fence in the back garden, and only there for few times actually. I thought he was after the chickens at first but I now I think about it he was probably after the rats in our and the neighbours garden.

He’s never gone after the chickens. None of the village cats have.

He’s a very sweet cat. He will throw himself on the floor for a fuss, and let my neighbours little boy stroke him too (though he ran away from their five year old). He’s hefty too. He looks sleek and svelte but when you pick him up he is heavy. Heaver than my cat Mr. Brown who is five and half KGS (and has actually lost weight). It’s all muscle. Solid cat muscle.

I often see him now just chilling in the road (a bit like Molly) or scratching his back on the gravel of my neighbours drive across the street. He’s definitely one of the friendliest cats on the estate. But he has little to fear, so why would he worry about us puny humans?!