Snappy is officially sleeping in his big bed. And it really is a bit bed. My little croc is a little kid, genetics and well, he started off little, so being in a single bed really emphasises it.

It’s going well so far. The bed frame is actually my nephew’s old bed (he’s fifteen now an definitely outgrown it). I forget where the mattress is from. We’ve had it for a little while because my niece and nephew stay over a lot (well, my nephew less so nowadays), and it was actually Poppy’s bed in Poppy’s room. Since the move, this means she’s moving rooms too but we’ll make the spare room nice for her and even move the chicks that are currently living in there.

We never intended to move him into his bed quite so soon, we were working up to it in fact. Bethend started putting him down for his naps in his bed, and he did well. We expected him to immediately get out of bed when we left him to cry at the door (we close the door for naps and bedtime to stop cats getting in). However, he cries a little (not every day) and then goes asleep cause deep down in his toddler brain he knows he’s tired.

When he wakes up he either cries for us or sits on his bed and talks to himself, his friends or reads a book. 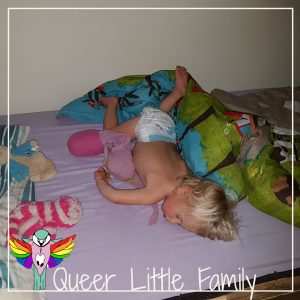 The first time he slept in a bed was actually at my aunt’s. He fell asleep in the bed and was pretty settled so she took him for the night instead of driving him back to ours. He was fine, had some pillows to make a makeshift bumper and woke up at his usual time.

The first time he slept in his bed at home was accidental. I was at my writing group and bethend could only get him to settle by lying with him in the bed. He finally fell to sleep there and we decided to leave him instead of trying ot move him and risk waking him.

The next morning he got up and come running into our room very happy to be able to do so, so we just kinda went with it. We weren’t ready. We had a duvet set my mum got him but no actual single duvet. My mum got him one of those as well eventually. For the first week, he was sleeping with a double duvet – this was before the heatwave.

I love hearing him come running into the room (unless it’s 5 am). Some days if we’re burrowed under the quilt he says ‘mummy hiding‘. Which is probably the case on the odd day he gets up too early. Mostly he gets up around seven/half seven.

He’s been the same to get to sleep as he was when he was in the cot, better actually I think. And he doesn’t actually get out of bed when he’s upset or doesn’t want to sleep.

Two Steps Forward, One Step Back

As with most things when it comes to toddlers (and life if I’m honest), we were doing really well and then he fell out of bed. Okay, so it wasn’t a big issue. He didn’t hurt himself, he doesn’t have a bedside table or anything by his bed right now. He spent the rest of the night in bed with us and the next night went to bed as normal.

With a new bumper.

Bethend made it out of some wood we have and an old skirt. Works well considering how much he moves around in his sleep.

The real problem is the over the last couple of days he’s not been getting out of bed to come and find us. He just sits in bed yelling for us and saying ‘eisiau mynd lawer‘ – want to go down (stairs). I don’t know why he’s been like this, or why he doesn’t want to come into our room. It’s annoying cause it means getting up as soon as he’s awake, rather than let him play in our room with the toys and books we have in there.

It could all change again in another few days though, and it all went much easier than I had anticipated. 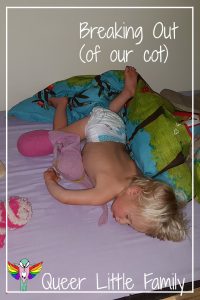 6 Replies to “Breaking Out (Of Our Cot)”