People often ask me how many tattoos I have and at the current count (as of 09/06/18) I have…a lot. Twenty-two. Though at some point my leg will be one big tattoo; do I count it as one? Is it lots a little ones with a background? Does anyone care?

Anyway, here are all my tattoos, their stories (should they have one) and why I get them.

Couple of quick notes – Some of these pics are the old pics. Some are new. It’s obviously image-heavy. You can also see some of my self-harm scars.

I got my first tattoo at nineteen. I still had a huge phobia of needles back then but I liked next door to the coolest person I’d ever met and she had tons of tattoos. I wanted to be cool too, and I wanted a tattoo. But, much like for my Meningitis Vaccination, I had to be ‘escorted’ to the tattoo parlour. I still almost did a runner even after I picked out a design; a little sun that I wanted to be coloured in yellow.

I don’t regret it. Not the tattoo itself or the fact that I had to be heavily convinced to get it done. I don’t remember it hurting that much, to be honest, and at this point, I had already started to self-harm off and on, so how much different want it really. When my mum saw it after picking my sister up after she’d stayed with me for a week she tried to give it a ‘mum wash’. She licked her thumb and tried to wipe it off. I still laugh thinking about it.

I’m a little fuzzy on the timeline of the next three. I’m pretty sure I got the four stars on my wrist second. I am often asked why I didn’t alternate the stars so I could wrap them around my wrist but I never wanted something like that. The two purple stars flanking the blue stars represent family to me. My sister and I loved and protected by two people – my cousins, my aunts, my mum and stepparent.

I got the black sun because it felt like a good representation of my life with depression at that point. I got it half filled in at a later date. The star and rainbow on my shoulder blade I got around the same time. I was definitely aware of my queerness at this point, I’ve always liked stars, I liked this design so why not. Like was pretty bleak at that point, and mostly I remember having not eaten before the tattoo and almost passing out while getting it.

I always hit up a Mars bar before a tattoo now.

The Heart and The Poppy

Just before I moved back to Wales, and not long after, I got a tattoo for my nephew and one for my niece. The balloon heart I designed myself -a nod to a poem I wrote about my nephew. He was an still is my world. Even if he’s fifteen and a pain in the arse. After my niece was born I found the poppy online and got that done on the other wrist. The inside of the wrists hurt a lot.

The skin is really thin over the veins and so the tip of the poppy hurt a lot more than the rest. All of the heart hurt. I consider getting it touched up sometimes because it didn’t heal well.

Around the same time, actually, possibly before I got my poppy done I went to the dodgy parlour at the bottom of the hill in Aberystwyth. This was just before my current tattooist had opened up, and I didn’t know any better. Or have many options really. I got these two done at the same time. The pride flag is only in half the sun because I’m bisexual, and the star was because I really freaking like stars (see above). No regrets, except that I got them done at West Coast really.

Stars Burn and The TV Heart

My biggest tattoo is only one of two I can’t see. I was never big on getting them in places I couldn’t see them but I kinda like the idea of getting this on my back so I went for it. I wrote a poem, called Stars Burn, that has stayed with me after all these years. So much so I got it tattooed on my back. It was done by Alex at Monster Ink, his second tattoo for me after I got the poppy done. I got the little TV/Heart done around the same time cause I’m a huge geek.

I am currently in the process of getting a half leg done. It started innocently enough; one day my wife drew Nandy Bear on my leg with a biro. And being the kinda person who likes Nandy Bear (I bought one on our first trip to the US, in New York) and tattoos, I had it tattooed. Then I started adding to it. A hamster because I’m the hamster whisperer (we owned eight at one point), a vampire hedgehog Bethend drew on some tissue paper she used as wrapping paper for my birthday present one year. I drew Choo-Choo myself; he’s my childhood toy (I still have him).

The Chronicles Of Narnia is my favourite book series, still as an adult. I actually read them all again when I was in the hospital with liver failure about a decade ago. Reepicheep is my favourite from that. Bethend drew the crocodile playing with Snappy one day and he is my little

I had my niece draw me some animals for me and one of the ones she drew was the fat cat. It’s one of bethend’s favourite stories (and the subject of her own ongoing tattoo project). On top of that, after her accident in 2015, she struggled with her memory and speech but could recite the entire story from memory without problems.

I have the address for Earth’s Stargate down the calf of my left leg. For the record, the calf hurts a lot less than the shin. A LOT. I got this for a few reasons. I’m a massive geek at heart. Stargate, Star Trek, Star Wars…I could go on. Stargate SG-1 was pretty much one of the few reasons I am still alive, it’s the reason I got into fanfiction, the reason I realised I was bisexual (hello Amanda Tapping) and the reason I met my best friend of over ten years Melanie (and my son’s godmother). Still, Stargate makes me happy, I still dabble in fanfic for it, still watch it, still love it and want it to return.

So I finally bit the bullet and despite my other leg being a work in progress I got the address done. 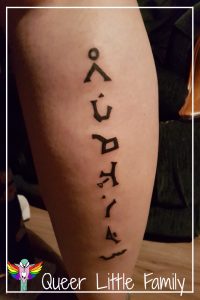 I definitely want some more pride flags on my body. The bi, genderfluid and non-binary ones. I want more geeky tattoos for sure. And of course I want to finish my leg. I have a folder of tattoo ideas – animals I want to add. Snoopy will definitely go on there, Snowy from TinTin, Cinos, a fat hedgehog I drew years ago maybe.

I also want to get my son’s fingerprint (or maybe handprint) tattooed over my heart. I’m waiting until he’s a little older until I get that done. Mostly cause his fingerprint, of course, will be tiny right now and I don’t know how many more kids I’ll have. One more at least I hope.

I will update as time goes on. My next tattoo isn’t until October because that’s how popular Monster Ink is.

And if you have any questions about tattooing, hit me up. I’m not an expert mind, I just have a few now. 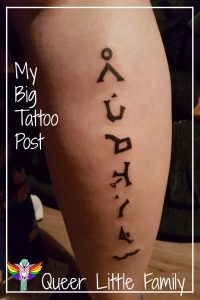