As with Snappy, the blog kinda takes a back seat to the demands of life with a small baby. Apparently, when there is two you add an extra month or two of adjustment before getting back into the blog.

The bottom line to all this is that Beany is doing well. The more complex version is that she’s doing well but it was a rough start. She didn’t put any weight on those first few days. She lost 10% of her birth weight meaning the midwife had to come back a few times to keep weighing her and we had to supplement her feed with formula.

Since then we’ve gone to formula only as she just won’t latch. Even when she’s happy she just unlatched so she could smile at my wife.

Her smile is gorgeous though.

I think, if it weren’t for Covid, she might’ve had a bit better luck with breastfeeding. As it was though, it meant that the breastfeeding consultant was only available over the phone or video and it was really hard to show her exactly what the problem was. Even with a change in position, it didn’t make much difference.

She sleeps a lot better, in that she sleeps at night but she won’t nap for long during the day. Twenty-minute snatches but it was much more than we were getting that first month. She would only sleep if she was held, only sleep if she was in the sling and I spent the first month sleeping on a futon on the floor so my wife could hold her in the bed. It was a months before she even spent more than twenty minutes in the moses basket.

Now she sleeps there all night, waking up for a feed on a good night. Waking up for a feed and a loooong chat on a bad night. At the moment we’re struggling with the day time sleeping. She’s a baby, she needs a lot of sleep. She’s stubborn and fights it. We can sometimes get her to doze, sometimes gt her to fall asleep in the evening in the pushchair though for the past few evenings she has only settled on my wife’s chest next to our old man cat.

It doesn’t help that she’s teething. And has been for a month. It seems to have settled but then, maybe not if she’s this hard to get to sleep.

She talks a lot. Makes a lot of noise. Apparently this morning she was yodelling and she’s been making g noises for the past few days. She’s working on laughing as well, it’s coming, she’s made a noise that is definitely laughter-like.

Snappy was an early talker, but he never had a dummy and had all the attention. Though as he’s at school during the day, Beany’s getting more attention during the week at least. She does have a dummy, mostly because she was just so hard to settle and she’s so stubborn. hopefully, in a couple of months, we can ween her off it and it won’t effect her speech too much.

It’s impossible not to compare Snappy as a baby and Beany. They’re so very different, not just in looks but in all sorts of little ways. Snappy was a colicky baby that I had to squeeze wind out of (sounds bad but it worked) and would just go to sleep draped over my shoulder. Beany just passes gas like a pro, little effort required on my part but won’t sleep until she’s beyond exhausted.

I’m not big on the cry it out method. And what I do sometimes is less cry it out and more, holy crap nothing is helping. Snappy had times like that though, and it took a while to figure out how to get him to sleep. It was a several step process that involved carefully disentangling ourselves from his grip.

We’re still trying to figure out the trick to getting Beany to sleep.

One huge glaring difference is bath time. She hates baths. Hates Them. Snappy loved baths as a baby (still does), he would just bliss out and you could just let him float in the water (with assistance of course).

I can’t even hold Beany in the water. She goes rigid and starts screaming. Tried the bath, tried the sink, she just flings herself backwards away from the water like she’s possessed. I mean she spent nine-month in amniotic fluid, a bit of warm water and some baby shampoo should not be so bad right?

Their relationship is really sweet though. I didn’t really worry too much about how Snappy would feel about her because he’s such a loving little kid. And he does love her, he’s added her on to his list of people he loves. He wants to hold her all the time. Which is fine, except he’s a small four-year-old and she is a chunky four-month-old.

He has struggled with the noise and the change in attention levels he’s getting. We had a few rough days but talked about what was bothering him. He’s sensitive to sound – despite the fact he never stops talking – so it wasn’t really surprising that her crying and screaming was upsetting him.

We talked about it though, being at school helps as he’s not home all day with her. Plus we come up with some plans and things for us all to do to reduce his stress levels (and in turn out stress levels).

I think just talking about it helped, plus when this all happened he was very ill and we all had to self isolate and he’s just started school (more on that later). He knows things are going to be different but it doesn’t mean everything is going to change. We’ve still kept film Friday going since lockdown eased in the county we’ve been back into town on a Saturday for lunch and groceries.

She reacts to him very positively. She smiles at him, reacts to the word brother. He chooses her outfit some mornings and I do wonder who long she’ll let him do that. He stopped letting us chose his outfit years ago.

So that’s a quick, driveby synopsis of Beany at four months old. There’s more to be said. More to discuss about formula feeding, life with two kids, dealing with a newborn in a pandemic.

But for now, she’s healthy, she’s happy and she’s brilliant. 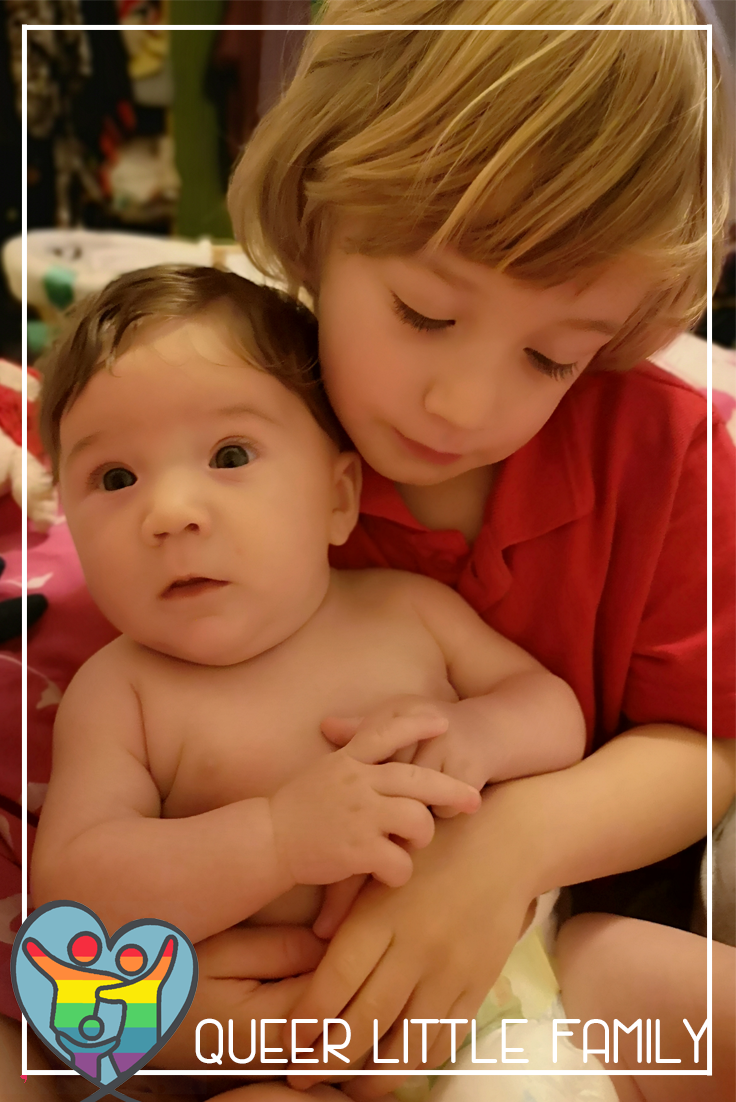