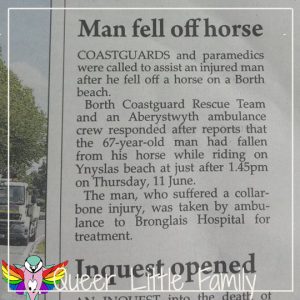 So the local paper for my area is called The Cambrian News. When I was a kid it was a broadsheet size thin thing with some local interest stories and a lot of horses that I needed to spread out on the floor to read. It came out once a week, on Thursdays. At least that’s all I remember being in it. Horses and shows. We went to a lot of shows as kids, Jay – my stepparent – used to show a lot of horses and some dogs. Our front hallway is a very Welsh hallway. Slightly dark and dusty from not being used (cause everyone uses the back door) full of bits of collectables and a lot of rosettes. A lot. And some trophies. And I think some darts ones as well.

Jay played a lot of darts too.

Anyway, the Cambrian News was a very standard rural newspaper for a rural area.

It’s smaller now, tabloid size thicker to some extent – though not every week – even Ceredigion has slow news weeks on rare occasions we have fast ones but only now and then. Okay so now that I think about it, I can’t remember a fast news week. Just slow ones. It’s still weekly, printed on a Tuesday, on sale from Tuesday evening/Wednesday. There are a few different editions, covering the county, but basically from what I can tell it’s a different front page and third page, but the rest is pretty much the same. Maybe the fourth page. I buy the Aberystwyth edition, my colleague buys the South edition so I have read both most weeks, but little is different cause really it’s a big country with a lot of grass and well, and some crime. 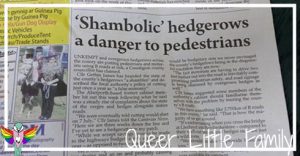 I lived in Leicester for a few years, where the local paper is called The Leicester Mercury and there are two editions a day, six days a week. That’s twelve newspapers. Now, a lot of it is the same from the morning edition to the evening edition – most people I knew read the evening edition because it was effectively the update of the morning newspaper. I’m not sure, I didn’t read it that often for various reasons. I was never that invested in Leicester, not in the same way I am invested in Ceredigion. I had a job, so I didn’t need to check the newspaper for jobs. And the paper was full of news about serious crimes and roadworks. Neither of which I particularly wanted to read about.

Serious stuff happens in Aberystwyth and Ceredigion – it’s not all happy Larry around here. There was a mass brawl outside a put the other week. There are deaths (though few actual murders) and sex offences and drugs and poverty but this stuff is spread out over time. In Leicester this stuff happens more often, is more violent, is more desperate and is all packed in week after week. It’s a big city, though not the worst when it comes to crime but with more people comes more problems and the Leicester Mercury always has more bad news in one edition that The Cambrian does in ten.

But, but what the Cambrian News does have are the headlines of a lifetime. 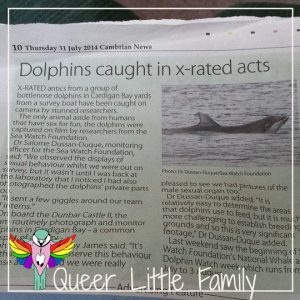 I’ve been collecting some of the best headlines and stories for a few years now. By collecting I mean taking pictures of them and posting them to Facebook to amuse my friends who do not live in the area. Some of the stuff that happens here is completely insane. Sometimes the headlines really make the story. I don’t know if they’re serious if someone is trying to make us laugh.

There is a whole facebook group dedicated to these wonderful headlines. I think I might start posting them here on my blog too. It really is local news at its best.

I wonder if other local papers are like this. I imagine it’s boredom, there’s only so much interest you can get out of writing about car accidents and horses (still a lot of horses). I suppose the other Welsh rural papers are like this in the sparser counties. Places like this in Scotland. I don’t know before I moved to Wales as a child I lived in Coventry and well, much like the Leicester Mercury, the Coventry Evening Telegraph is two editions a day (it was still the Evening Telegraph in the morning – don’t ask) full of horrible stuff and football.

I assume there are places in Scotland like this. Perhaps. Perhaps it’s boredom. Perhaps one guy at the Cambrian fancies himself as a comedian. Perhaps it’s all accidental and I live in a really odd country. Which I know I do – it’s an odd place – once there was a dead shark parked on some double yellow lines in Aberystwyth. We still don’t know how it got there.

Maybe between the sea air and sheep, we’ve finally cracked. Maybe it’s a Welsh thing (my grandfather was Welsh, I’ve been here long enough to identify as Welsh and fit in with this madness).

I love it regardless and I think I’ll be sharing more of these great headlines on my blog in the future.

One Reply to “Man Falls Off Horse (and other tales)”